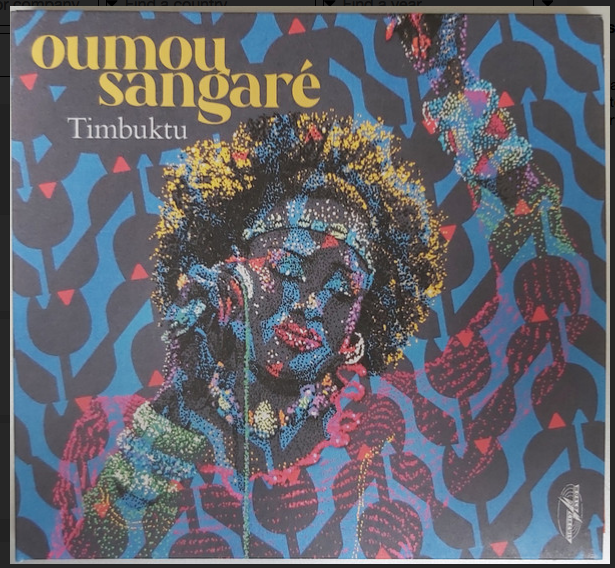 Oumou Sangare is from Mali and well known for her feminist views. This is her latest release (2022). She visited the U.S. in 2020 and got caught in the COVID lockdown. She decided to stay in Balitmore, bought a house and started writing and recording songs for this album. From the U.S. Sagare sings words of praise and caution to the folks back home in Mali, especially its women. Sangare has been rising above setbacks for most of her life. To help her single mother – abandoned by her father – to make ends meet, she sang in the street to raise cash at the age of 5. Sangare went on to win a pre-Kindergarten singing competition and embarked on a career that saw her touring the world. Now she is an iconic performer and successful businesswoman who owns hotels, businesses and a car company in Mali. Accompanied by a chorus of vocals and traditional African instrumentation. Sangare creates a sound that sounds ancient but lives comfortably today. AArbor 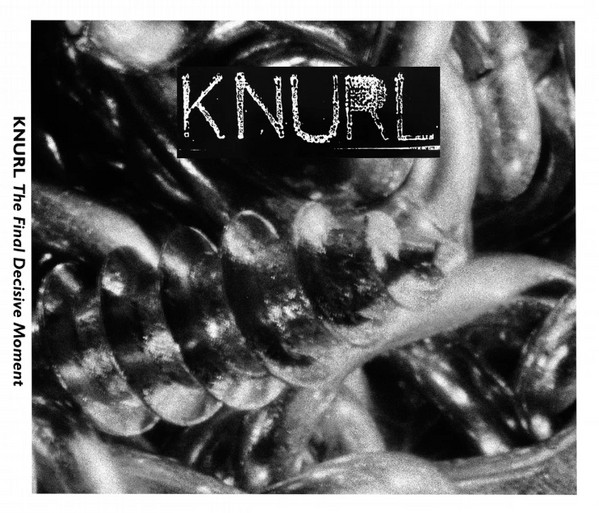 Noise concrete. Mic technique on display in the junkyard garden of cement and steel. Gear grinding of crashed cars, listened to this in part while reading “The Atrocity Exhibition” seemed like a good fit. I preferred “Prime” “Adjustment” and especially “Inferior Elements” – all tracks where some silences serve as shock absorbers or audio igniters. “Inferior Elements” had parts that felt like a better take on Godzilla groans. If you want a more persistent electric feel to the non-organic crash, “Abstraction” might give you that buzz. Knurl is Alan Bloor hailing from Toronto and whaling on disembodied equipment since 1994. Not sure if here he used a bow (seems likely) or effects (maybe not?) here are some videos of earlier performances by him
https://www.youtube.com/user/pantarheirecordings
This was a live 2022 recording, file it under Metal, Actual Metal.
-Thurston Hunger 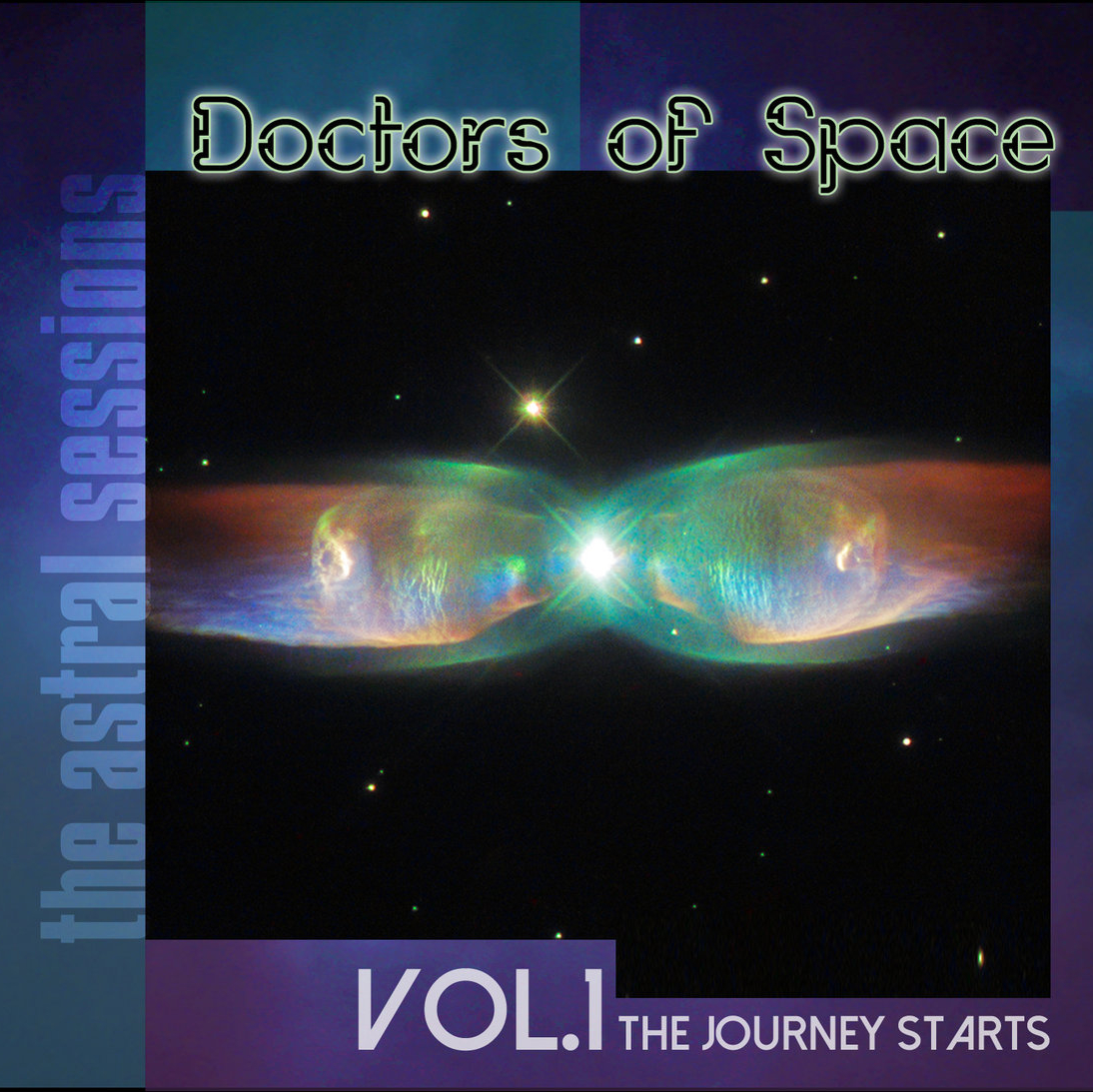 Doctors of Space – “The Astral Sessions Vol. 1: The Journey Starts” 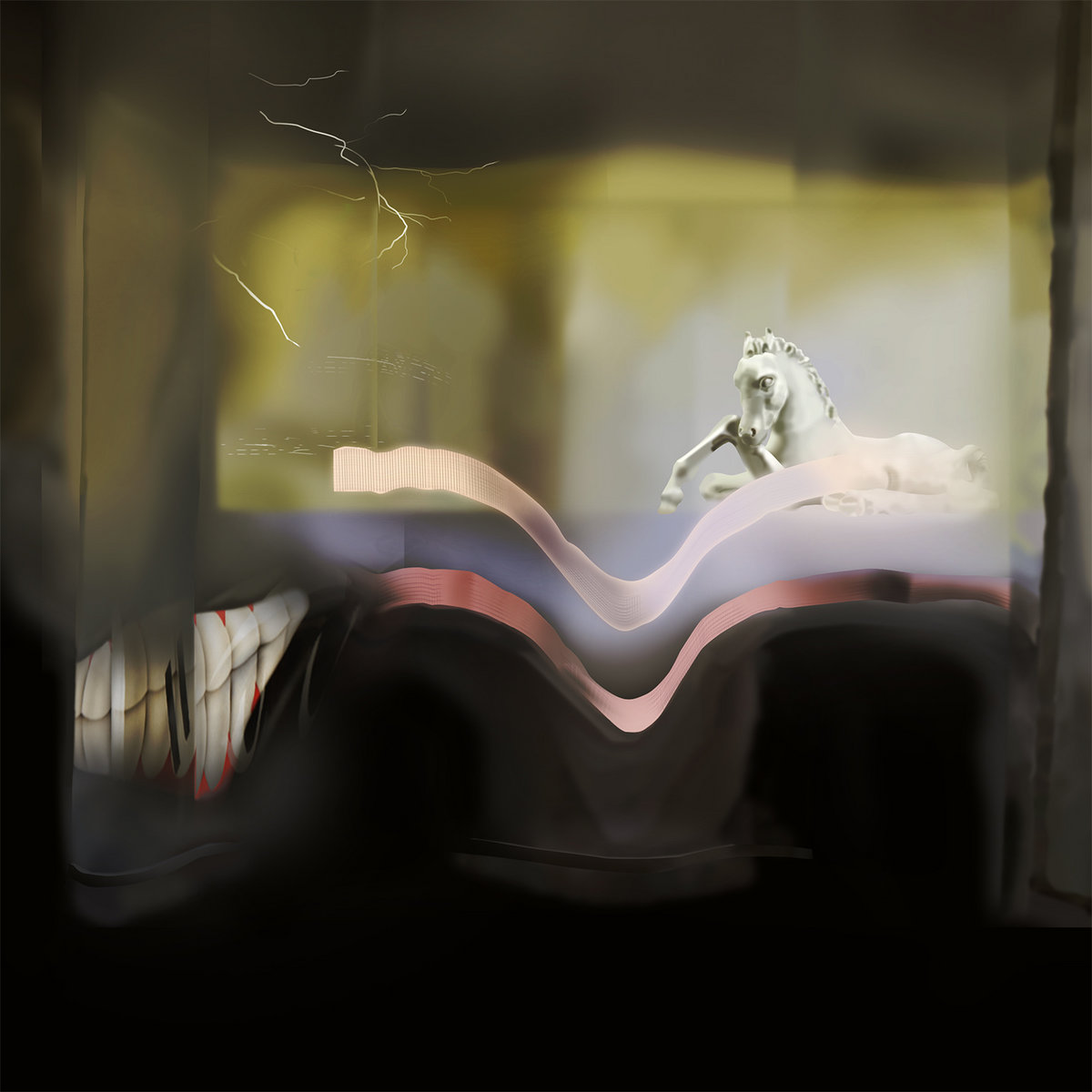 Nick Storring’s eighth album takes the one-person-orchestra approach for which he is acclaimed and translates it to a single instrument: the piano. Recorded on everything from the innards of an old upright piano to a Disklavier (a computer-controlled acoustic piano) housed at Yamaha’s Toronto offices, and using playing techniques that span conventional to idiosyncratic, Storring conjures a vast and vivid color palette. Music from Wéi was composed for the choreography of his frequent collaborator Yvonne Ng. This layered, multi-tracked score moves fluidly between tender lyrical phrases and driving interlocking figures, and from thick textural swarms to supple transparency. Nick is not afraid of near silence during these relaxed passages. You can almost see the dancers moving gently to the music. 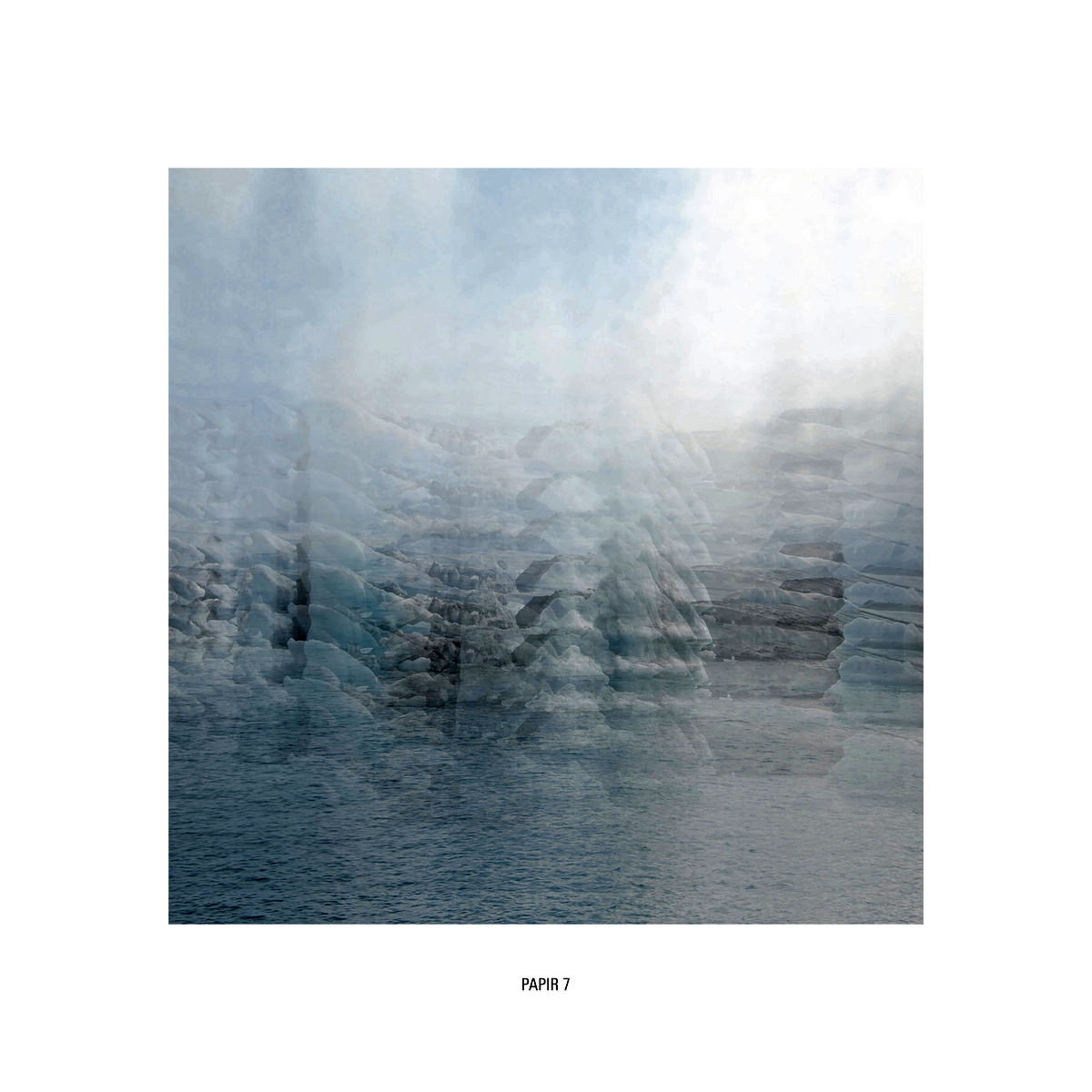 Papir might be the ultimate expression of the Danish creative soul: distinctively modern, deceptively minimalistic, and stylish yet understated. Papir follow their own road map, creating music with little interest in playing to the masses or catering to a specific genre. The band’s output has varied from epic psychedelic guitar meltdowns à la Earthless to sweeping, reverb-drenched soundscapes…  Many aspects of Papir’s music seem to have much in common with the sea – be it a willful association by the Copenhagen-based trio or not. Their output moves in waves, sometimes fierce and blustery, sometimes gentle and calming, but always performed with unforced, organic talent. 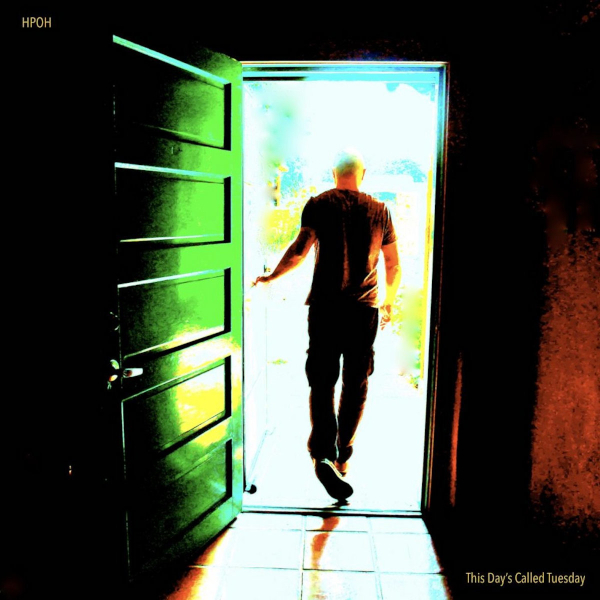 Thollem is a Bay Area artist “who has released approximately 100 albums on 23 different vanguard labels, both solo and collaborative,” since 2005.

This is perhaps the ultimate expression of a pandemic lockdown album, solo composed and recorded while doomscrolling the news over the past two years. Stream-of-consciousness lyrics, sung and spoken in what can be almost a whisper of a voice, sometimes so faint you think he might be singing in another language, accompanied by a keyboard with some seriously analog-sounding patches and a TR-808 plug-in, all done in one take, with no overdubs.

Think of it as a mashup of late-70s minimalist synth acts on both sides of the pond (Suicide, Human Sexual Response, The Normal, Soft Cell), Pere Ubu, NON, Loaded-era Velvets, 60s protest folk music, and narrative poetry, all passed through a filter of ennui and exasperation. It’s a whisper, not a scream. 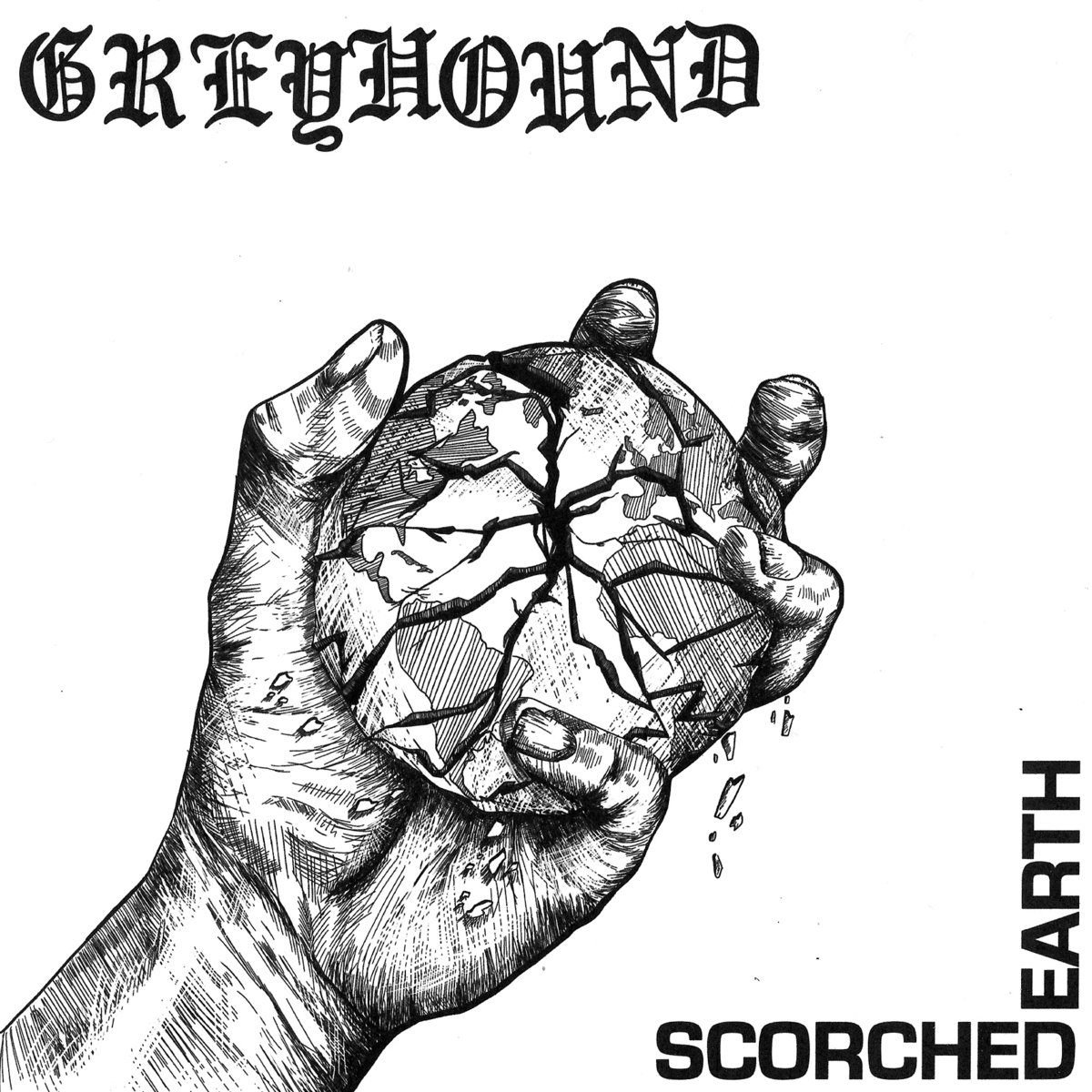 An impassioned sonic treatise on survival in a system designed to crush the individual, the iconoclast, and the marginalized, with a bit of genre cross pollination and a furious delivery by their powerful and very present front person who espoused an unrelenting spite for the crumbling empire. Greyhound opened for Negative Approach a little while back and I was impressed by the intensity of the performance by Ry, who was the embodiment of ferocity before a ragtag group of misfits who clearly appreciate some of the musical arenas I had orbited in my youth. Kinda felt like the old days, sans emphasis on adhering to scene approved costumes. My assumption is these weirdos don’t give a fuck about your fashion sense, they play fast, hard, and mean with only a single song that might be considered vulgar by the…

Though the use of prolonged guitar feedback might be dissonant or even distasteful to some; it is hardly obscene, nor will it incur fines, and sounds, to this miserable volunteer, like heavenly minstrels rejoicing in the divine light of pure, eternal, unconditional love. 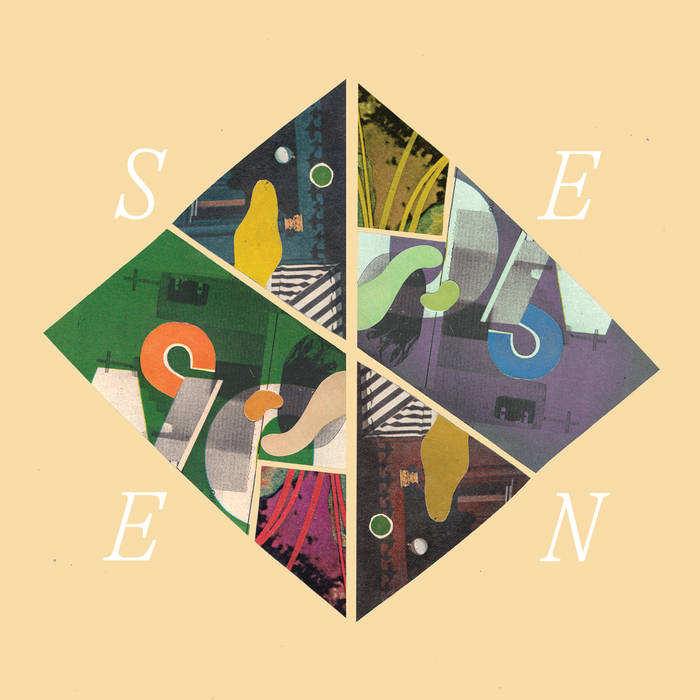 Performed by Canadian accordionist Joseph Petric, this 2022 release is a collection of commissioned songs from various artists over Petric’s long and fairly prolific career. The album’s title work SEEN, a three-part work by Norbert Palej, is intended as a demonstration in spiritual contemplative movement through the accordion’s “intimate” respirations and it is easy to hear as such throughout all three “visions”. A standout track, Pneuma (track 7) was written and produced in 1986 by composer and music curator Peter Hatch; it contains computerized “improvisation” originally created through the use of software of the Yamaha CX5M that has since been imported to Max/MSP due to the obsoletion of said hardware. Nevertheless this track evokes a very surreal and unsettling feel with the use of these computer generated chirps that break through the tracks acoustic sound. Tracks run from 7 minutes and 34 seconds to 14 minutes and 52 seconds, so settle in and enjoy. I would also like to note that SEEN is dedicated to the memory of Leo Niemi (1931-2021), who built and maintained the instrument heard on SEEN. 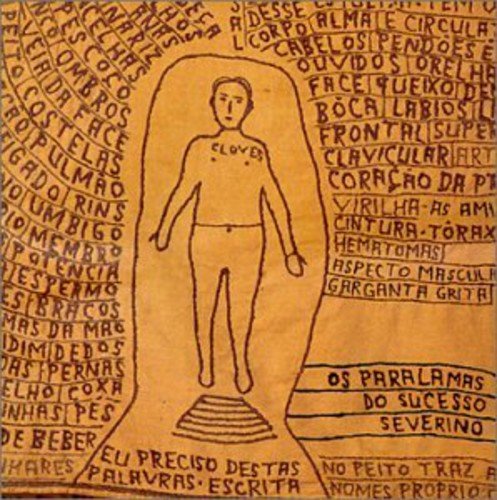 This is Os Paralamas Do Sucesso’s 7th album from 1994 produced by Phil Manzanera – it is considered to be their most experimental album. Os Paralamas is a 3-piece Brazilian rock band. As you listen to the songs you’ll notice that the introduction to each track is different than then rest of the track.

Queen guitarist Brian May makes a special appearance on this album, providing guitars for track 6. Other musicians of interest include Linton Kwesi Johnson (dub poet of Windrush generation – London is the Place for Me) and Tom Ze [track 7]. The album’s cover was drawn by a famous schizophrenic artist from Northeast Brazil: Arthur Bispo do Rosário. AArbor 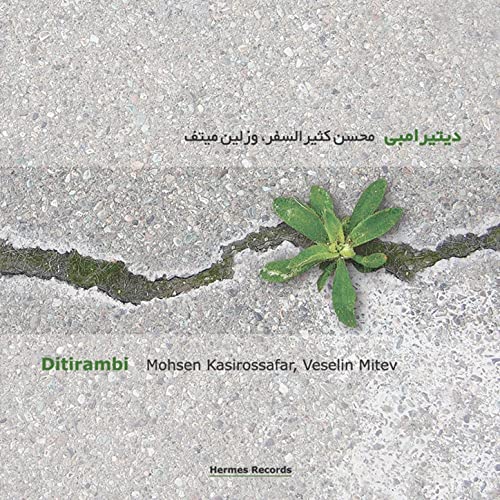 Mohsen Karossafar is Iranian and is the percussionist here. He lives in Rome and works with many known musicians and composers including Ennio Morricone. Veselin Mitev is from Bulgaria. Here he sings the vocals, plays the gaida (Bulgarian bagpipes), and the kaval (Bulgarian flute). This is modern music which melds ancient Indo-European musical cultures creating atmospheres informed by legend. AArbor