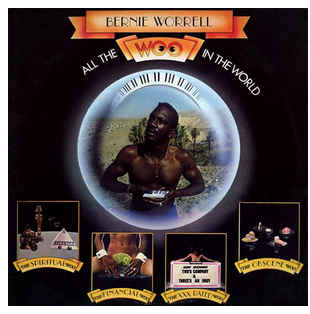 Worrell, Bernie – "All The Woo In The World" – [Tidal Waves Music]

Bernie Worrell (who died in 2016) was a founding member of Parliament/Funkadelic, also known for his work with Talking Heads. This is his first solo album, originally released in 1978. Featured artists include: P-Funk alums like George Clinton, Bootsy Collins, Maceo Parker, Fred Wesley and Eddie Hazel. One reviewer described it as “so funky you can smell it through the dust jacket.” This beautiful slab of orange vinyl has much of what you’d expect from Funkadelic: layered sounds, amazing horns, toe-tapping midtempo beat – a classic platter of cosmic slop. AArbor 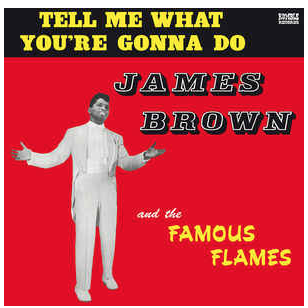 Brown, James and The Famous Flames – "Tell Me What You're Gonna Do" – [Rumble Records]

This is a 2015 re-release of an early 1960’s album by James Brown and the Famous Flames when they’d had a few hits, but hadn’t quite made the big time. James has gone beyond just being a “blues singer” or a gospel singer and is singing ballads and covers here as well. What I love is the energy and intensity of his singing here – a star on the way to super stardom. AArbor 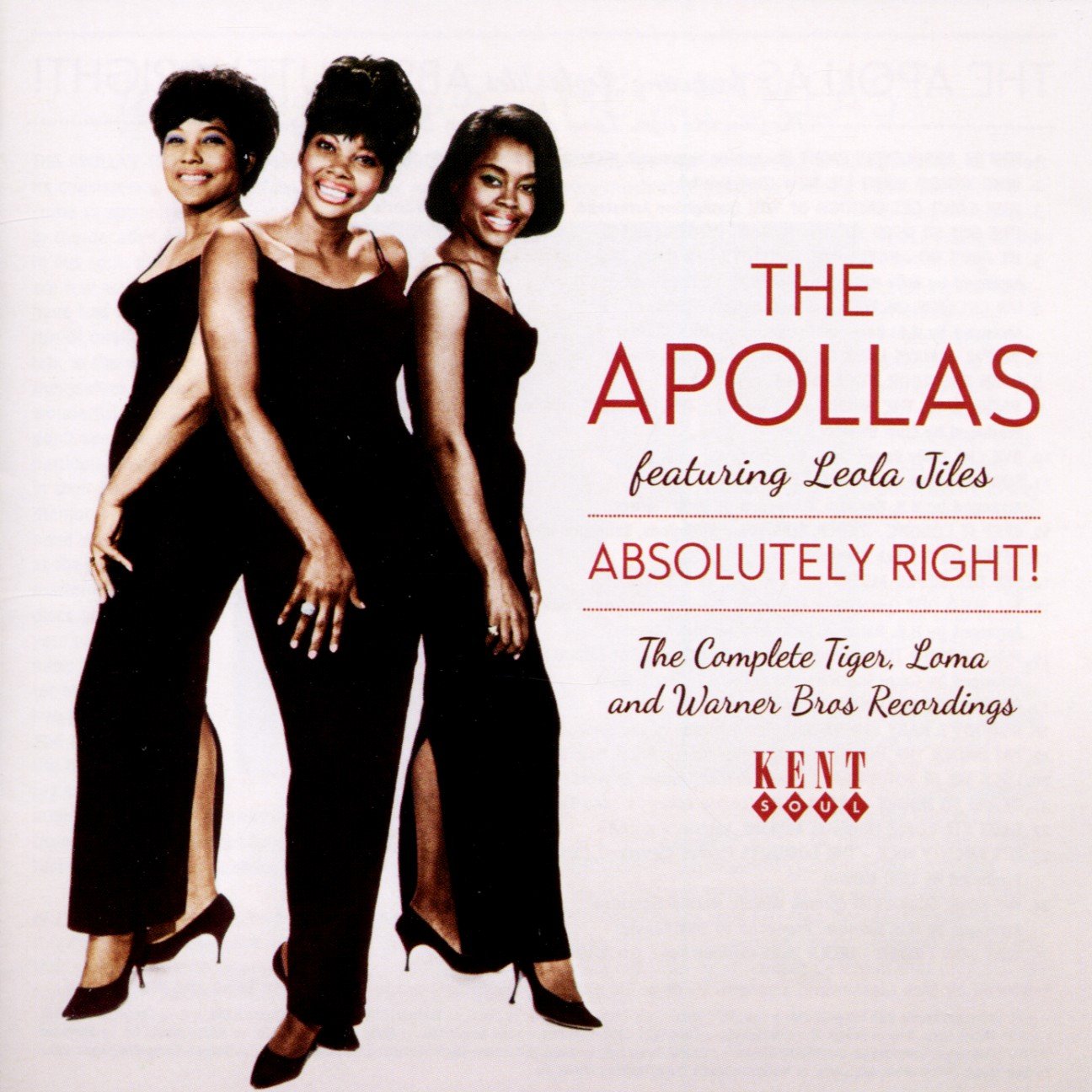 Originally called The Lovejoys, The Apollas were considered the Warner Brothers equivalent of the Supremes. Beginning in the early 60s as a quartet from The Bay Area, including one male singer, Ronnie Brown, they eventually ended as a trio anchored by the powerful growl of Leola Jiles. By her side was Ella Jamerson, and a rotating 3rd member (Originally 17-year-old Joann Forks, then Dorothy Ramsey, Billie Barnum, and briefly Blondell Breed). WB released their music on their short-lived LOMA soul imprint, before converting them back the main label for the remainder of their contract. During that time, they opened for Barbra Streisand and the Monkees, and performed on many nationally syndicated TV shows. Towards the end of the 1960s they toured extensively in Asia. The group called it quits in the early 70s due to a failure to break through commercially. Dick Glasser, who signed Jiles to a solo contract (stop me if you’ve heard this one) then promptly refused to let her audition under fair terms as the new lead singer of the Supremes, dashed her hopes for a mainstream career. However, the group singles found a new and enthusiastic audience in London’s Northern Soul scene. Since disbanding, all members have continued to perform as professional back- up singers, along with occasional solo tours, and most recently a reunion in UK in 2007. This is wonderful. A nice mix of upbeat RnB rockers, soulful strings, and melancholy heartbreak. Leola Jiles spectacular lead vocals burn hot and are very distinctive and memorable in my book. I’m glad we have the opportunity to share this collection, which includes some of Jiles solo cuts, with our listeners. 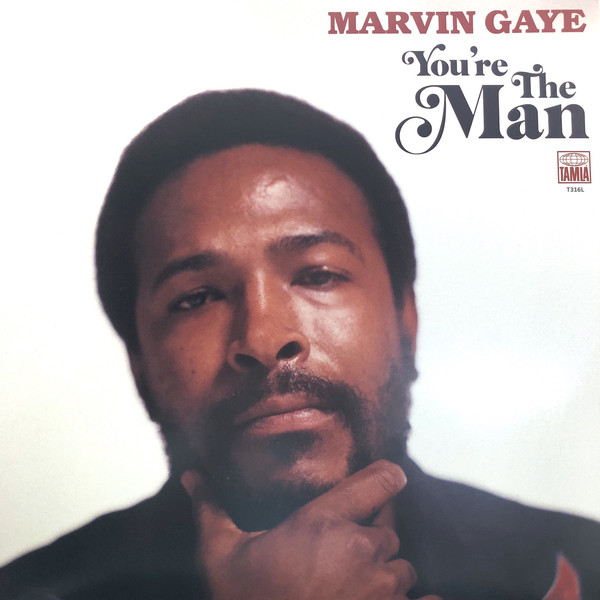 From 1972 when George McGovern ran against Nixon in the presidential race and a lost year in the life of Marvin Gaye. The title track like its predecessor “What’s Going On” is clearly political but nowhere near as powerful. The issues may be different today but the message is still relevant.    I liked the B sides of both of the records. Apparently Stevie Wonder gave Marvin Gaye a brand new Moog (which had just come out) it appears on the instrumental Christmas in the City and is cool. AArbor 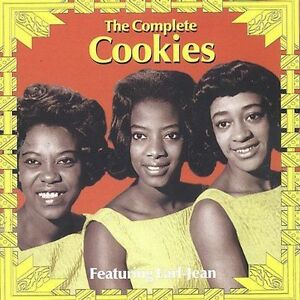 Fun, smooth, sweet as a toothache, and impossibly catchy, these ladies make me want to find some friends to dress in matching outfits, tease my hair to the sky, and choreograph synchronized dance moves. Their harmonies are tight, the hand claps and doo-wahs are on point, and there is a confidence to these tunes that make it way more about finding personal strength through teenage heartbreak than just chasing stupid boys. A product of the Carole King / Gerry Goffin hit machine. Masterfully produced early 60s girl group sound. The trio, who started out as backup singers for Little Eva on her King/Goffin smash, “Locomotion” featured Earl–Jean McCrea, Dorothy Jones, and Margaret Ross. They had worked on other various songs in 1962, but working after working with King, they moved from background to foreground. In a bit of scandal, Earl-Jean ended up giving birth to a baby girl in 1964 fathered by Gerry Goffin, who was married to Carole King at the time. She ended up retiring from music, and by 1967, The Cookies had disbanded. Dorothy Jones has since passed away, but Margaret Ross still tours as The Cookies on occasion with two other new backup singers. 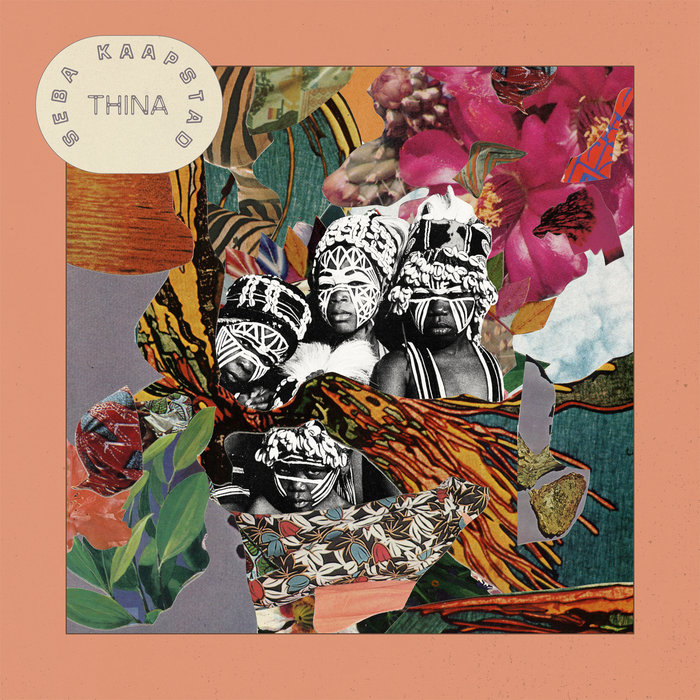 Groovy neo-soul from a multi-cultural quartet of 2 singer/songwriters from South Africa, and 2 German multi-instrumentalists, equally contributing to the intriguing sound tapestry presented.  There is piano, synth, drums, guitar, and strings. This is lovely and mellow, shimmering with positivity and upbeat in a very relaxing way.  The lyrics never get too preachy, just contemplative in an existential way that can make even the most cynical of listeners stop and consider getting out of your own head for a while. Take a look at the world around you to consider others, their existence, and how you can relate and connect. 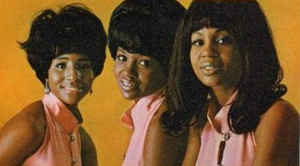 The Flirtations (Sisters Ernestine and Shirley Pearce, along with friend Vie Billups, who also performs under the moniker of Pearly Gates) began as a 4 piece with their other sister Betty and Lestine Johnson in NYC in 1960. After recording a few singles and mild success domestically, they were convinced to relocate to the UK where Northern Soul was still very popular. They hooked up with producer Wayne Bickerton and writer Tony Waddington, and released their debt full length album on Decca. They have recorded and performed ever since, working with several different labels.

FAST FACT: Their big single (Track 1) was used in a KFC advertisement campaign in 2007. 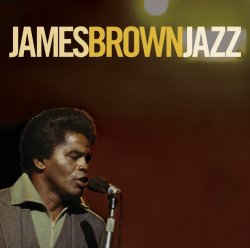 Over six decades of recording, Brown touched on jazz in a variety of projects – first, as an organist with his own hard swinging group; then a couple of vocal albums, one with a cocktail trio, another with Louis Bellson’s big band. There’s also JB’s tribute to fellow King Records artist Little Willie John that fired up his jazz influences. Despite being an influential funk band ever, JB’s band also introduced trumpeter Waymon Reed, trombonist Fred Wesley and saxophonists Alfred “Pee Wee” Ellis and Maceo Parker, all of whom had enviable jazz credentials. (Parker’s rousing performance on “There” is thought to be his first recorded solo.) There are some highlights — a number of tracks are rare versions or previously unreleased — including “That’s My Desire (alt. mix)”, “After You’re Through (extended version)”, “Tengo Tango”, “Home At Last (alt. mix)”, “There (unreleased version)”, “What Do You Like (stereo single edit)”, “Go On Now (alt. mix.)”, “For Once In My Life (alt. mix)” and “Cottage for Sale (alt. mix)”. The material is from the 1960s and ’70s, and features a number of alternate mixes and singles edits, some of which have never been released.

This album really doesn’t belong in the Soul Library, even is JB is the “Godfather of Soul”. There’s more Jazz than Soul here. – Reviewed by Ann Arbor, April 8, 2009. 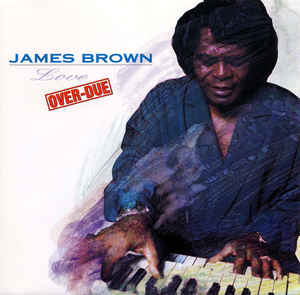 No one (except maybe Kevin O’Dante or the Reverend Dah) is a bigger JB fan than me, but just the same, I was prepared to hate this. Guess what? It’s not half bad. Not every tune is brilliant (they range from some smokin’ funk to some too-slick ballads) but there’s way more than enough to justify its existence, as well as some damn fine moments. Well done, JB! – Reviewed by Johnny P, September 21, 1994. 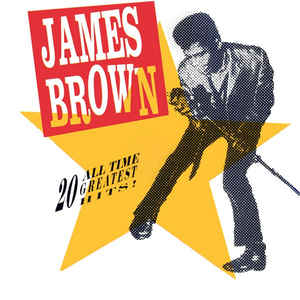 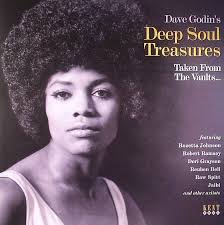 A compilation of “Deep Soul”* (soul from America that never found a wide audience in America) selected by the late Dave Godin, a UK Record shop owner and soul music enthusiast who coined the phrase*. There are a few familiar names on here…Irma Thomas, Ruby Andrews…other than that, mostly artists new to me, including some artists that there is little to no info on. Love and pain, both political and personal can be found on these recordings spanning the years of 1966-1973, which as we know was a time of turmoil and big change in this country. My personal standouts: A3, A4, and the first three tracks on side B, which cook!! 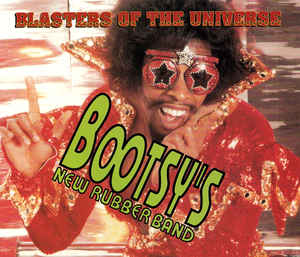 This double Bootsy-blast dates from way back in 1994, but it hasn’t aged a bit. The Boots takes all the lessons he learned from he sojourn with James Brown and Funkadelic and distills them down to two hours of solid boogie! The tracks on Disc 2 are extra-funkified version of Disc 1 tracks, without the banter. Any of the tracks will boil water but go for CD2 if you really want to blow your speakers. Reviewed by Goodwrench, January 14, 2015. 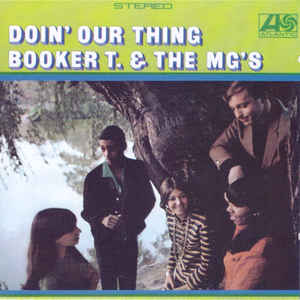 Just the usual here. Which is to say fabulous, sophisticated, funky, stripped-down, skeletal, sublime R&B. By this time (1968), the MGs were puttin’ it down like single malt scotch. Nice. Very nice. Reviewed by Johnny P., September 2, 1992. 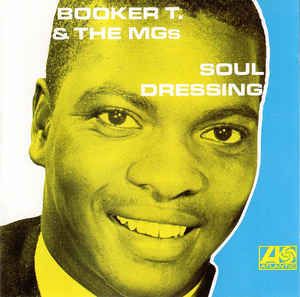 A collection of cuts recorded at various times during ’62, ’63 and ’64, some with Lewis Steinberg on bass and the rest with his replacement, the legendary Duck Dunn. The music itself is the Stax sound stripped to its essentials and sinew. Glorious, glorious stuff. Reviewed by Johnny P., January 8, 1992. 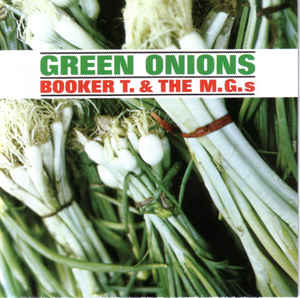 The first Booker T. & the MG’s album (1962) and this provided the blueprint for it all. Not just this band but the entire Stax/Volt sound and aesthetic. Stripped down, no-bullshit ensemble playing. Pre-Duck Dunn with Lewis Steinberg on bass. – Reviewed by Johnny P., February 12, 1992. 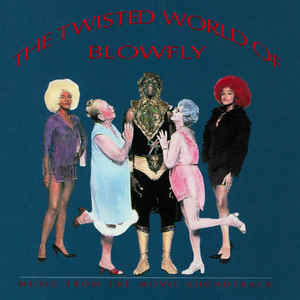 While many Johnny-come-latelys having been using the foul word as a career (2 Live Crew, etc.), the man called Blowfly has been doing it for more than thirty years. He’s like a R’n’B Redd Foxx. This is all old material, but new versions helped out by members of Fishbone and The Red Hot Chili Peppers. Some are lame, but most aren’t. Reviewed by Lucifer, July 3, 1991. 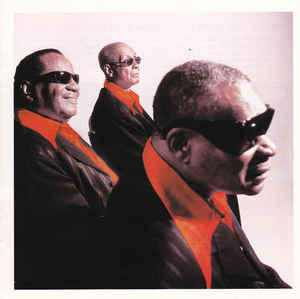 This group has been around for 7 decades! Since forming their group at the Alabama Institute for the Negro Blind in 1939, they have kept alive the spirit and energy of pure soul gospel music. The Blind Boys’ music has not only endured, but thrived, helping both to define the sound of the American south and to push it forward through the 20th century and well on into the 21st. This is one of their best known albums (a Grammy winner) from 2002. The sound is fresh and often more gutsy than traditional gospel music. The best known tracks on this album are: “People Get Ready”[1] and “I Shall Not Walk Alone”[11]. I especially like [9] and [10]. Reviewed by Ann Arbor, May 23, 2018. 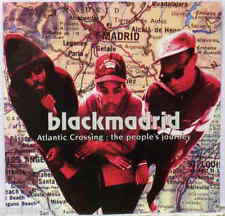 Spoken word with forays into minimal song structures, like Ginsberg meets Last Poets. Homeboys of Wanda Coleman. Dropping science on Columbus, colonialism and other historical matters. Not as boring as that sounds, cheeze. – Reviewed by Bloat, April 8, 1992. 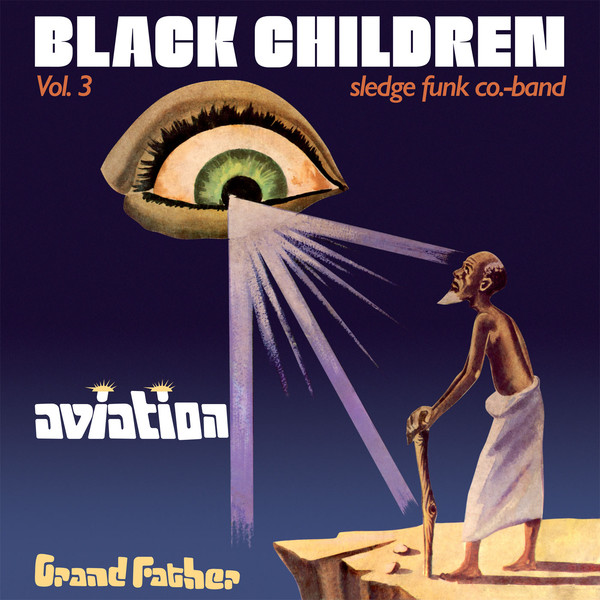 Nigerian psych rock. Re-issue of 1979 album. This was the band’s third album, Vol. 3: Aviation Grand Father, is soul, funk, jazz and a little bit of early synth. In the mid-sevens Nigeria, everybody loved the Black Children Sledge Funk Co. Band. Blasting out of the bustling river port of Onitsha, their infectious, feel-good grooves were the perfect antidote to the dark economic clouds gathering over the country. Everyone in the band changed their last name to Black. Last track is an instrumental. – Reviewed by Carson Street, January 31, 2018. 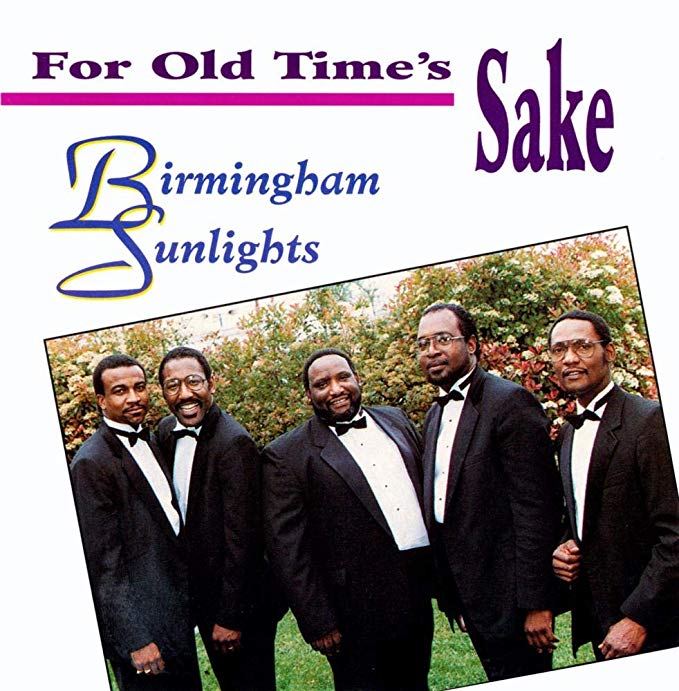 The Sunlights are a dynamic young a cappella gospel group. They hail from Jefferson County, Alabama, where gospel music has flourished since the turn of the century. The Sunlights have received priceless instruction from groups like the Four Eagles and the Sterling Jubilees, and have taken that technical know-how and combined it with unusual syncopation for a fresh sound. This is lively, fervent, joyous stuff. Please enjoy.

P.S. Note there are 5 singers in this quartet — a fifth voice was added so the lead singer can “step out front” for long solo passages without sacrificing the groups 4-part harmony. – Reviewed by Peggy O, August 26, 1992