Marquis De Portago, The – “Story of Racing’s Most Colorful Driver, The” – [Riverside]

A toast to the time when white European wealthy aristocrats concerned themselves with such endeavors as raising horses for polo, flying fast planes, hunting, gambling, womanizing, buying chateaus, driving fast cars. This unique piece is about The Marquis de Portago, one of those wealthy aristocrats, and is told through interviews and in The Marquis’ own words. The comfortable arrogance with which these men speak is nostalgic of those times that some folks think we should go back to. Between cigarettes and bourbon, the talk is of fast cars, powerful engines, dinners with the heads of Italian car companies, racing the European circuit, women, the honor of driving, a love of their fellow male car driver, death and winning. The Marquis de Portago’s voice is sensual, assured, sliding from one sound the next. He is comfortable with himself.
Oh, he dies in the end. Great for mixing.

Darlene and Jonathan Edwards – who in real life were singer Jo Stafford and her husband pianist Paul Weston – started entertaining their friends by singing and playing just off key and went on to record the zany results. This album is hilarious with runaway arpeggios, occasional wrong notes, sour vocals, near misses of cocktail music cliches, and odd percussion including chimes added for emphasis. Especially recommended are the vocal tracks, noted on back of album.

PGM: Scratch of beginning of Side 2 diminishes on later tracks; actually sounds appropriate for the material.

Close, Del – “”Do It Yourself” Psychoanalysis Kit, The” – [Hanover-Signature]

Brilliant. Simply brilliant. Del Close, actor, comedian, father of modern improvisation, does it wildly with “The ‘Do It Yourself Psychoanalysis Kit'”. Using the best Freudian terminology, Close guides you through what psychoanalysis is, lets you test yourself, then lets you listen to Dr. Sigfried Gestalt as he analyzes a patient. In just 40 minutes you too, can set up a couch and let clients lie back and tell you their craziest experiences. A gem from the Hanover Signature Record Corporation.

Someone must have slipped something in Rusty and Sparky’s Ovaltine ’cause these kids be trippin’. Two sides of whack-a-doodle nonsense, drug induced psychedelia put out by Capitol for children under the ruse of fun lessons about the orchestra and why you should stick to the instrument you were forced to learn by your parents. Music by the magnificent Billy May, a fixture on the Big Band scene (Glenn Miller), arranger for Sinatra, Crosby, Andrew Sisters, Nat, Rosemary Clooney and on and on and on, plus TV and movies. It’s full on orchestration to accompany the journey of Rusty (the young Henry Blair) as he is introduced to talking instruments, all voiced by master voice over actor, 5ft 2 Mr. Billy Bletcher. The second side has Rusty debating with his bud Sparky about the pros and cons of piano vs violin. Like all great philosophical debates, the process and journey is more interesting than the outcome. Listen in and hear if Rusty learns a valuable lesson.

Alan Burke was a talk show personality broadcasting on WNEW-TV in New York. Supposedly outspoken and welcome to talk and debate with those willing to take on the challenge, Burke said he was a man “who puts down phonies and poseurs on one hand and loves little children with the other.” Eewwww. He likes to listen to seagulls, has an enormous appeal to women and is also a poet. He’s also a bit of a pompous ass, which makes this recording all the more enjoyable. 16 love poems with a cocktail lounge soundtrack, Burke’s “sensual” voice attempts to lure the listeners (hey LADIES) into his seductive trance. With lines like “I planted olive groves in Lebanon, and you drank from the Milky Way,” and “We kissed in a universe, and you bore my sons and daughters” (that’s right lady, MY sons and daughters), many will be stripping down and getting ready to get down. The way Alan reads, with many pauses makes for some interesting mixing. I found it quite successful to simply drop the needle anywhere, play one phrase, pick it up, drop it somewhere else, play a phrase, repeat, continue. I was in tears, my sides hurt, and I had to catch my breath. Now that’s a love poem.

Andrew Weil MD, Integrative Medicine specialist from Tucson, Arizona, has put together 8 tracks of guided meditation that will help you make it on this plane, and get ready for the next. With the musical assistance of the Archangelos Chamber Ensemble (specialize in performing psychoacoustically designed music), Andrew takes you on a meditative journey fit to heal the soul and the mind. The good doctor’s soothing, but in charge voice, tells you when to meditate, for how long, on what and why. But the best part of this gem are the situations he has you imagine to help you become one with. For instance, on “Healing Yourself” he has you imagine slicing open your hand with a knife when working in the kitchen. Watch the blood as it goes down your arm. Then experience the healing. It actually made me feel anxious more than calm. Which I love. The musical accompaniment lends itself to your journey. Flow with the strings, flute, sarod, koto and tibetan bells (of course). Open your show with a meditation. Help the listeners understand the power of KFJC. Namaste. 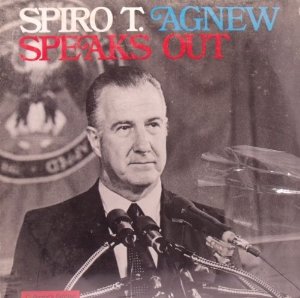 Vice President from ’69-’73 under Richard Nixon. Republican ramblings and rants on: hippies, the Vietnam War, the Democratic party, and the responsibility of journalists. Excerpts from speeches, no music, all dry. The only other sound on here is applause after every couple sentences, which is a little annoying.

Either way, good album for the mix-masters of a babbling right-wing politician making “official” remarks. This is sure to be a Dave Emory favorite! 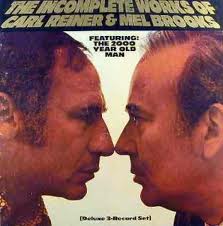 Carl Reiner and Mel Brooks team up as one of the best comedy duos I’ve never heard before, and what a treat to check out this triple LP. The whole 2000 year old man series is freaking hilarious, ??but the whole thing, each little sketch still stands the test of time from In A Coffeehouse to The Psychiatrist to The Cannes Film Festival.

All the bits are pretty much Reiner asking Brooks, acting as different characters, improvising hilarious answers back at Reiner. The hilarity really comes in Brooks’ delivery and timing, he answers the questions almost immediately. There’s a track on here for everybody and it’s pretty easy to figure out what it’s about by the title. There’s no music so it’s easy to mix with, and it’s pretty fucking funny. Throw it on and get ready to laugh out loud… 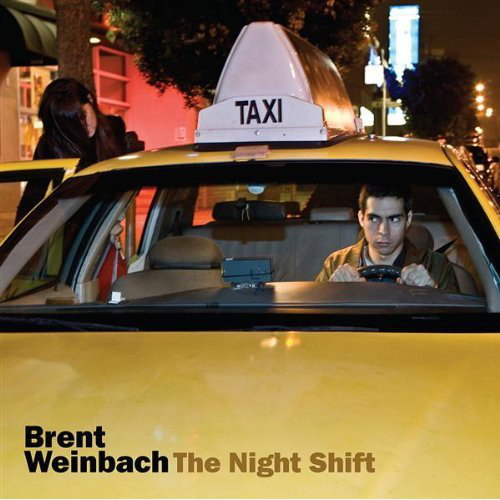 Rapid-fire ire from a man who can still burn any celebrity roast. This
is basically an improv session, with Rickles rarely missing a beat;
well when someone pulls a rodeo out of thin air, Rickles isn’t able to
lasso anything too quickly… Sure much of this humor is based on pop
culture riffing from the day (this panel-prompted session was captured
in 1969) it may lose some people, but it’s almost like an askew angle
on history. (And an angle on Agnew history too). My wife on listening to
this thought Rickles wasn’t being as caustic as she remembers, of course
that could also be a product of shifting mores. Rickles was uniquely
scandalous at this time. Still his delivery and his tone can often carry
the laughter, you just don’t hear people like this any more. Indeed, what
is wrong with “The Tonight Show” (I assume it is as deplorable as it was
ten+ years ago) is its *lack* of reckless Rickles-ness. Weak punch-lines
that arrive two weeks too late; no improv; no risk and most importantly
insults that are built upon the stupidity of the insultee, as opposed to
the cleverness of the insulter. It’s as if someone thought it was just
funny to call another person a hockey puck, without skillfully slapping
them around first! Play this and congratulate your listeners who laugh
on being alive, like the Merchant of Venom himself!

What separates some stand-up schmuck from
the superstars of comedy? With the latter
you get a small glimpse of the ironic dark
wells of pain obscured by the limelight
and the laughter. Here, if you listen
carefully through the zingers, you can hear
the confession of a tortured man in a bad
suit…well, almost if Neil would quit
milkin’ your funny bone. Sure there’s one
or two klunkers here, as Neil deals with
the minor travails of the travelling comic-
the irate then awol manager, the interrup-
tion of the bar jukebox, the fact that the
audience doesn’t speak a lick o’ English…
but in the end, the great ones triumph. And
when Neil says, “Am I through?” You pray to
HBO he isn’t? The silence would hurt too
much. Fuck dentists, I’m a Hamburger Helper!
-Thurston Hunger

The combination of pizza and hamburger has always been so
promising, but ultimately unsatisfying…until NOW! Riding
the popular documentary craze, we get a snapshot of history
from the upper crust (“popular young President John F Kennedy
counts down the months until his tragic assassination”) to
the downright greasy, Roan O’Laird. To keep things dry if not
droll, there are moments of little misdirection (e.g. “He died
doing what he loved best…he shot himself in the head.”)
Olives the color of grief, sauce the color of blood, and
of course humor the color of a mirror…a broken one. There’s
a kaleidoscope of characters on this release wilting and
wonderful like the three-week old offerings at the salad bar.
But the comedy here is just as tasty as Di Presa’s pizza as
O’Laird proclaims…
“The food came in contact with love.
Too much love stains on the counter,
wiping rag drenched in love.”
Just as we’ve always suspected! Neil Hambrger *is* the
secret sauce and this is a sure bet, like the 1966 Superbowl.
-Thurston Hunger
Dirty moments – #1, #6, #8, #9
PS Is that New Session Person Ken Griffin guesting on organ?

A hard call between spoken word and Comedy, but I think Southern would have wanted to be in that category. He was a contemporary of W.S. Burroughs, Lenny Bruce and the Beats of the late 1950s, but he was also a major influence on the young writers of the National Lampoon generation. His writing included “Candy,” “The Magic Christian,” and the screenplays for “Barbarella,” “Dr. Strangelove” and “Easy Rider.” among many others. This recording is a collection of some of his readings and comedy productions, done by him and his friends (including Michael O’Donoghue and Martin Mull.) Not everything is a real winner, as satire & “black comedy” can be a very fine edged sword. Terry Southern died in 1995 at the age of 71 after a long spell of not doing too much…
MOST OF THIS HAS TONS OF “BAD LANGUAGE & PRURIENT CONTENT” AND CANNOT BE PLAYED DURING THE 6AM-10PM TIME PERIOD. PERIOD!!!!!!
*review by Studebaker Hawk

Back in 1958 Mad Magazine was not as juvenile as it is now – adults could read it without too much shame. From time to time the magazine produced recordings, this was their first attempt. With a studio orchestra led by Bernie Green, a TV and movie soundtrack writer/conductor plus the very dry humor of Henry Morgan on some tracks, this is a very mixed bag of trash. Nowhere near as funny as earlier Spike Jones or the Hoffnung festivals recorded in the late 1950s (or PDQ Bach later on,) but for it’s time I guess it is OK stuff. Apply to Affected Areas, Close Cover Before Striking and RUN AWAY! RUN AWAY! RUN AWAY!
(I don’t think this is an authorized in USA issue – there is no mention of it on the official Mad Magazine website…) *review by Studebaker Hawk