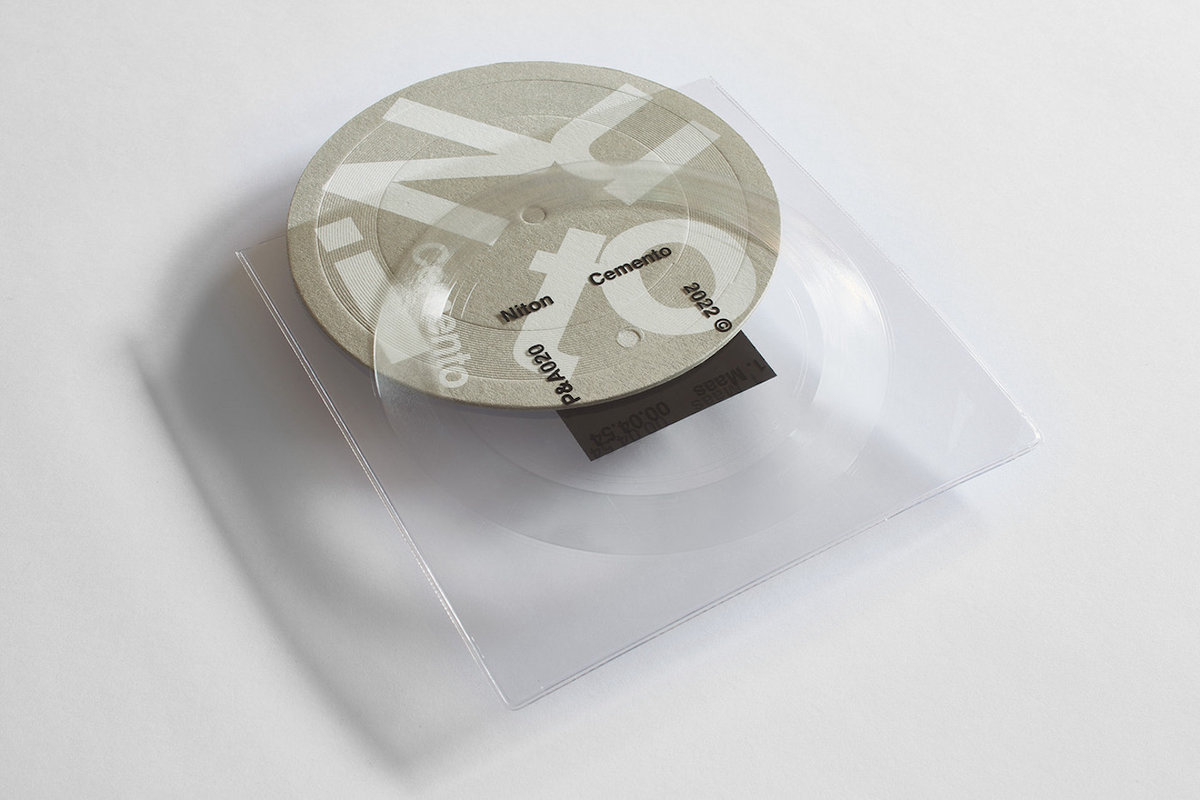 Companion “record” to the excellent Cemento 3D cd. This has an excerpt of the audio sculpture “Maas” from Niton, a 3-piece electroacoustic project that straddles the Italo/Swiss boundaries and sonically straddles prog/industrial regions. Other pieces on the full length have more prominent electro-cello, this is more pulse/wave/squelch electronics. Really could serve as a stellar sci-fi soundtrack to alien animation. Well crafted sounds, and the clever craft continues in fabricating this medium. Sure, it is a flexi, but it has grooves on the see-through packaging, and the cardboard disk inside is just a decoy that you must take out to get the square outer record to spin round on the turntable. On the evil genius seismograph, that rates pretty soundly, glad we have the full length as hopefully this entices KFJC DJ’s to pour out more
Maas! The full length 3D is well worth a foray!
-Thurston Hunger 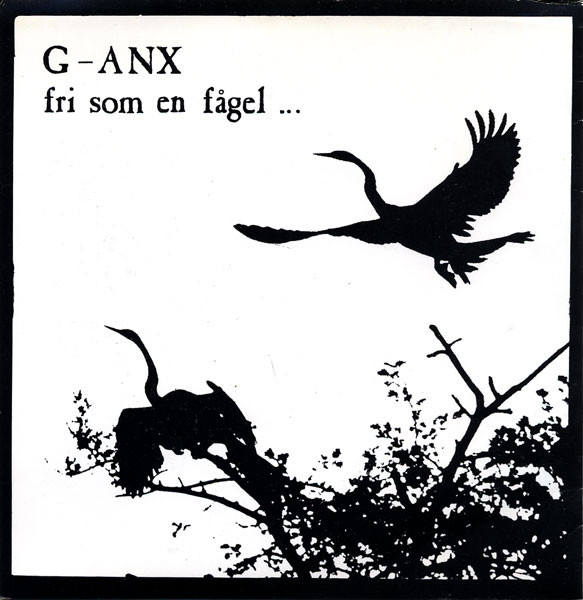 Swedish Hardcore punks negotiate ferocity, blast beats, the disenfranchisement of youth, and a spray of cynical humor with alacrity and aplomb.

Fri Som En Fågel… translates to “Free as a Bird” which is surely an allusion to the avian imagery that G-anx would employ in their cover art and the stark, slightly sinister, and dichotomistic aspects of this 7″ is part of what drew me in to this release. The ferocity, innovation, and humor is why I shall return.

G-Anx were a fucking great four-piece of long-hair punks with grindcore leanings from Jönköping and Huskvarna that packed it up in ’92. Raw and visceral, this is the real deal for this miserable volunteer.

Filthy Christians were a five-piece crossover project from Falun with a predilection for denim that also had a couple long-hairs in their group. Check out “Vaktmästar Jazz (Olle P)” (“Janitor Jazz [Olle P]” [B3]) for the album’s oddity which features  a couple of catchy jangly guitar interludes reminiscent of pop from the 60’s or the very short “Skate And Die” (B6), a nihilist ode to my preferred rolling toy of doom, destruction, and delight. Of special note is the track “Another Metal Band” (B5) which relates (via the thorough liner notes evocative of the era) a tale of a Hardcore band that rejects their roots to explore the often absurd Satanic fantasy realms of Death Metal… which is exactly what Filthy Christians would do not long after this release. What a bunch of fucking clowns… I love it! 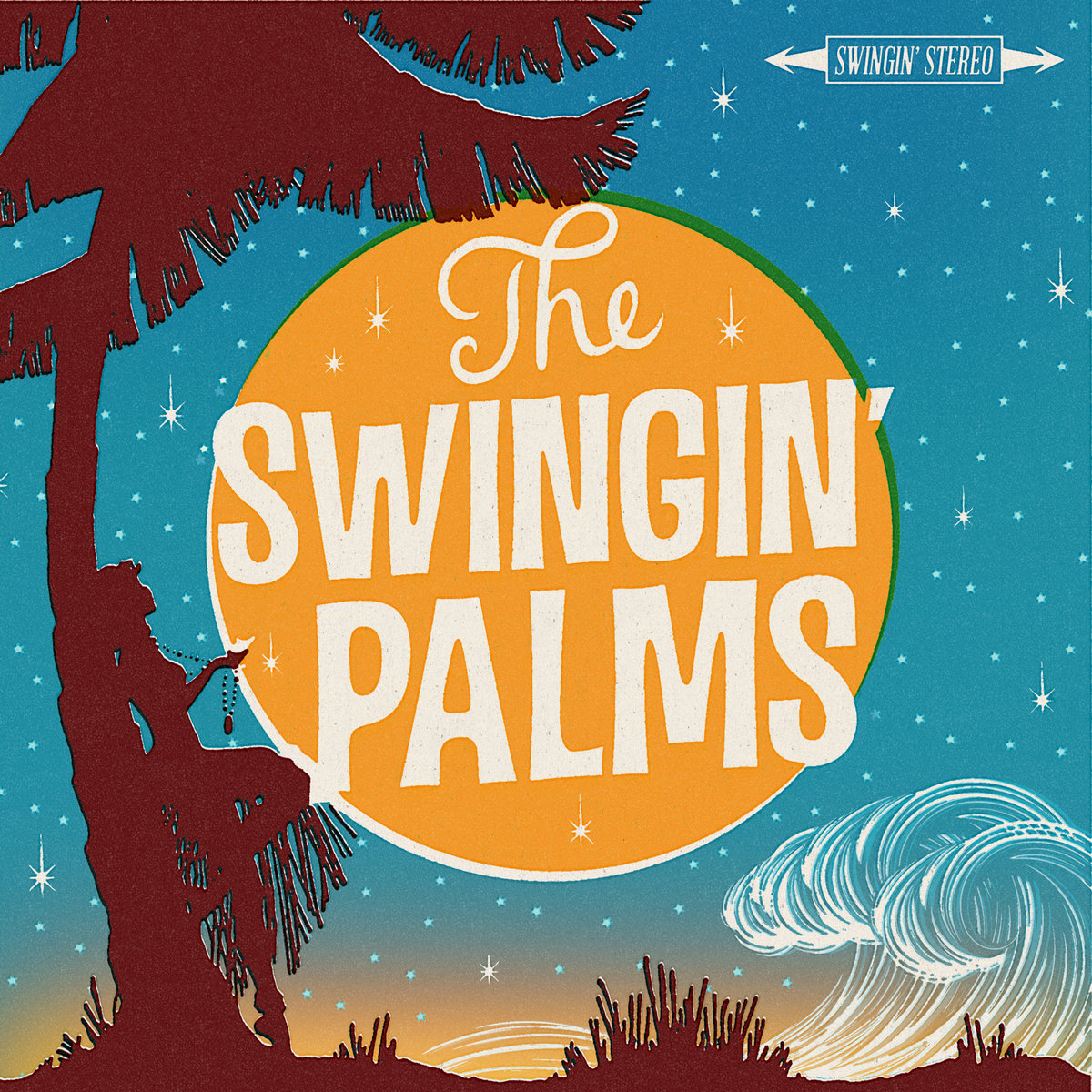 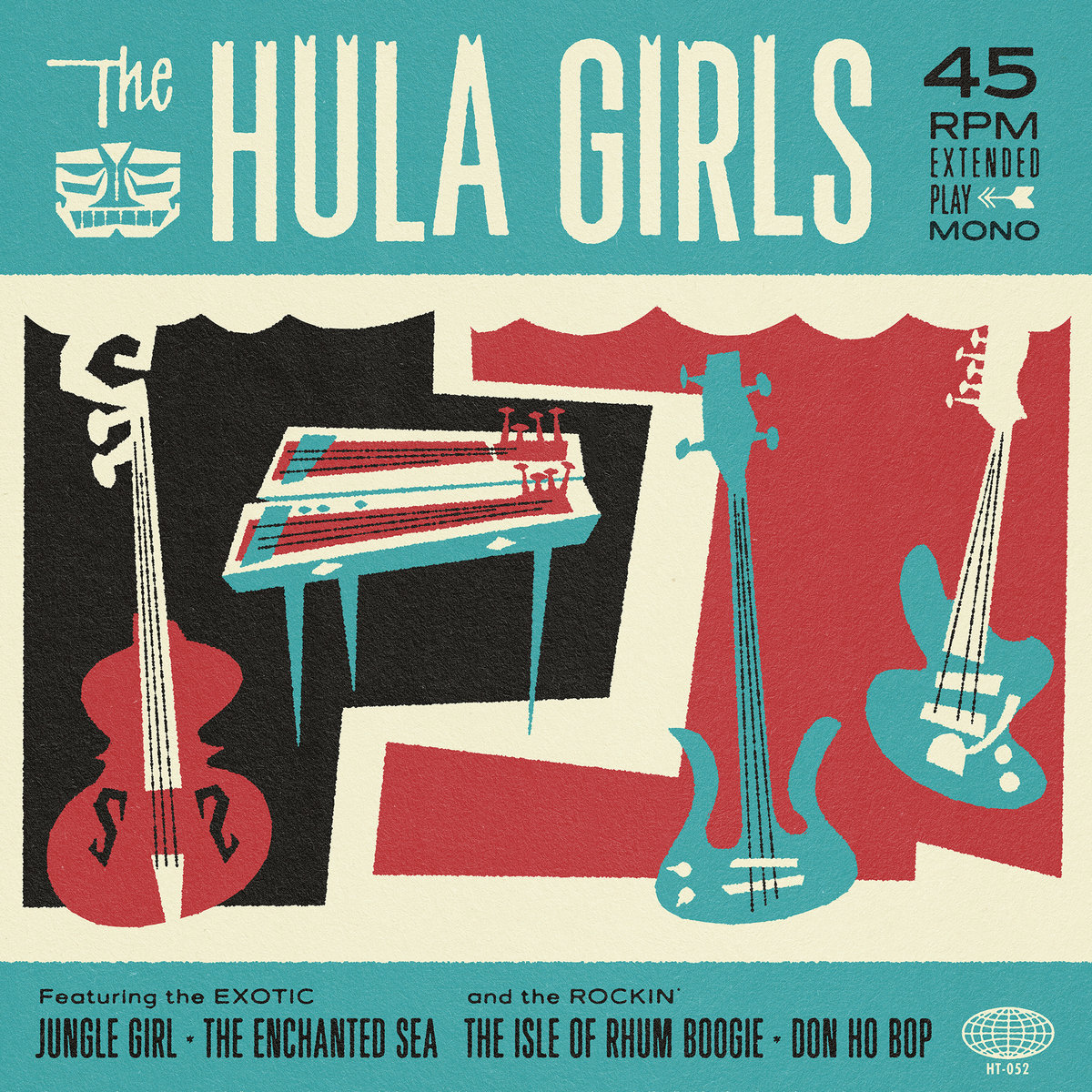 The Hula Girls have been busy preaching their self-described ‘hulabilly’ sounds all over Southern California. It’s the upright bass of Christian Kessler, the drumming of Doug Sanborn, the Gretsch guitar twanging of Spike Marble, and the steel guitar of Shorty Poole! They’ve played along side such modern rockabilly and surf legends as The Stray Cats’ Lee Rocker and Slim Jim Phantom, Dick Dale, The Ventures, Duane Eddie, The Knitters, Dave Alvin, Southern Culture on the Skids, Los Straitjackets and Hot Rod Lincoln. It’s up-tempo tiki and surf themed music, all filtered through the late 1950’s and early 60’s rockabilly and rock n’ roll sound. 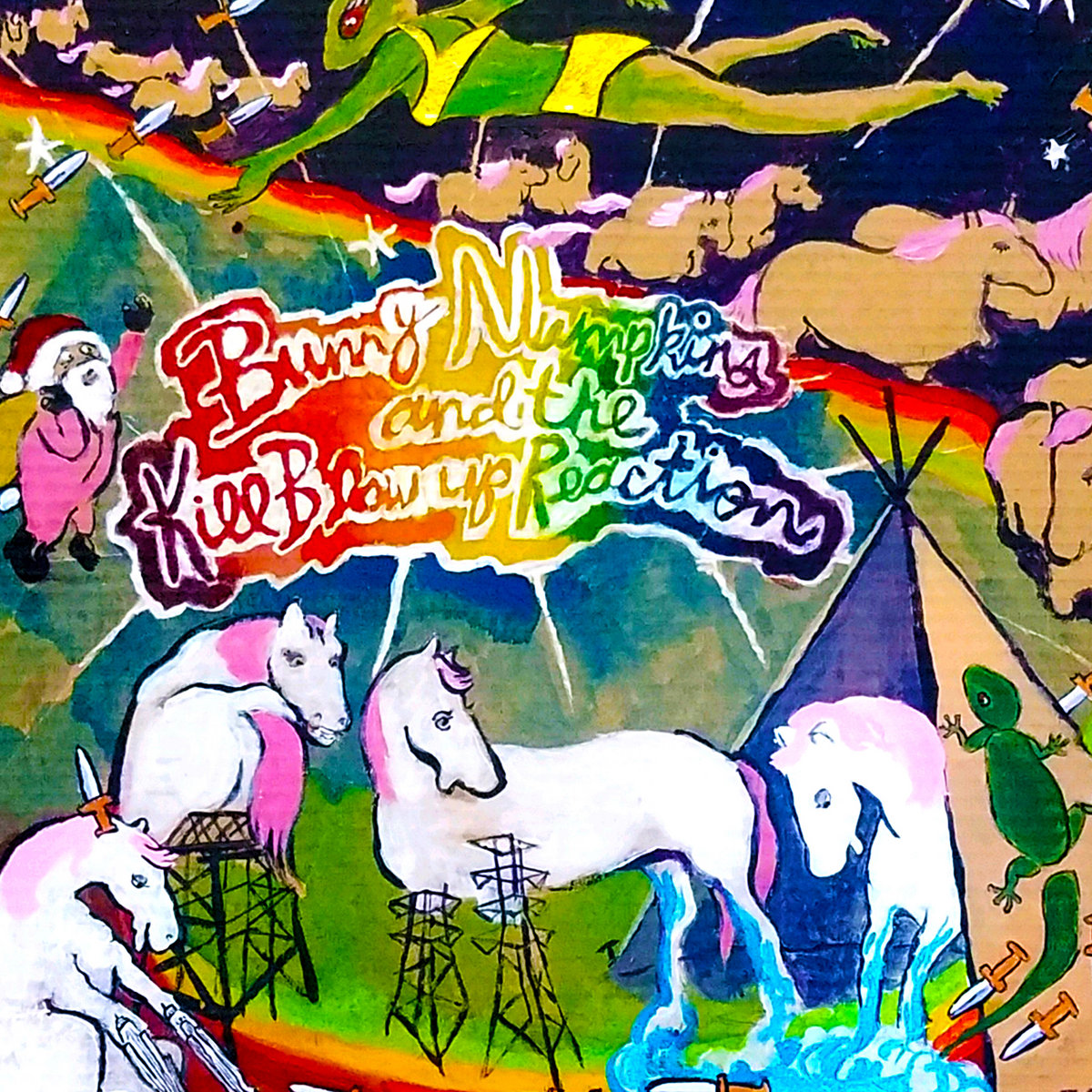 Bunny Numpkins & The Kill Blow-Up Reaction formed up around 2002. They started as the backing band for a puppet but eventually went on to simply make quirky pop. They are from Oakland CA and have played at the Bunny Jam, The Finch Gallery and clubs including Elbo Room, The Starry Plough and The Stork Club. Good clean fun for all. Good pop fun for all. 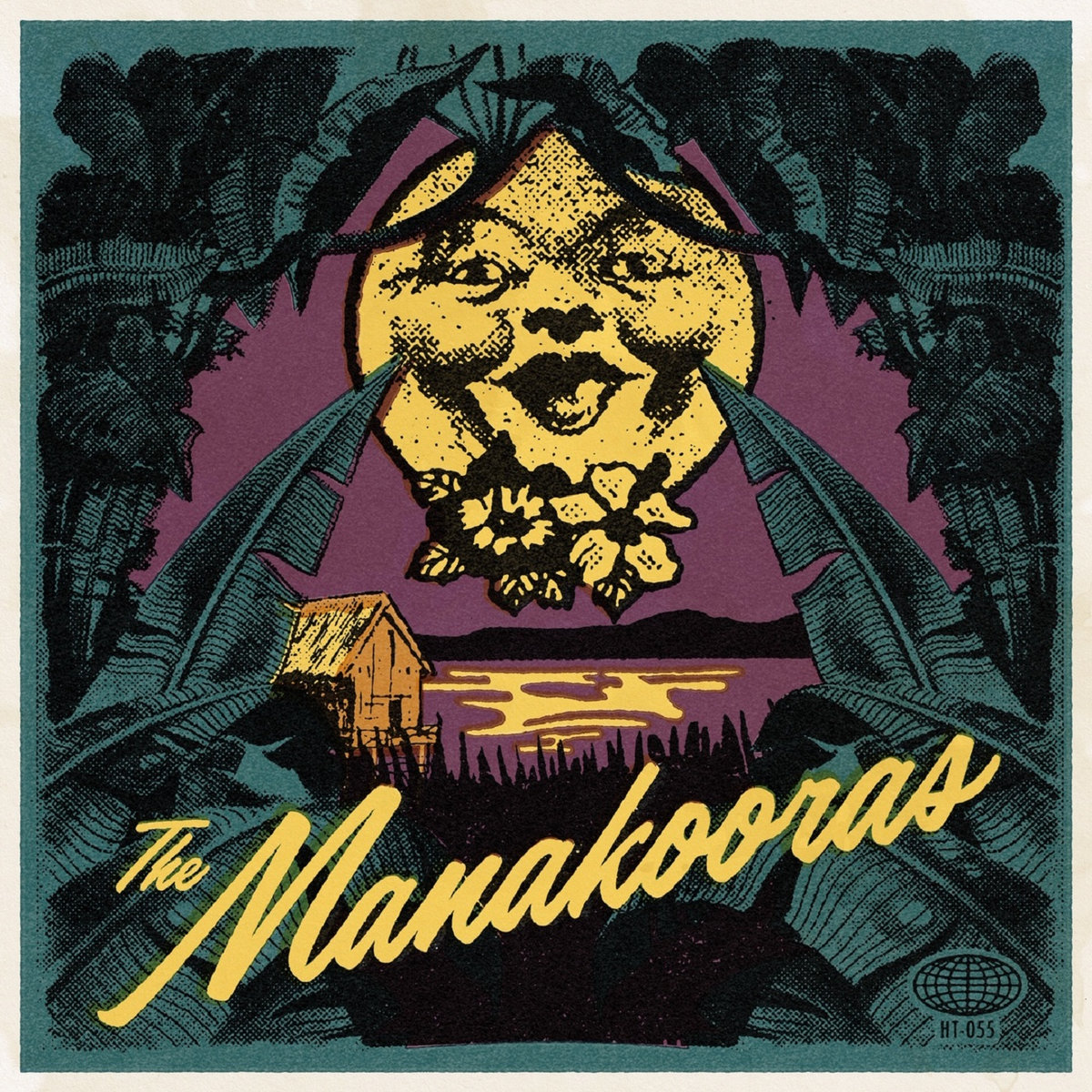 Exotica with a capital E from this North Carolina band. Three instrumental pieces that are gorgeous and tropical. Love, love, love the steel guitar. (Manakoora in Polynesian language loosely translates to witchcraft. Manakoora is a reef in Western Australia) 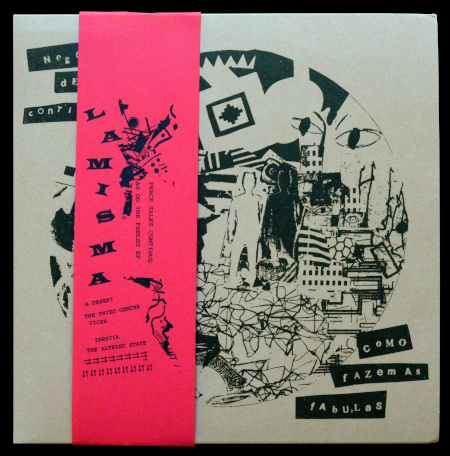 Up-tempo jangly guitars, over simple yet energetic rhythms, riffs and youthful, laryngeal vocals in Portuguese from this vibrant four-piece (perhaps three-piece, possibly defunct).
The title of this 7″ might be translated as “Peace Negotiations Continue Like Fables Do” and seems to be in line thematically with the other projects from Toxic State; the youth are dispossessed and they’re gonna rock the fuck out about it. 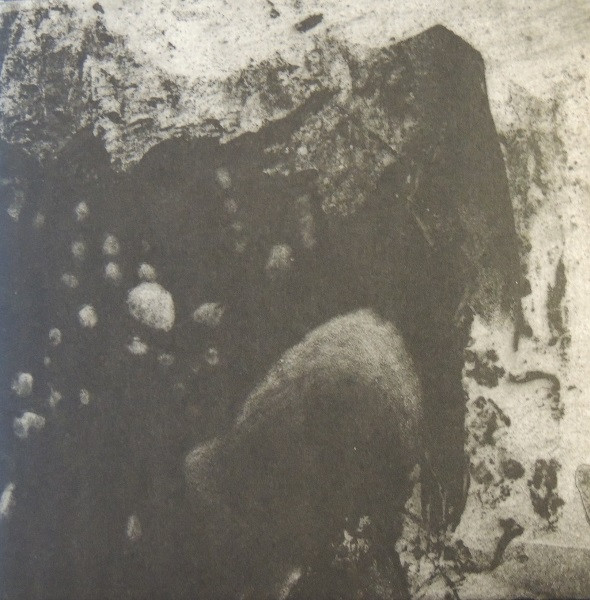 Witchrist of Auckland, NZ are, along with Diocletian, one of two bands that comprise a (sub)genre of Death Metal that they have deemed Doom Cult. Brutal, guttural, and low-end, Witchrist state that they are less musicians than practitioners of a “dark ritual” that is thematically centered around Hindu mythology, a theology that was part of the band’s upbringing. This is the murkier of the two sides, raw and without relent, sorrowful howling guitars add a haunting atmosphere to the sludge that rides just above the battering of double drumming and trash cymbal crashes. Occutorture (gtr) is also a member of active and excellent Death Metal project Distant Fear.

Antediluvian are a three-piece from Edmonton, Canada conceived of by Haasiophis (gtr/vx) and Mars Sekhmet (drms) in 2006. Guttural, brutal, and while very low-end employ more guitar slaying than the project on the reverse side of this 7″ (and the globe). Frenetic trem-picked runs soar and dive over a distinctive diaphragmal bellow. Haasiophis has an academic background and a profound interest in history, archaeology, and theology which informs the themes that inspire the un/holy direction of this project. Worthy of note is that Mars Sekhmet is also Nebel Torvum and that she has several compelling medieval/dungeon synth releases under this alias and Haasiophis is also known as Raphaim Specter in the project Black Death Cult, an active Black/Death/Doom project with interesting electronic accompaniment. 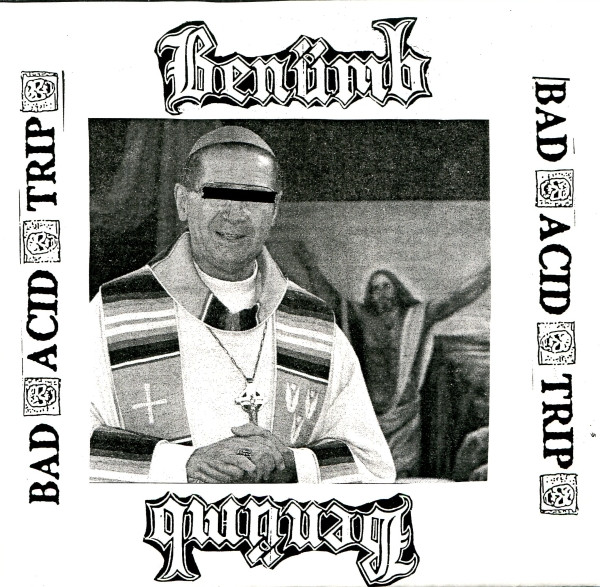 Nor Cal vs. So Cal Power Violence / Grind

Explosions in the key of neural meltdown.

Strangeness (Bass breakdowns). Spit (Back of the throat). Some hooks (Bait the hook, catch a listener). Samples (B.A. Baracus). Short (Be diligent). 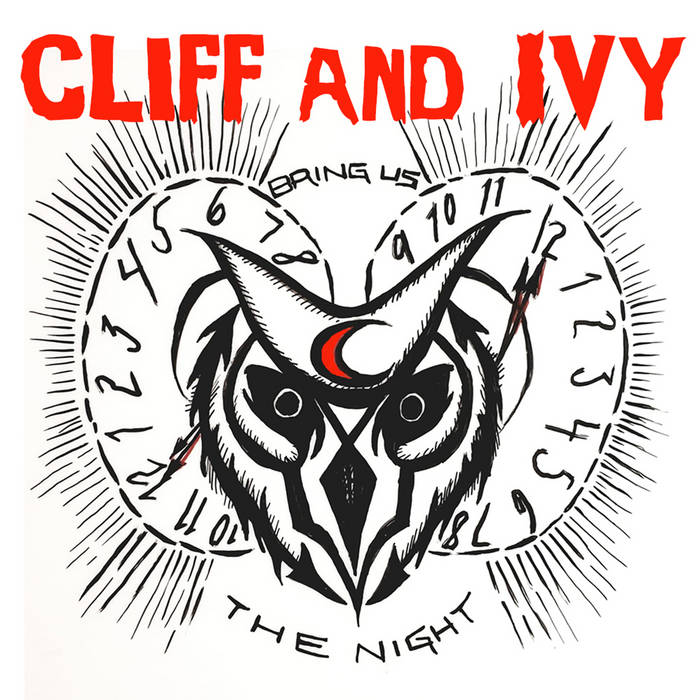 Cliff and Ivy – “Bring Us the Night” – [House of Extreme Darkness]

Cliff and Ivy are a goth duo from Anchorage, Alaska. This four-song EP was recorded in a fur storage closet. All tracks pelt you with guitar riffs as fast as St. Jimmy up the boulevard. ‘Bring us the Night’ is darker than Christmas in Fairbanks. Through wittier lyrics and interesting rhythm and chord choices, Cliff and Ivy chase the intensity that the Last Frontier radiates. This is a goth metal album you’ll want to turn again and again, you won’t be bored! I hope you’ll enjoy it as much as I have. 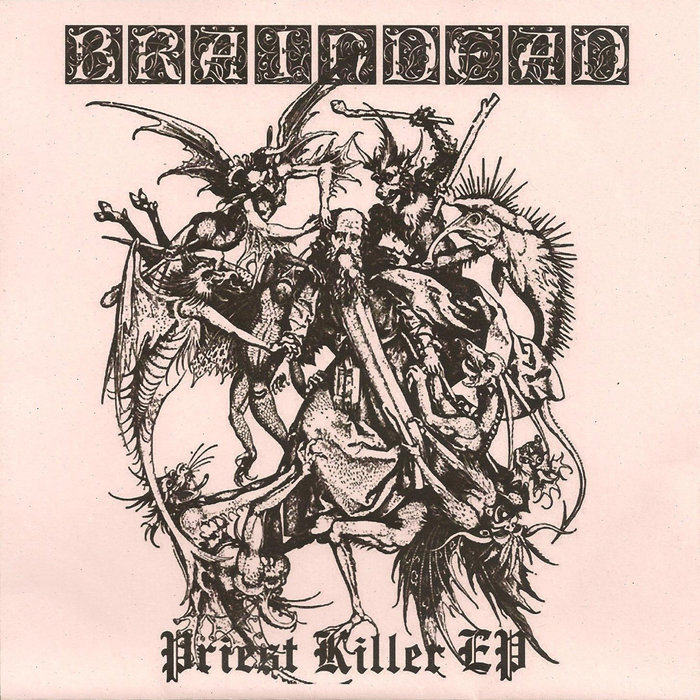 Suspended by his own viscera amidst flying buttresses and blood spattered idolatry , the priest has joined his father in heaven amidst staccato rhythms (less 4/4 and more pour gore), guttural bellows, primal screams, frenetic guitar, and samples that malign and denigrate the Christ.

Credited to One Rob Tyers of Moloch (UK), Perspex Flesh, Arson, and most recently Whipping Post. 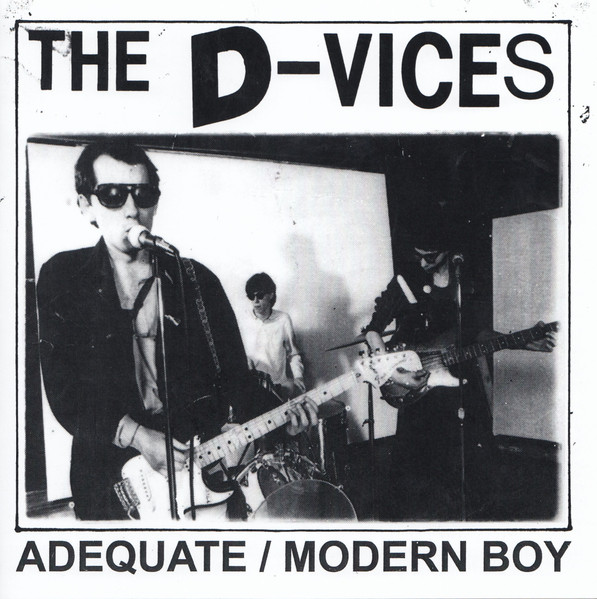 Bass bopping driving no wave from Montreal 1980, freshly reissued in 2022. Was stoked to see this in Cinderaura’s recent haul for KFJC, as by chance I had recently heard the American Devices “Gory Story.” (Gotta give props to Tremendo Garaje for that.) The D-Vices are an earlier incarnation still with an accent on Vivce, featuring Phil Nolin on vox/guitar. Nolin’s guitar brings a sort of Television-style search-and-slash-and-destroy. Nolin’s vox are full of piss and vinegar. These two short blasts really stand up over time, “Modern Boy” could get people Contorting on the dance floor. Nolin’s lyrics are delivered like body blows, at times his guitar and voice step back to let Rick Trembles bass and Guy LaPointe’s drums cruise for a few measures. Maybe live those measures would stretch out for minutes, it’s a pretty gritty groove. Trembles was the only Canuck to stick with the American Devices phase.
-Thurston Hunger 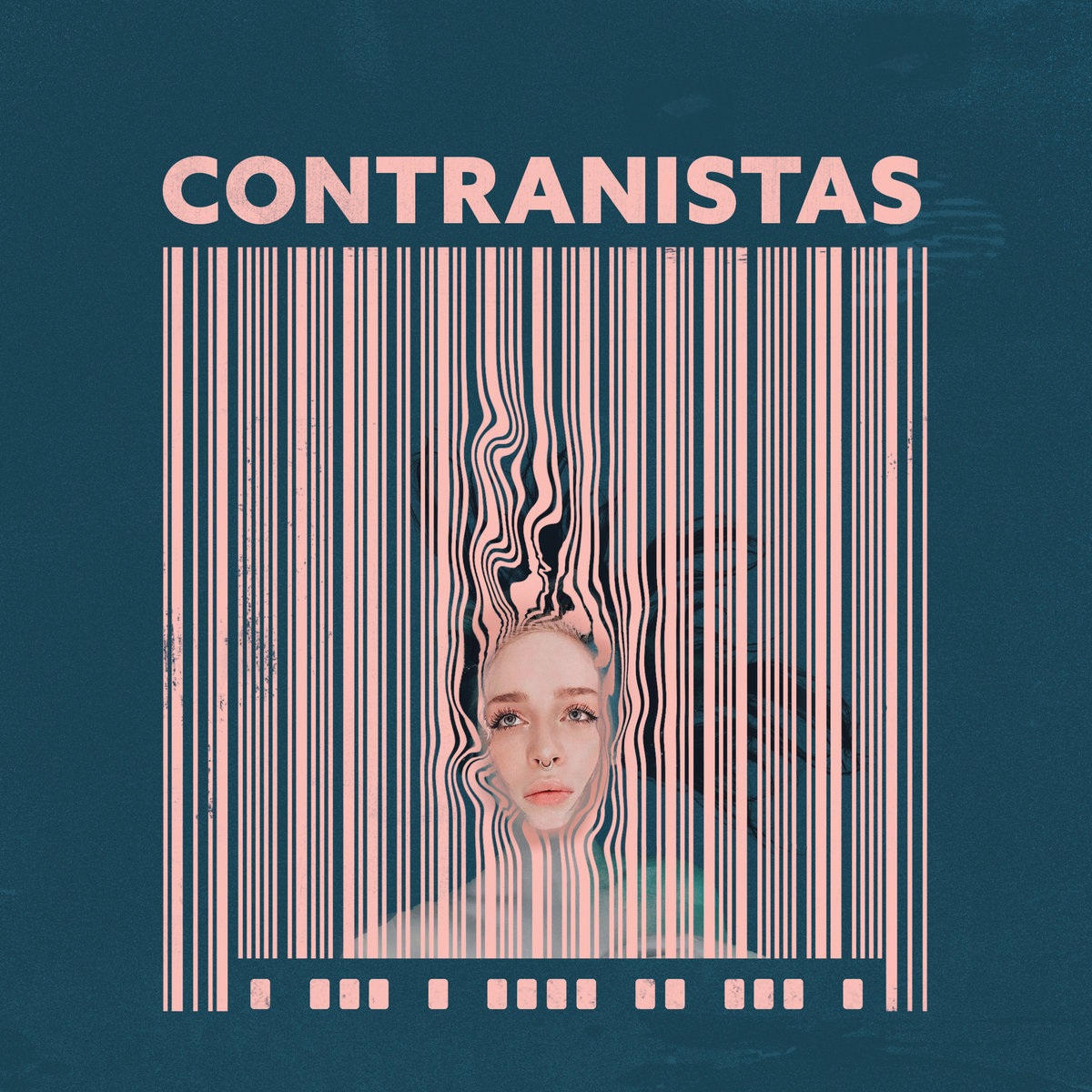 Although this Bakersfield duo has been called gloomy, I’d say their sound on this release matches the rather bright blue of the 7″ vinyl it’s etched into. “Center Negative” sounds rather positive to me, while “Memory Divided by Time” is bit more intense and you can hear more of the live looping sounds. The percussion, drums, and bass add to the atmosphere. You decide where it leads your mind. Personally, I like it both a lot. 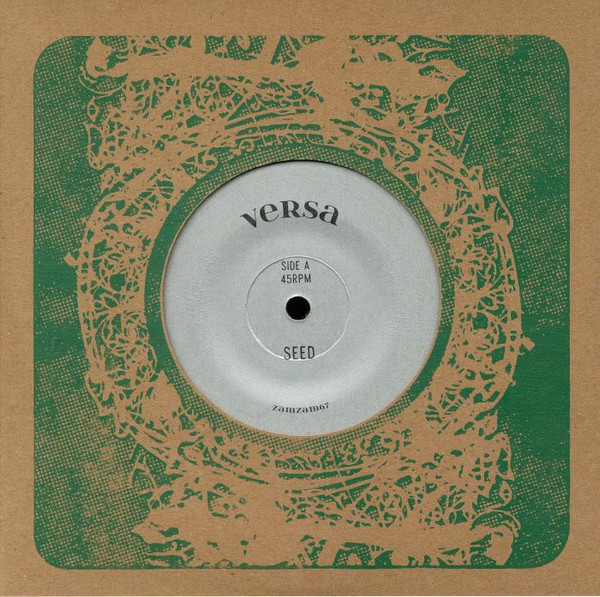 Another great release on Zam Zam. Instrumental spacy dub for top shelf enthusiasts. Side A- ‘Seed’ is a high-energy sativa-esque up-tempo 130 bpm four on the floor dub stepper, that dips and darts smoothly through time.

Side B- ‘Plant’ is an indica-induced dream-state meditation, running at half time of its counterpart. Plodding bass and hypnotizing melodica eerily gives a nod to Augustus Pablo, but this is music for this decade of dub, these times. Rough and gritty, raw and powerful. Photosynthesize your Dub. 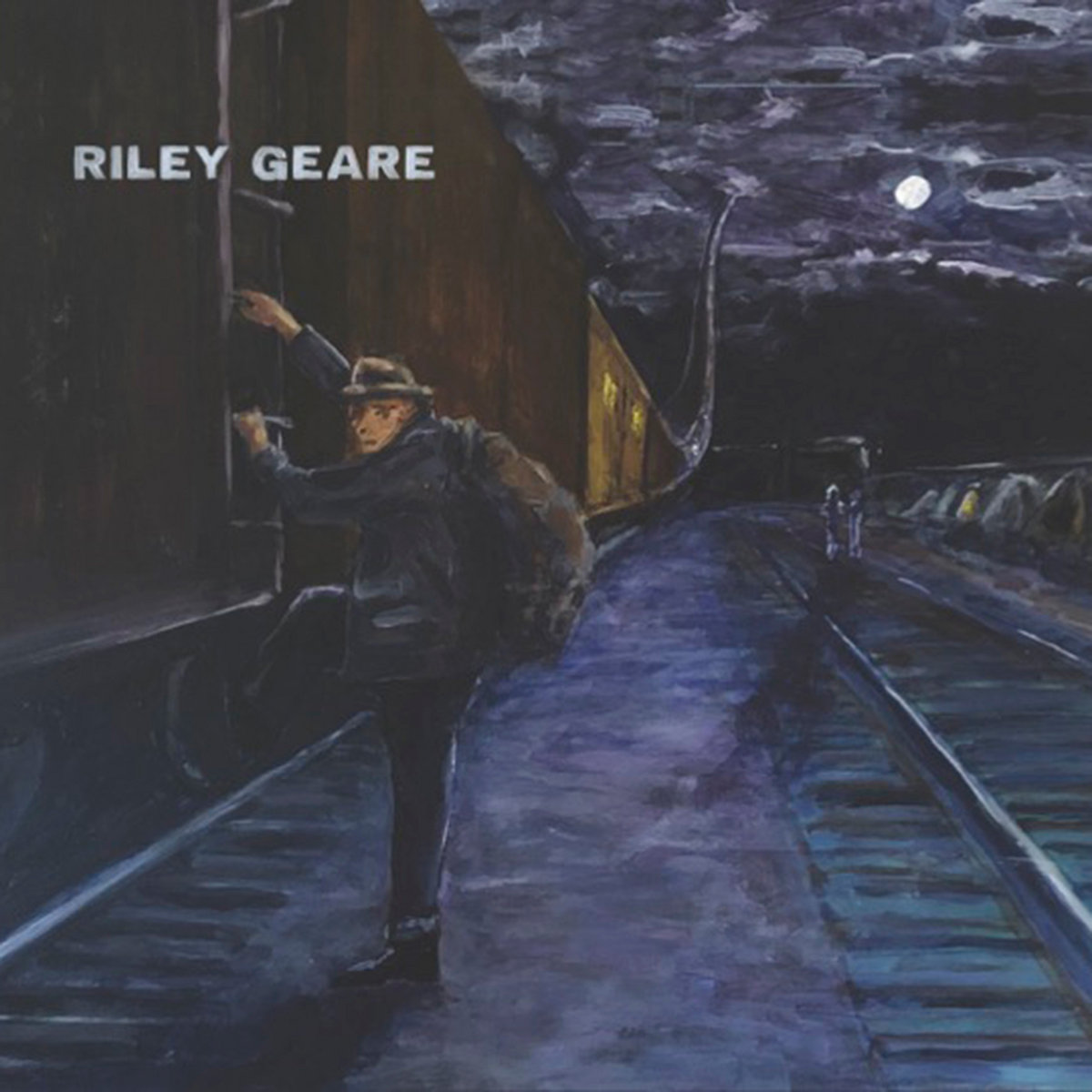 Riley Geare is a Los Angeles singer-songwriter, producer and multi-instrumentalist. This 7″ is a mix of chill wave and jazz-laden funk. Geare’s sound blends soft-jazz and mid-tempo electronica. Riley is jazzy with a little lean toward progressive rock. Shoegaze, dream pop, ambient and electronica could all apply. Very pleasant and a nice way to segue between genres. 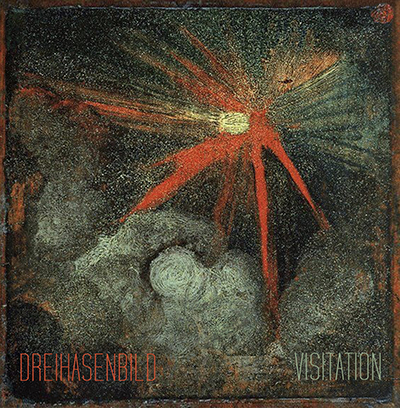 Endearing, whimsical, delicate recordings of violin, mood, charms, and found sounds. It’s introspective and pondering, definitely has a foreign film score vibe. A soft beauty of sounds, either in enhanced vibrance or wafting droned ambient clouds. A project of Stefan Keydel from Austin. 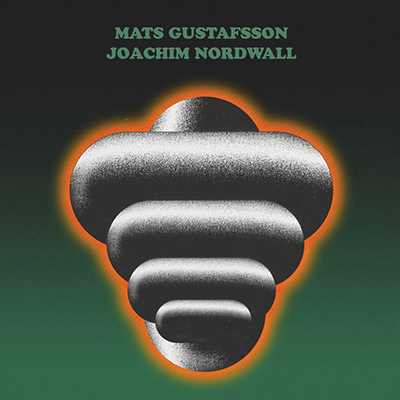 Both Gustafsson & Nordwall are Swedish fish. Mats is a free jazz saxophone guy, using the his breath in experimental ways with the horn, lots of breathy winds and spazz. Nordwall formed iDEAL recordings, and also goes by the alias The iDEALIST. He brings the lurky dark electronics that are the underbelly of a creepy sax. 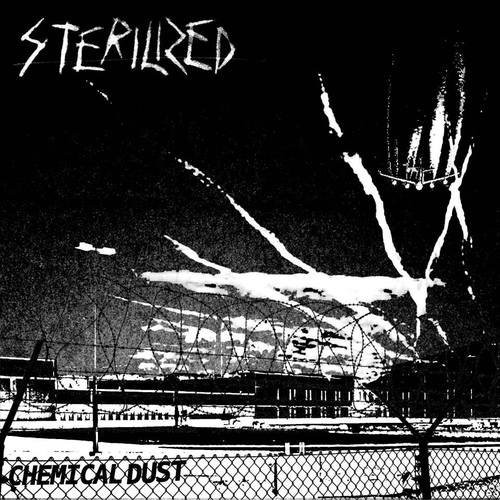 Indecipherable apocalyptic rage with the usual accompaniment; chugging guitars, wicked velocity, and a thunderous rhythm. Four piece enfant terribles. What more can be said? It’ll be good to be dead. 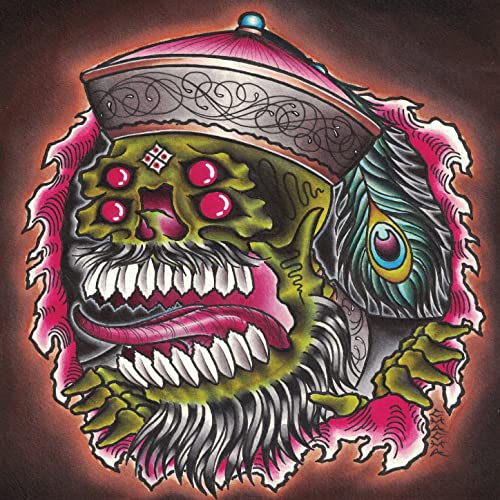 Wildly chaotic Hardcore from across all the oceans ca. 2018.

Struggle Session: Frenetic Hardcore Punk expats from Beijing. Heavily represented in our Library and prior to pandemic a guest in our pit. They’re members reside all over the world (China, Australia, Sweden) and they’re pissed. Not exactly touching my happiest place but they were nice enough gentlemen, we possess everything else in their catalog, and I defaced the sleeve before I became a little more picky about what we… addy add add. Though if I’m honest (often to a fault), the music is not at all what I find distasteful, It is more the cover that offends me, reminding me of former cohorts that once cast their shadows upon my life. So take my petty grievance with a grain of salt in the eye, opinions being what they are… for everyone!

Arryum:  South Korean, hyper frenetic HXC punk. Did not visit us or record much at all and appear now to be defunct. Maybe if I had added this 7″ when I received it they would be huge. World stadium tours and fawning groupies, incinerated hotel rooms, and myriad other examples of rock n’ roll excess. Sorry guys!

All lyrics are in English and watch out! 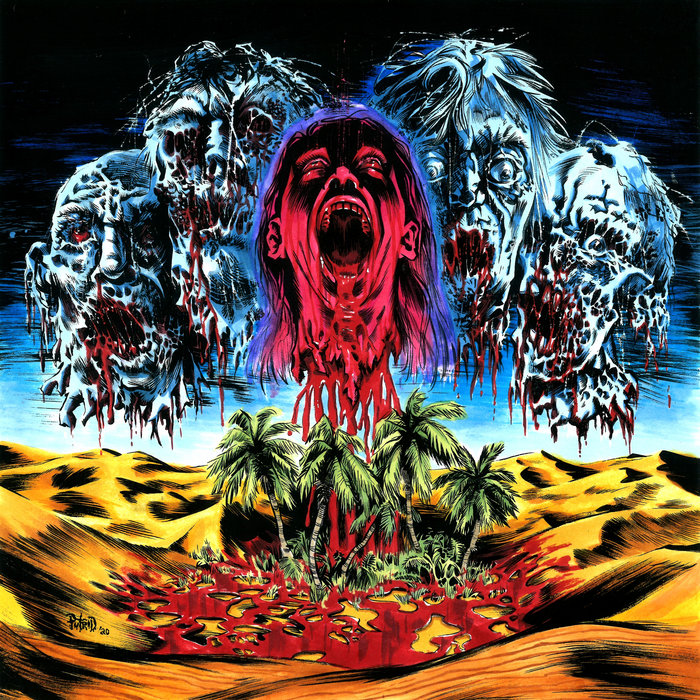 As the light of the moon glint across the black Santa Cruzian waves festooned with kelp hanging like the limbs of undead surfers as a dark hybrid of genres seeps like a cinematic fog into the vast KFJC library from just over the hill of lost souls on this split 7″ from Wave Guardian Records.

Cosmic Reef Temple offers a more frenetic instrumental with cascades of echoing guitars and thundering drums with a horn section that evoke a slightly Middle-Eastern sound, a haunted market in Cairo perhaps or maybe mummies on the prowl for teenage flesh soaked with palm oil and Blue Hawaiians. Delightful and macabre.

Courtesy of The Honey Bear