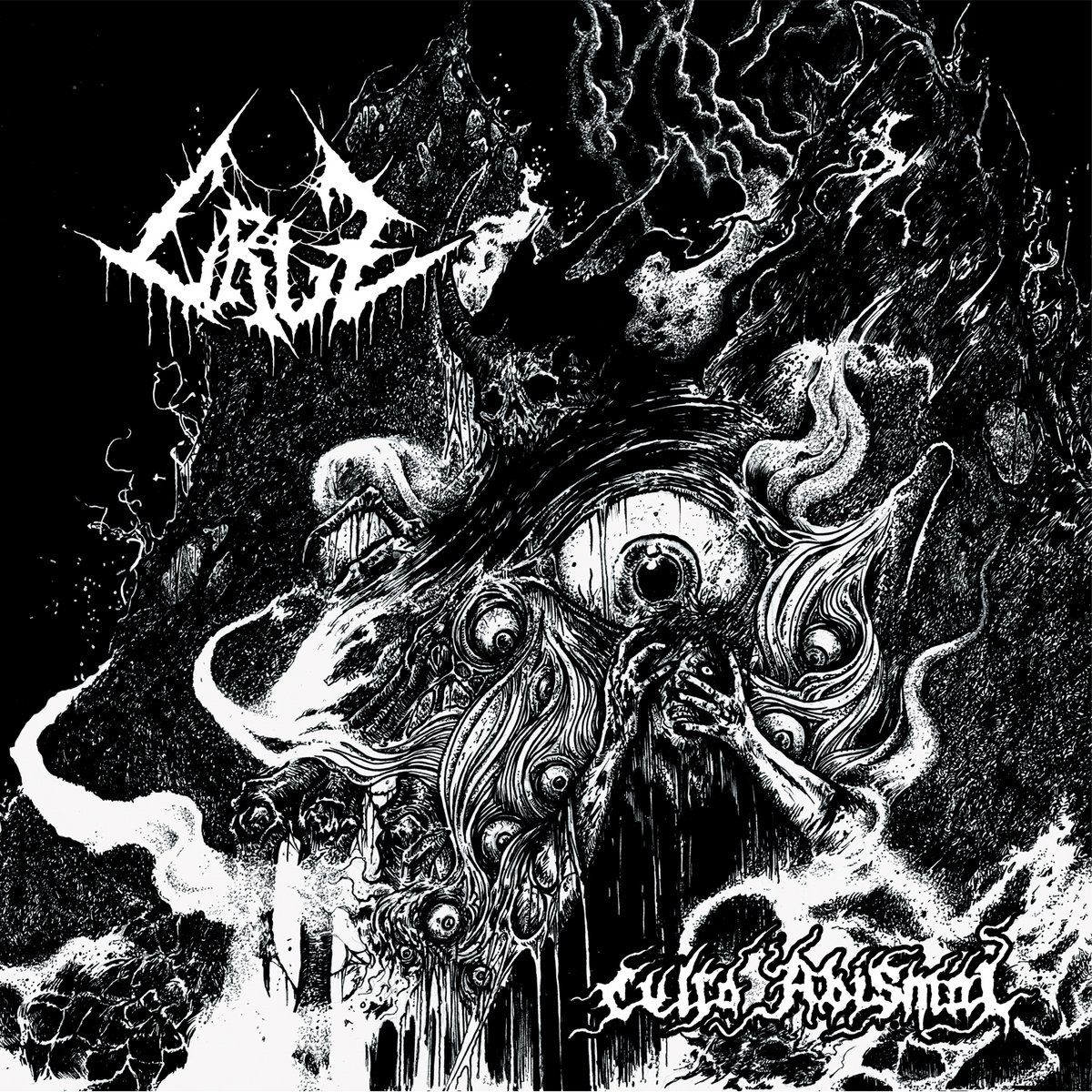 Culto Abismal is the perfect comfort food for an angst-driven, decrepit soul starving to fill the void: it is thrash handmade in the old-school style, kneaded, knuckled, and blackened, topped with a layer of death metal vocals and swirls of metal guitar leads and black metal melodies.

The lyrics, most written in Castilian (Spanish) by Xavi (drummer), are horror-themed and inspired by Lovecraftian concepts of malevolent entities, parallel dimensions, and, underlying it all, Xavi describes, “the insignificance of humankind in the universe, the extremely limited human understanding and perception of the whole of existence, the realities/forces/entities/etc. that exist outside our perception, and especially the scorn towards the ridiculous sense of vanity of humankind.” Two of the eight tracks, “Culto Abismal” and “Tumbas Ciclópeas,” are directly based on Lovecraft’s The Call of Cthulhu. “Pesanta” is named for the creature of Catalan legend that perches on people’s chests while they sleep, causing sleep paralysis, suffocation, and night terrors. The tracks “A Cops de Destral” [transl. “At the Stroke of an Axe”] and “La Pitjor de les Plagues” [transl. “The Worst of the Plagues”] are written by Javi (vocalist) in Catalan, the mother tongue of three of the five band members.

The cosmic terror within is depicted in the savage artwork of Cesar Valladares, renowned for his dark illustrations for numerous metal album covers. Even if you’re not a fan of vinyl, having the details of Valladares’ nightmare vision displayed on the 12-inch canvas is worthwhile.

Cruz’s Culto Abismal is a frenzied feast to be devoured! 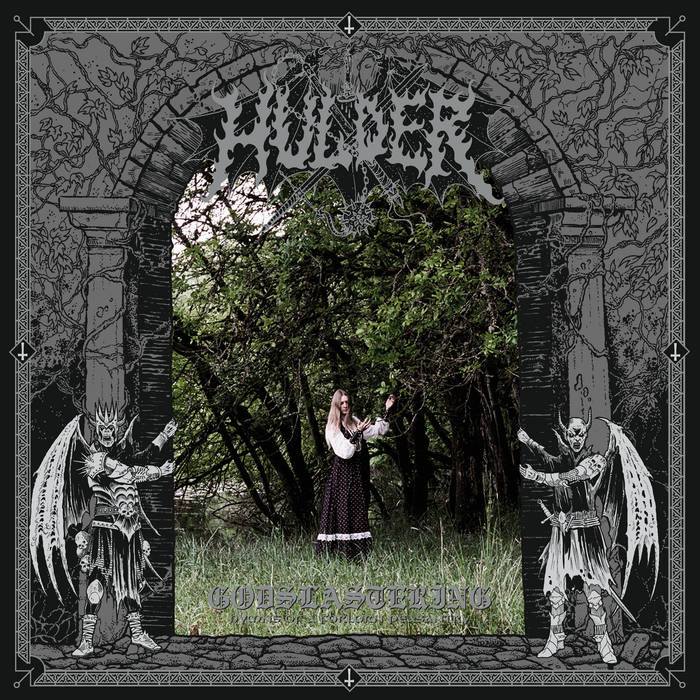 “Godslastering” can be translated from Dutch as “blasphemy.” The blasphemy of this album is that Hulder dedicates her hymns not to God but to the common people——those who toil fruitlessly in the frozen ground, who are subjugated and forced into labor and war, who die of famine and disease, who contend with pain, isolation, and desperation. What better way to express this narrative of misery than through the music of black metal.

Self-described as dark medieval black metal, Hulder is the creation of multi-instrumentalist Marliese “Marz” Beeuwsaert. Since inception in 2018, Hulder has released a number of demos, singles, and EPs; Godslastering: Hymns of a Forlorn Peasantry is the first LP (released in 2021). On this album she performs the vocals, guitars, bass, and keyboards. (Necreon was the session drummer.)

Hulder presents us with music that is at once furious and melodic, melding black metal with folk in unique ways, both subtly and not so subtly. This is reflected not just in her musicianship but also in her vocal style. She has strong, low, black metal vocals that rage but aren’t so distorted that the lyrics are undiscernible. She can also sing gently in soprano and is likely the source of the choral singing in the background of a few tracks. Hulder incorporates folk elements that add to the dark ambiance rather than detract from it——there are only patches of light, quickly overtaken by gloom, frigidness, blustering gales, and sudden downpours.

The two tracks that I’m most drawn to, I have come to realize, represent two extremes of the album: “De Dijle”and “Lowland Famine.”

“De Dijle” (Track 4) is named after the river Dyle, which runs through Hulder’s hometown in the Flanders region of Belgium. It begins with the sounds of the river’s flow and the melody of an acoustic guitar, but this initial tranquility is gradually submerged. This song is plagued with an eerie, gentle, looming darkness. Hulder reigns in her terror-rage black metal vocals to a raspy, echoing whisper to spin tales of the river, all in Dutch. The acoustic guitars and keyboards are in the forefront, with electric guitar entering later and only in the background to add to the song’s unfolding intensity.

“Lowland Famine” (Track 6) attacks immediately, with fast drums and melodic guitars and keyboards. Hulder’s vocals are an onslaught of harsh retribution. The guitar and the keyboard each get their spotlight, but the guitar gets more lead time in this song compared with the others. This song thrashes melodic black metal, drops down to a slow, marching anthem marked by double kick drum, roams the landscape, and ends solitarily with the guitar.

The two extremes are both represented in “A Forlorn Peasant’s Hymn” (Track 7). The first three verses are in Dutch, sung with soft, breathy, high-pitched vocals, and nestled in melodic electroacoustic guitar and synth. This folk ballad style strikingly breaks into fast, full-boar metal midway, and Hulder’s vocals turn to heavy savagery, sung in English. The ending is revved up and abrupt. This song is a culmination of Hulder’s range of styles and creativity and is appropriately the title track in essence.

Folk elements are also present in “Sown in Barren Soil” (Track 3) and “From Whence an Ancient Evil Once Reigned” (Track 8). These elements include acoustic guitar and bass, subtle choral vocals, flute (synthesized?), and ambient sounds of nature.

The black metal within which all of this is grounded——the brutal vocals, pummeling drums, straightforward riffs, and melodic keyboard and guitar leads——is solid. Between and within songs, the tempo and rhythm shift. The tracks more firmly rooted in classic black metal are “Upon Frigid Winds” (Track 1), “Creature of Demonic Majesty” (Track 2), and “Purgations of Bodily Corruptions” (Track 5).

Hulder harbors her heritage in her music; she brings with her an appreciation for the culture, daily ritual, and natural surroundings of the rural farm country she grew up in. This album’s lyrics portray a mythical realm, but instilled is a respect for generations past, an acknowledgement of their struggles, and a consciousness of humanity’s deep roots. Despite the medieval imagery, the lyrics transcend myth and time, reflecting the plight of humankind in perpetuity. The hardship and hunger and death represented particularly contrast against the overabundance and indulgence of the US, which Hulder herself has called witness to, having moved to the US over ten years ago and now being based in the Pacific Northwest. As a piece of Hulder’s journey to further her consciousness of self, this album also furthers humanity’s consciousness of itself and its environment. Did we truly leave the Dark Ages behind?

To Hulder I say, Gezondheid! 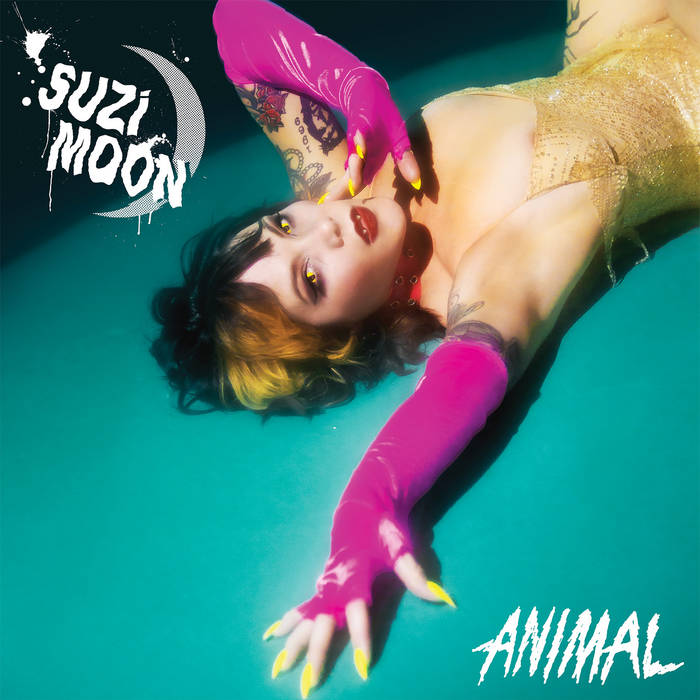 The Los Angeles punk scene has been Suzi Moon’s creative playground for some twenty years, and this album reflects that. Suzi Moon’s Animal is straight-up L.A. punk rock, with the sheen of cover up, the smell of perfume, and the glitz of sequined leopard print. It is familiar and catchy, high-energy rock ‘n’ roll.

Suzi Moon, aka Suzi Homewrecker, who relocated to Washington D.C., has played in the all-girl punk bands Civet (guitar, vocals) and L.A. Machina (bass) and fronted the power trio Turbulent Hearts (vocals, guitar). When the pandemic hit, she decided to funnel her energy into a solo project. Animal is the second of two EPs, followed by a more recent full LP, she has since released as Suzi Moon (released by Pirates Press Records in April 2022).

On this album Suzi Moon sings and plays guitar, with Drew Champion on lead guitar, Patti Bo on bass, and Sean Peterson on drums. Each of the three tracks has a different feel, and Suzi Moon adjusts her vocal style to the material. The first two tracks (“Sonic Attraction” and “Animal”) have variation and drive, with rockin’ guitar riffs flavored with feedback and melodic leads contrasted against low-end floor tom action and bass. The vocals are infused with sultriness and edged with a subtle Joan Jett gruffness. The title track, “Animal,” showcases Suzi Moon’s ferocity, playfulness, and versatility. It is perhaps the least commercial sounding of the songs and also the only one with FCCs. “Gold Record Autograph” is straightforward pop punk with clean, sugar-coated vocals and harmonized backup vocals.

Personally, I’d like to hear more of that rawness that Suzi Moon unleashes live on stage, but she tends toward the controlled, well-produced, warm, power-pop sound. This neon yellow 12” EP provides a decent picture of the band’s fluorescence and potential. 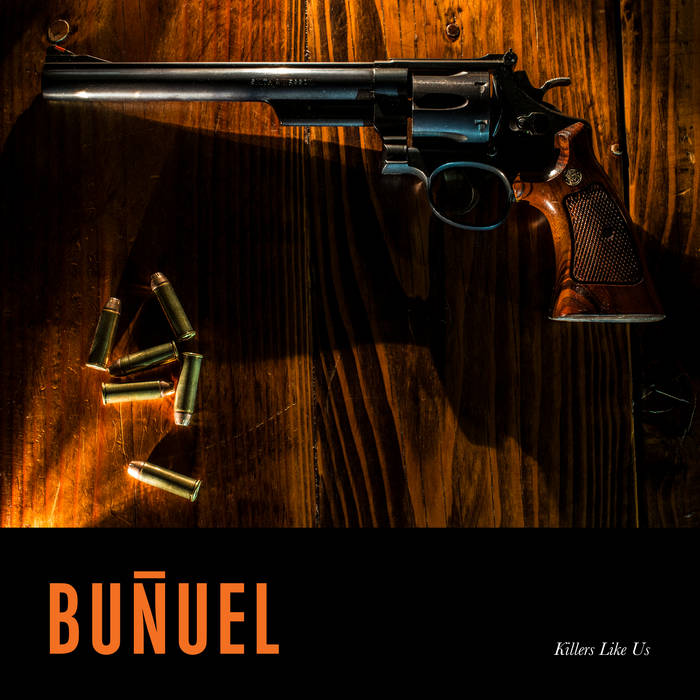 This one’s a bruiser. You can see it coming at you in slow motion, but you hesitate anyway, stunned—and then you receive the energy of the impact. You feel the thudding in your head and hear an intermittent buzzing. The swelling begins, pounding and growing, turning an angry red. The red eventually cools to blue and yellowish green. A dull ache remains. You’re left feeling disconcerted, wondering, “What happens that a good man turns bad?”

The bass—a menacing, throbbing, dirty beast—is so heavy that it creates a strong gravitational force that the other elements might frantically struggle to escape but are always drawn back to. Bass notes are drawn out and fuzzy but can unexpectedly transform into melodic riffs. The guitar is manifested as fluttery buzzing and distorted scratchy noodling but also develops into melodic, driving riffs on the fast tracks and always with feedback and effects. There aren’t any standard guitar solos—well, maybe one. The drums are versatile: from slow, minimal beats to driving punk rock beats and even some funky beats. They’re heavy on the kick and the snare at times; the fills aren’t over-the-top but creative and nicely placed. Sometimes percussive sounds like tinkling and crumpling are added or simply replace the drums. The lyrics are mostly spoken-yelled, sometimes obstinately dragged out, sometimes half sung in an emotionally drunk tone, sometimes steeped in reverb and effects. The vocals range from despondent speaking to fantastic, guitar-matched screeching and many variations of vocal sound in between. The additional female vocals (Track 4) are melodic and haunting but forceful—an interesting opposition to the raw sound. The lyrics are composed of poetic vignettes, stark imagery, and existential meanderings (see liner notes; FCCs on Tracks 2, 6, 7). Although not mentioned in the liner notes, sounds of synth and possibly field recordings are interjected.