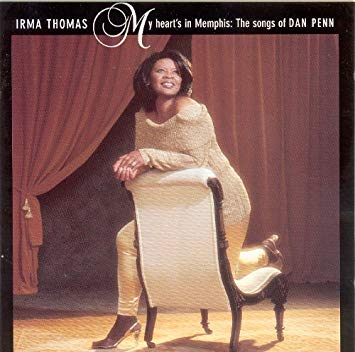 Thomas, Irma – “My Heart’s In Memphis: The Songs of Dan Penn” – [Rounder Records]

Irma Thomas, a Grammy-Award winning contemporary of Aretha Franklin and Etta James who never experienced their level of commercial success, teamed up with Dan Penn, one of the great Southern soul songwriters for this album. And so, I was excited to listen to it. Unfortunately, although her vocals are certainly great, Thomas just doesn’t seem to connect to many of the songs on this album. I felt like I had walked into the lobby bar of a really nice hotel and was listening to the house band and singer. There’s a laid-back modern soul feel that gets too relaxed at times and not fiery often enough. My favorite track is #4, “If You Want It, Come and Get It”, although many others are solid. Overall good, just not as big or great in this effort from 2000 as her prior and later work.