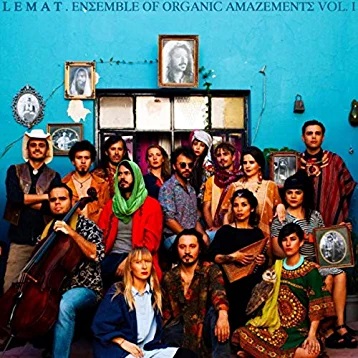 LEMAT is a loose collection of artists wandering around the world as the whim strikes.  As they traipsed through Mexico, Germany and the US, they recorded the tracks found on this album.  Originally released as two EPs, both releases are collected on this CD.

15 artists are listed as contributing to the project, but the core seems to be drums, one or two guitars, and “vocals”, with other instruments contributing on an occasional basis on certain tracks.  Described as a “multi-ensemble project of psychedelic rock, freak folk and experimental music”, LEMAT tries to be several things at various times.

Swirly poppy chords with a torrent of various vowels at various pitches would be the best description I could come up with.