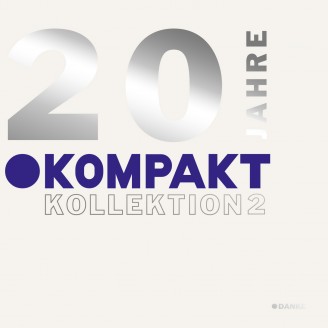 For twenty years Kompakt has been an influential driving force in the German minimal house and techno scenes. The label run by Wolfgang Voigt, Michael Mayer and Jurgen Paape decided to put out two double-disc compilations that champion some of their most respected releases over the last two decades. “20 Jahre Kompakt: Kollektion 2” marks the second installment of the celebratory release and it’s clear why Kompakt decided it was necessary to split this release over four discs; “Kollektion 2” comes across as much more toned down that its predecessor by taking the focus away from the dance floor and closer to the at-home listener.

Dance music at its heart is about going through crests and troughs of hedonism and redemption. In this dichotomy, “20 Jahre Kompakt: Kollektion 2” is easily the redemption side of the “20 Jahre Kompakt” series. Each disc balances between minimal trance and house with traces of acoustic elements outlining the backgrounds of its melodies. Kompakt is best known for seamlessly blending textures of pop, house, trance, disco, and techno with a certain amount of finesse that allows each genre to come out equally pronounced over the label’s distinct minimal style.

Disc one is a certain testament to that- from start to finish the track selection and arrangement are done such that the compilation becomes more than just a list of greatest hits: it’s a journey into the heart of one of electronic music’s finest labels. From the outset of Closer Musik’s “Maria” each track is thoughtful and beautiful but isolating with that essential redemptive quality that is the vision of Kompakt. “Grand Cru” turns the compilation toward a dark, pensive direction. The slow drive of its marching beat hypnotizes the listener until a dark duet starts between two characters that slowly fades out across the beat in a soulful reverberation. By the end of the first disc the label sweetly bathes the listener with the uplifting and tender, even loving melody of “So Weit Wie Noch Nie” waking them up from their beat induced hypnosis.

Disc two is the more beat-driven of the two discs, but unfortunately also much weaker. The vision of the tracklist doesn’t seem as focused. In focusing more on techno and italo-disco, the second disc comes across as monotone and uninteresting. It starts off strong with the Michael Mayer’s mix of “Yes Sir, I Can Hardcore,” but becomes progressively less enticing. The middle of this disc takes a serious dip, picking up briefly with “Irre” and “Lorely” but then quickly dropping back off without coming back. Track by track this release does have more good songs than bad, but it suffers from poor arrangement. Since the pieces don’t work together the whole, unfortunately, suffers.

For twenty years Kompakt has stuck to its guns and pushed forward with the same vision. Kompakt represents a certain idiosyncratic style of class, finesse, and maturity which has become a cornerstone of the German electronic music image. Dance music goes in and out of fads like no other kind of music, but it’s the tastemakers who stick to their guns who stick around. Kompakt has maintained its legendary standing without rising too far to the surface of popular dance culture though remaining an influential force behind it. “20 Jahre Kompakt: Kollektion 2,” is an excellent representation of the label, despite having a serious flaw on the arrangement of the second disc. Dance music aficionados and casual listeners alike will have a hard time not being drawn into this intoxicating compilation spanning twenty years of dance music history. 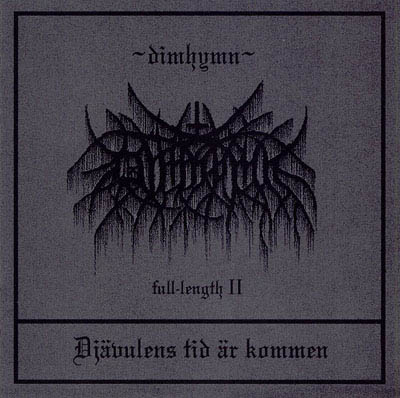 Dimhymn was the two part Swedish project between Alex(aka Nordsjal) and Jonas Bergqvist, better known as Nattdal or ‘B’. This was the first project of both members until they stopped making music in 2006 when Nattdal moved on to IXXI. Nattdal was a prominent member of the Black Metal scene until his untimely death from a prescription drug overdose in 2011. From 2004-2011 he released and impressive 14 recordings under four other projects not including his solo project. “Djavulens Tid ar Kommen,” or, “Devil’s Time has Come,” was the produced??on the now defunct Insikt in 2005 but wax-released on Turannum Records and marks the second release of Dimhymn. Nattdal and Alex show a remarkable amount musical and production skill on this release. Lyrically, Nattdal’s style is ritualistic. Rather than being a standard expose of hatred or suffering, his lyrics could be considered instructions. Expressing feelings of extreme misanthropy, Nattdal demands us to mutilate ourselves either to die or let the poison of Satan consume us. Having presumably already given himself to dark-one, what doesn’t come off as ritualistic instructions comes across as a prayer. The slow, crawling rhythm of “Ceremony of the Devil” and the growling, even snarling vocals set an atmosphere that makes the listener feel like he is being summoned to join an unholy cult to become a conduit for evil, to crush the skulls of infants and watch the darkest times revealed before their eyes. Nattdal tells of the hatred that Satan to fuels him and how it will help him kill everyone he sees and how he will rejoice when armageddon sweeps everyone away. As a duo Nattdal and Alex assault the listener with a torrent of violence and destruction- there is no room for sadness, anxiety, or depression only an all-consuming hatred for existence. The release is not entirely atonal however, despite being mostly fast-driven there are still noticeable crests and throughs making listening to the record intresesting experience. It’s hard to believe this was only the group’s second release because the sound is incredibly refined and mature. An especially good example of this polished style is “Act(666)” where the vocals go in and out of being the leading aspect of the tracks and being an atmospheric backdrop to the wall of guitar until the track eventually fades into a radio pick-up then slowly into static and then- screaming. Lord Gravestench once said to me after watching “Witchfinder General,” that anything that ends with inconsolable screaming is good in his book. Amen.

‘Slow Walkers’ is a concept album about the inevitable zombie takeover created by Liz Harris (Grouper) and Lawrence English (label head of Room40). The release has a loose track list, included in the vinyl release is a slip of paper indicating that there are different parts to the record but without track times available anywhere separation is near impossible. Progression through the various sections is slow and methodical, because the sections track together locating a point where one section starts and another one begins is a losing game. Side A features dark wavering ambient tones and a muffled thunder which crawls in and out of the track. A faint low whistling isolates the listener from their environment and into the twisted world of the slow walkers. There is no happiness or redemption, only darkness which slowly consumes the listener over the course of the album. Side B uses slightly higher pitched tones with muffled strings adding a thick texture to the release that makes hypnotic. Escape is impossible- out of the fire and into the rotting maw of the zombies. 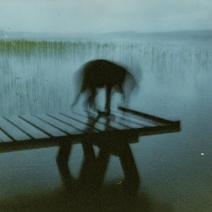 Samuli Tanner and Tommi Lanka better known by their moniker, Clouds (not to be confused with Scottish duo of the same name), are an electronic music project hailing from Finland. This release came out on RAMP (Records Are My Pillow) Records which in the past has hailed releases from artists such as Zomby, Actress, SBTRKT, and FatyDL (at one point even amalgamating them into a collection for the label’s 50th release) so it’s fair to set expectations high on this “mini-album” as it’s frustratingly categorized.

USB Islands adds to Clouds’ growing catalog of unique bass music which refuses to pigeon-hole itself into any one genre. The release has a clear aesthetic which is elegantly accomplished while paradoxically keeping a loose hold on the production style. Clouds maintains a dark and contemplative vibe with tracks like, ‘You Go to my Head,’ and ‘Four Hands,’ which follow in the style of traditional IDM, dub-step, and garage then move into more experiential club-friendly territory with the Jersey club style, ‘I’ll Be Broke’. The album’s steady focus keeps the genre-melding in line making it a solid release from start to finish.

The remixes on this release deserve mentioning as well. Each remix artist was able to create a distinctly different track compared to it’s original which fell seamlessly in place at the end of the album. The Amen Ra remix of, ‘You Go to My Head’ is an especially captivating track which creates an entirely new club-friendly more bass-heavy take on it’s original.