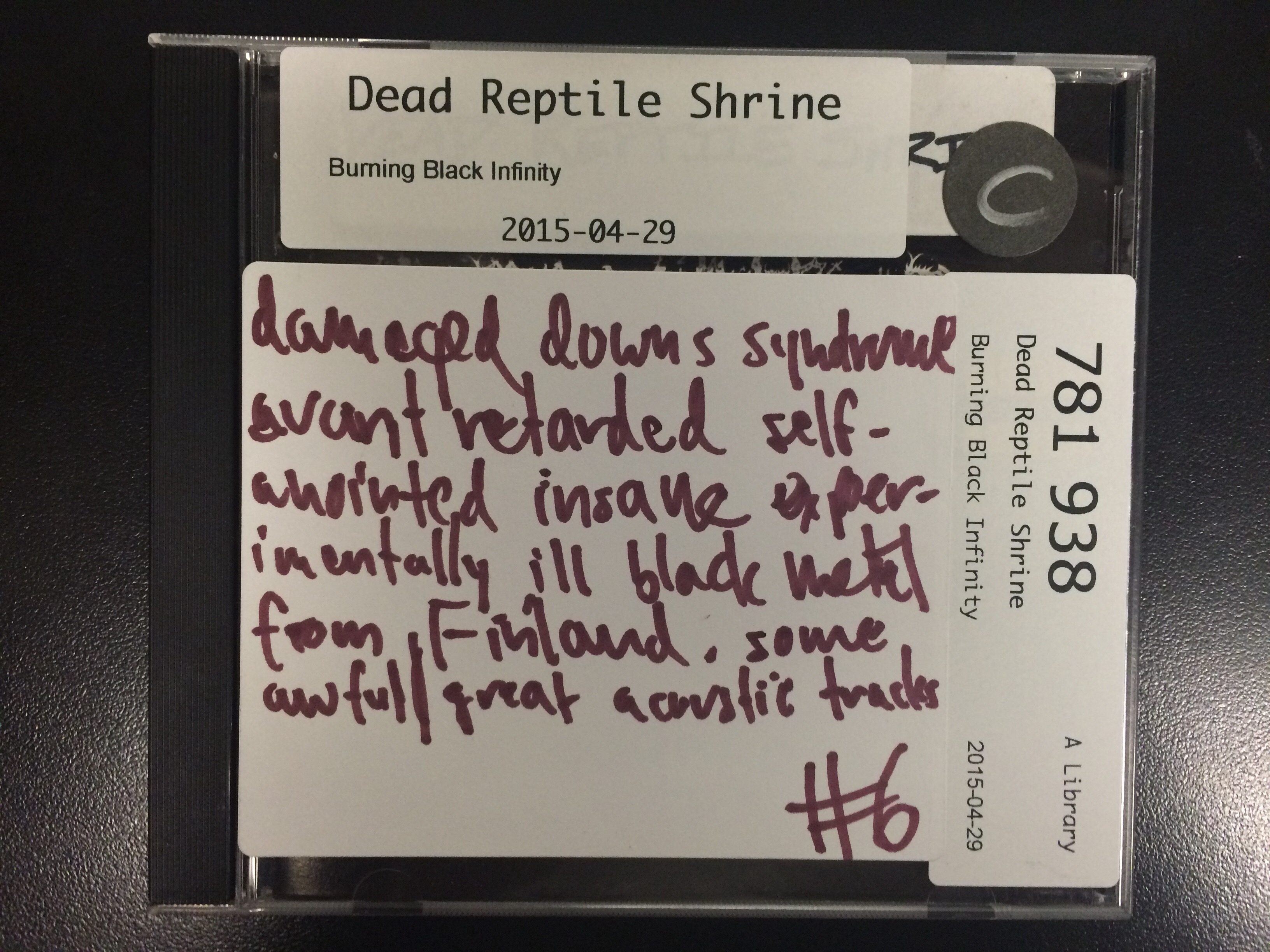 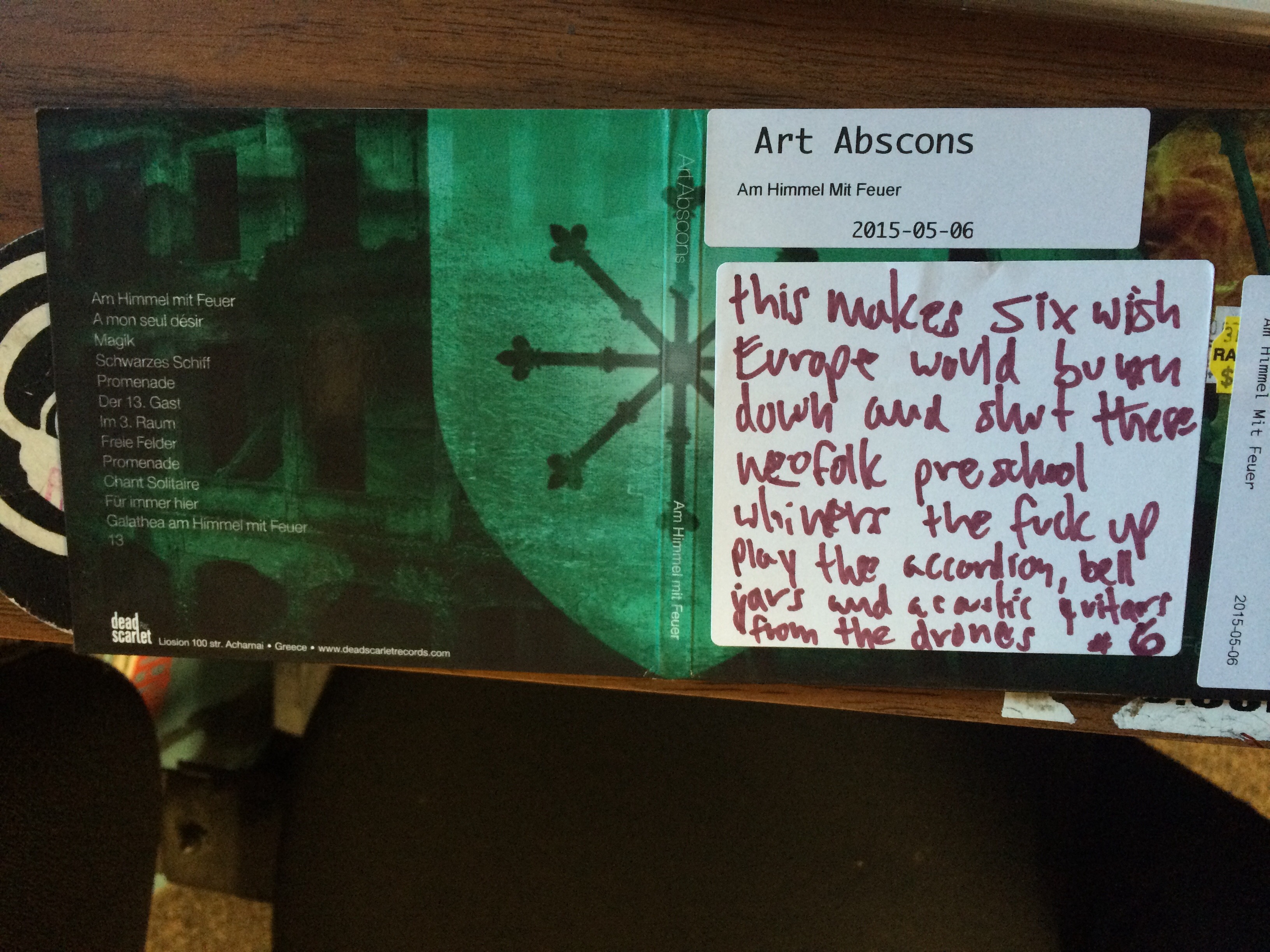 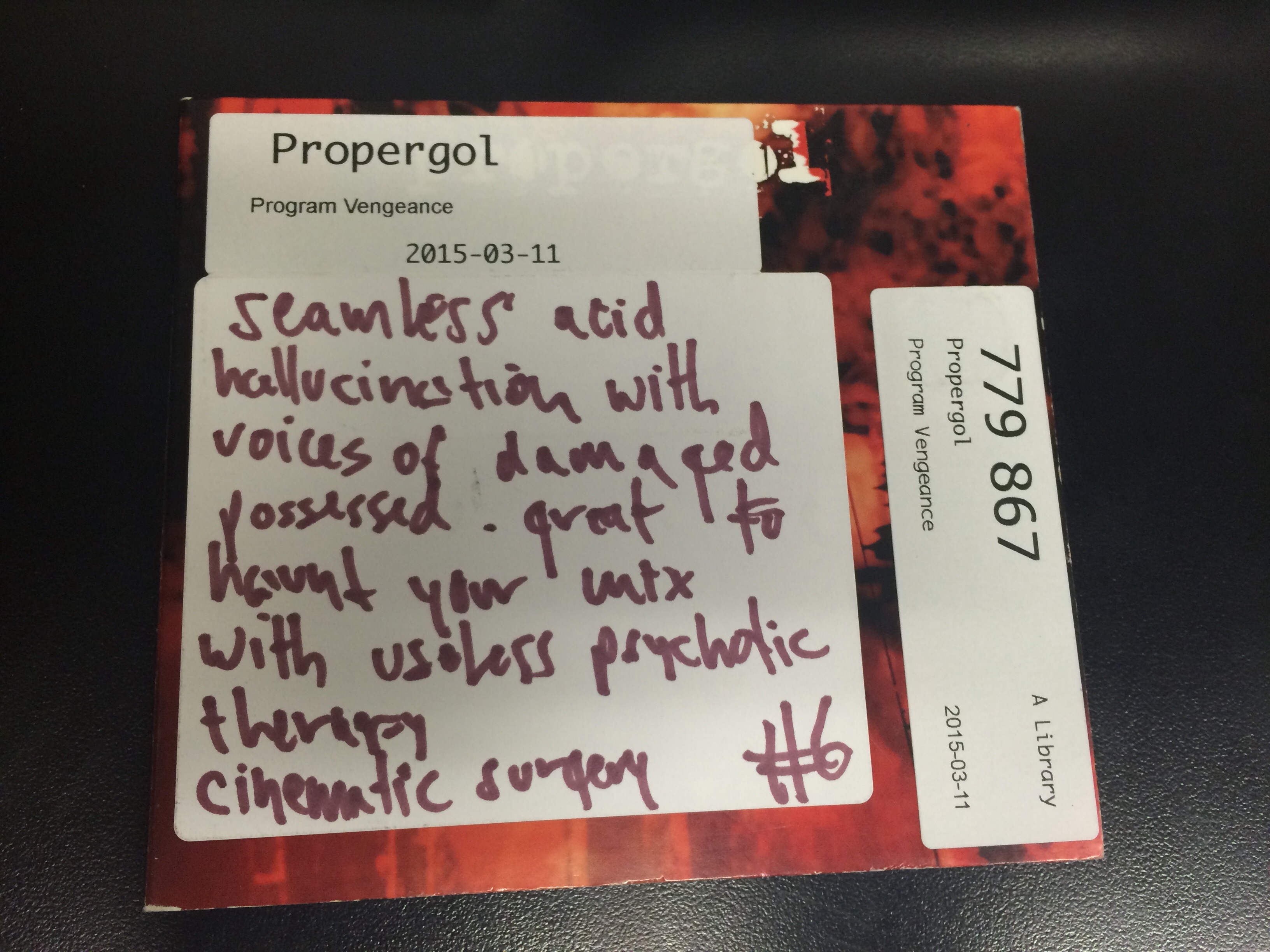 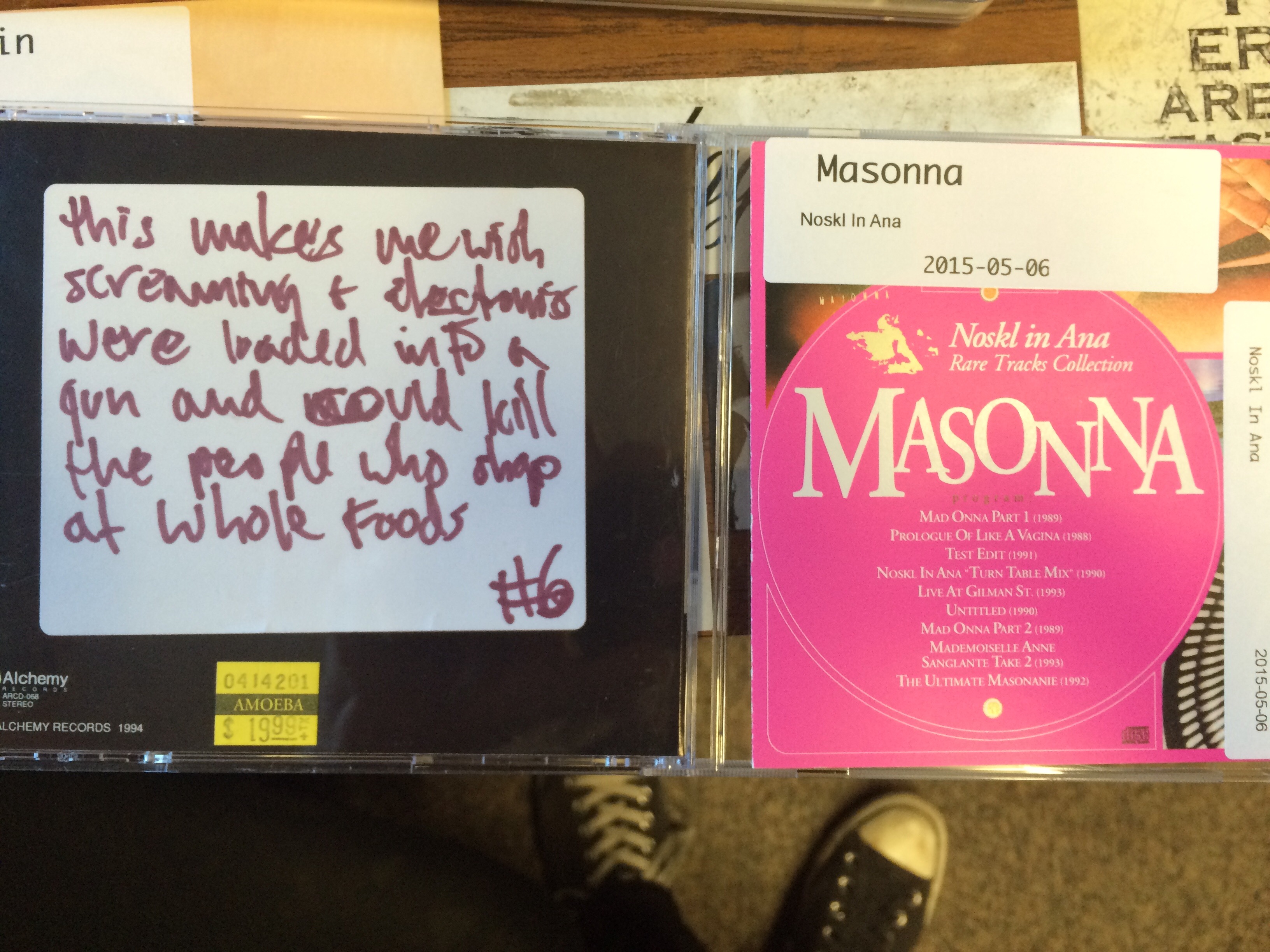 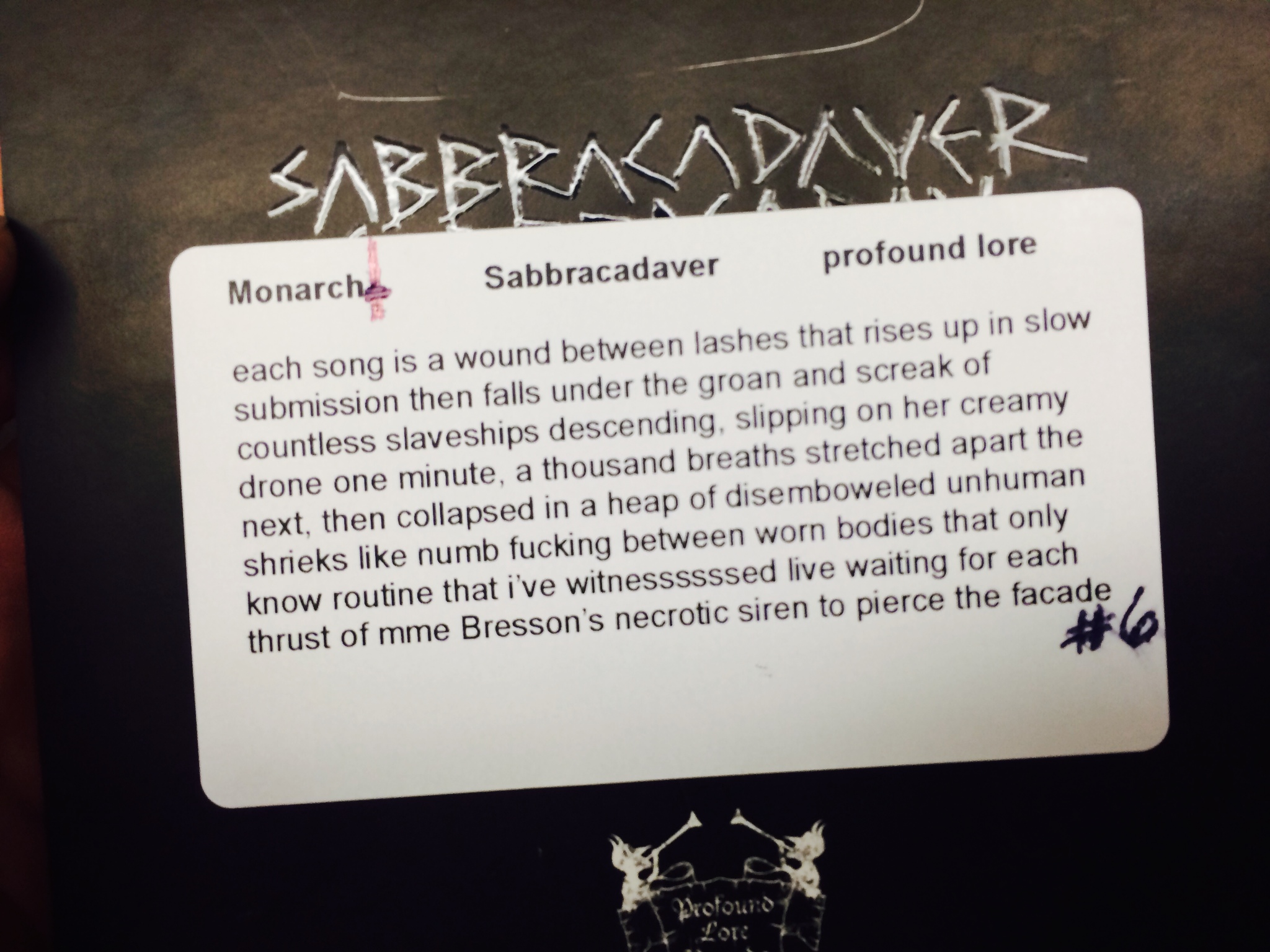 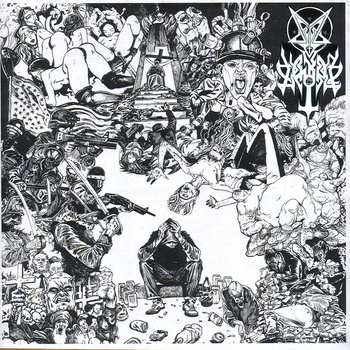 acquiring SATANIC metal icons is a cynical approach by a hiphop team applying a similar ruse in their sneering satire of the 7 deadly sins, predictably aimed at a decadent market that demands consumption or expression no matter the cost to their widening orbit of destruction. ALL FCCXXX. overall old guard feel with the intelligence flow sometimes relying on cliche and nearly always slung by semi-automatic triggers, but mostly full of loose, spontaneous slips of cum and cheek dressed in the smoke of insecure effort to still sound badass and wicked. EVIL FIGHT EVIL for fun. a welcome boy/girl/boy rally (Nickie P mmmmmmm) offsets a self-righteous tone that occasionally makes you forget you???re supposed to be bad not good about the glorification of SIN 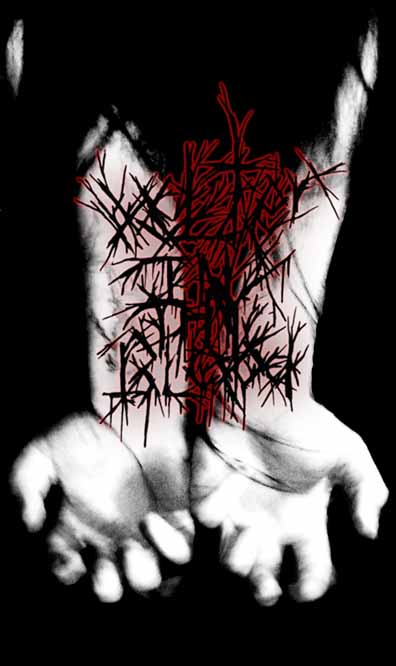 if this is any indication of what the extinction of the human race sounds like then get the fuck out of its way or fall under its command. there are many contenders for this bleak style of metal, but Welter In Thy Blood draft the best elements of the left hand path. if you can survive the call to suicide in every chill scrape of anguish and hatred on this miserable road to annhilation then consider your self unlucky. at least you know it will start in LA and not in the Netherlands. suicide is a virtue and you’re better off making your exit now or if you can endure this hellish call to action then you probably love killing yourself slowly to suffer another day. there is a lot of depressing metal out there that tends to lack much conviction or worse, romances the point with post-rock progressions. Welter In Thy Blood’s Todestrieb shuts that false shit up once and for all. this puts the suicide, the hate, the black and the doom back into this type of metal abstraction where it belongs and finds common ground with the shallow, dry primitive chill of black metal (Xasthur, Vargr, Wold), the lumbering funereal dirge of doom (Bunkur, Planet Aids, Nortt) and the ambient cacophony of noise (Abruptum, Whitehouse, Emit, Skullflower). a difficult and challenging test enveloping harsh freezing cold, yet scalding abrasive heat. intimate, yet far away, unattainable. haunted voices, tortured screams and hateful roars overlap and more often barely distinguishable as human. minimal minor key melody lifted by a constant subterranean tone with guitars crashing like walls of ice accompanied by possibly amplified objects of various metals and barely audible piano. swerving into oncoming traffic. 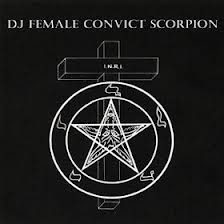 the satanic imagery on the cover and the forked tongue titles may cause your eyes to roll upward like a consumer possessed by shallow spirits of hype and promotion. special ed teens don’t suffer from such cynical prejudice. they demand to know what kind of music is this! and then describe this one as “weird” “messed up” “like a movie” “scary music” “creepy” “you’re crazy, Mr. M” and so it goes in the library with a seal of teenage approval. for the rest of us ignant fogies, you might be impressed with his imitation (tribute?) to the classic KFJC dj mix/mash. there are obvious samples of things played here at kfjc. did he remix kfjc? so, it is cinematic and dreamy but noisy as well with the occasional breakfast beat 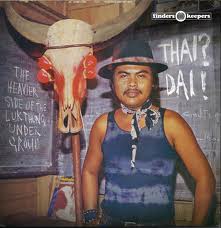 passionate dedication of Chris Menist to put together a mixture of the Luk Thung style (song of the country) and the Luk Krung style (song of the city) unearthed from record stores found in Bangkok, 45 singles and often discarded B-sides. only a few artists appear on other collections in our library. what stands out according to the liner notes is how these artists have adopted various western styles, going so far as to recycle specific riffs (Iron Man, eg.) and melodies, yet make these songs all their own. apparently these tracks were tested at various live crowds alongside reggae and African music at an event called Pardise Bangkok. many these tracks were considered uncharacteristic of the artists’ more conventional releases. therefore you can expect some rougher and more raw experimentation. 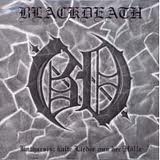 .
Russian black metal veterans blast and pound through some odd jagged arrangements and very Circular whirlwinds that capture a sense of frustration and hatred hailed with martial victory. for those unfamiliar with this style, expect dynamic repetition layered with war machines that sound more like insects and buzzsaws. two brothers finally found a drummer (uncharacteristicly female) and upped the production to give this so much depth while not losing any of its dry crusty buzz. the vocals are weird, raw and barely F/x’d; not typical of the genre, sounding much more hardcore in a way without abandoning their Nordic metal roots. truly mesmerizing 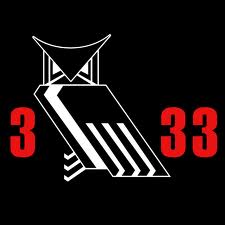 keeping it mysterious and dark, this is heavy as fuck languid hip hop that rolls back the 90’s clock for a hazy warped groove that has more going on than the repetitive breakbeat. the intro sets the surreal mood but soon yields a series of overdriven piledrivers. this will blow up the optimod, so watch your levels. you might find some connections with Wu-tang, Spectre, DJ Shadow, Atmosphere and even Bowery Electric. may also appeal to the dubstep dipsters in ever corner. sadly this promo disc doesn’t include a remix track recorded with Del the Funky Homosapien and Tame One. fuck. so relax and space out to all of these voiceless headplodders. 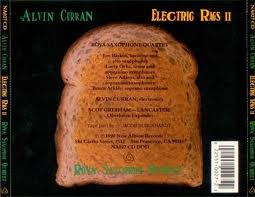 this is what happens when horn flatulance meets honking vehicles stuck in a Silicon elephant jam. more often than not there is more tranquility than meets the midi eye. for the thinking fella, you get these patterns and melodies making intercourse with the computer. what comes out is queefer air improv. the louder you play it, the better. you dog may not appreciate it. a class of high school students with disabilities endorsed it. Number 6 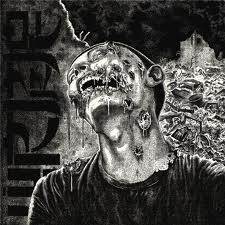 unhinged whiplash grindcore splatter from Singapore. you know the braindrill: short, fast, mathy grooves and jagged metal angled punk like a pit of fighting dogs roaring in hate and disgust with humanity: the everlasting everpresent boot of oppression. played all together it sounds like variations of the same song. best if consumed live in the flesh mangled pit of blood, sweat, alcohol. the record sounds better produced than they sound live, which doesn’t soften their fercocious attack but can’t match their legendary raw performances. give Trix a beating for bringing the band to the KFJC pit. Number 6 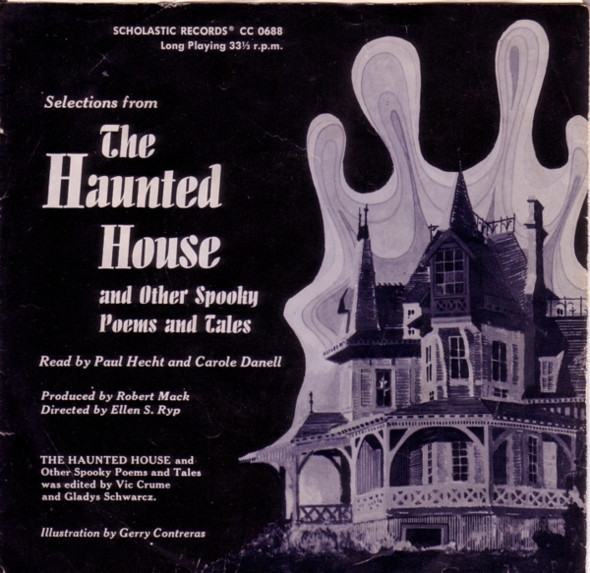 Haunted House, The and Other Spooky Poems and Tales [coll] – [Scholastic Records]

thanks to Ms. Tiza for spotting this ghoulish relic tucked away in a rotting record store bin. some classic tale-telling and less-cheesy than you might think. some black humor cutting at the expense of the victims where the words invoke more impression than a gory ice pick expression to the face. ghosts, cats, and maybe personal demons come to life from secret places that we only know from personal trajedy or from listening round the campfire. some are super short so watch your back..or weave them together into your own web of deceit. 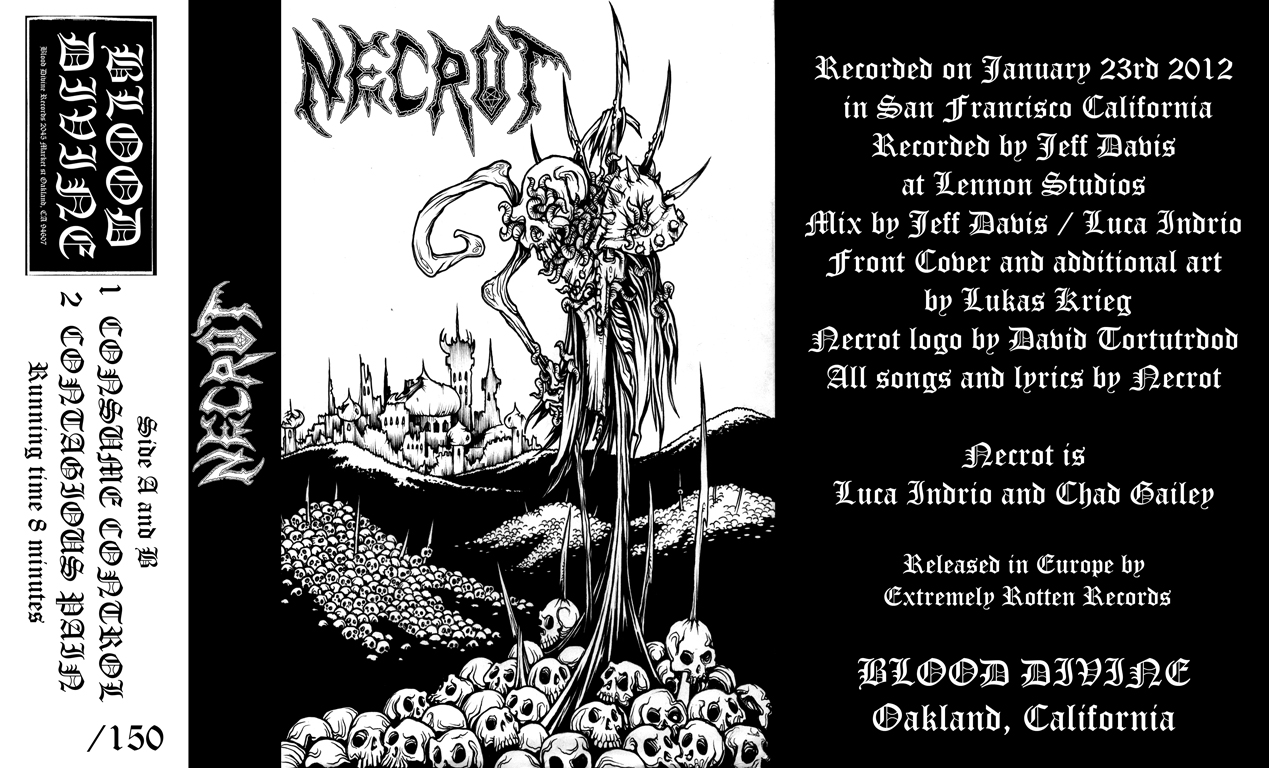 monotonous mockery of metal, noise, punk, Christianity, Maus, Satan, hipsters and anything else sacred you can glean from the gnarled rasps of mostly unintelligible vocals. although this is their 6th album and 5th one dumped into the KFJC catacombs, it continues a familiar course of filthy, murky, harsh, pounding rock caught in a fuckoff between Brainbombs and Butthole Surfers raping Ministry with the Mayyors on top. no surprise there’s a former Skinny Puppy behind the meat curtain, Ken Marshall, or that it occasionally falls off the groove in favor of anticlimactic distractions and fortunately less samples than expected including an excerpt from Edward ???Dirty??? Sanchez???s emergency services call.

after the opening drone jumps into an experimental but clinical breed of thrashcore the album veers into an epic post prog rock blend of modern subgenres that sounds less adventurous than the debut album. unlike the first album, where there was a crowded juxtaposition between unlikely companions such as surf instrumentals, black metal blasts, deck waltzes, orchestral numbers, psych trippiness and of course, math riffage this second album is thicker, fuller and more cohesive like they’ve been listening to a lot of Tarantula Hawk, Pink Floyd, old Rush, Mogwai and especially the psychedelic metal of Enslaved. barely a hint of the surf fun that lifted up the first album, but this will still have the wide appeal of Pelican, Ocean, etc. although elements of various instruments continue to poke through the mix, there’s more attention to threading the parts together to make songs, not work-outs, as evidenced by the addition of melodic vocals. although hinting at post-apocalypse this self-described aural cinema is too gorgeous to feel intimidating. even its heavier, slower edge gives chase to a mutant redneck we all wish was directing this feature.

rerelease of debut album from one of France’s most influential black metal bands in the modern resurgence of the oft criticized, maligned and despised genre. if you missed the raw demos and the limited 2006 release, now’s your chance to hear what attracts and repulses so many. Pest Noire, Black Plague in French and aka Kommando Peste Noire, is all about atmosphere, mood, french nationalism and of course, satanism. what separates them from the ordinary is Famine’s melodic counterpoint to the medieval and poetic decay evident in the lo-fi din of torture and violence. waltz, classical and choral elements merge with wide-ranging guitar solos, blast beats and harsh gagged shrieks that honor the icon of low culture in France’s history. this laid the groundwork for the mentally ill conceived Folkfuck Folie, a masterpiece for some, a disaster for most.