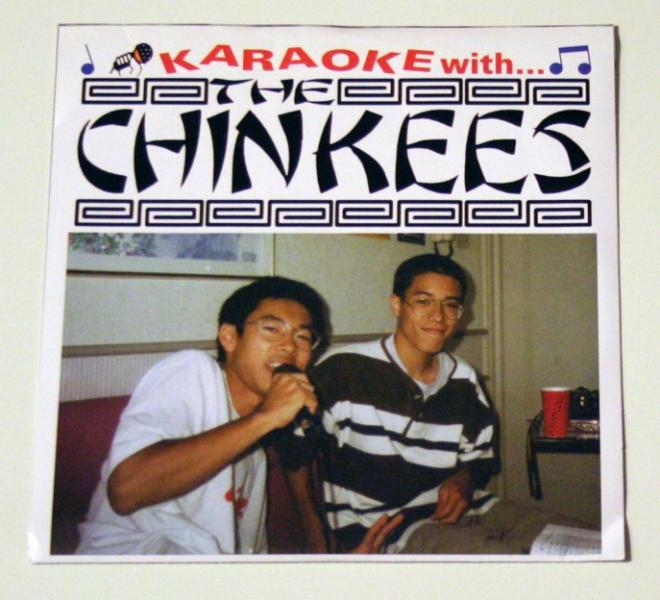 South bay ska punk legends give us this rocking seven inch with two-tone flair and punk rock ethos. Up beat and dancey. each Side comes with a instrumental track of the song so you get to sing a long at home!!!! Wow! Is that just so kind? Rock it hard if you miss The Specials or your high school ska band! 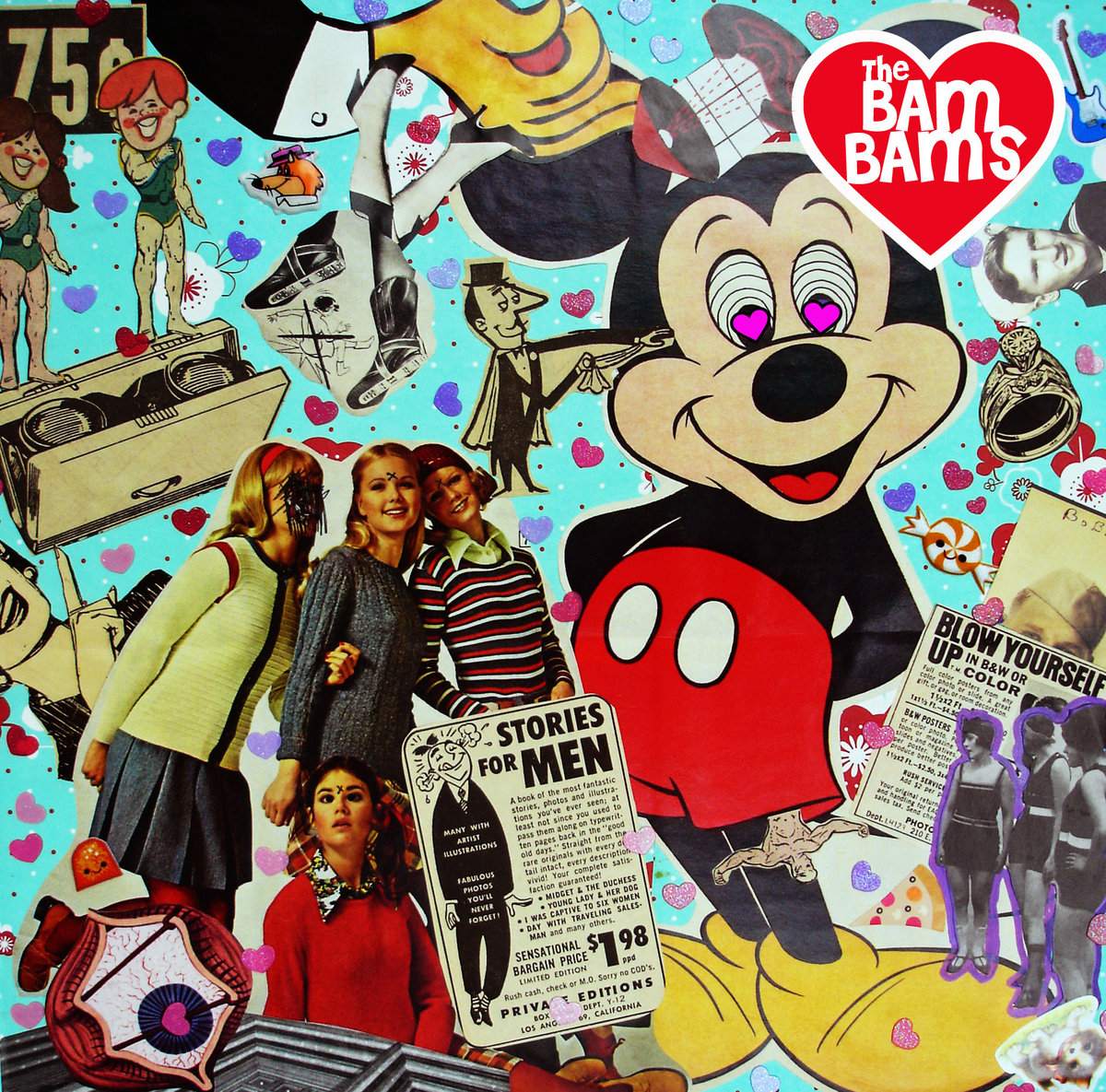 Bubble Gum Power Poppers, The Bam Bams, pour two tons of sugar into ’77 Garage punk and let it spaz out on the floor. Cute, Sweet, and all so neat. These ladies must have spent sleep overs drinking, talking about boys, and worshipping the Buzzcocks! Very up beat and energetic! 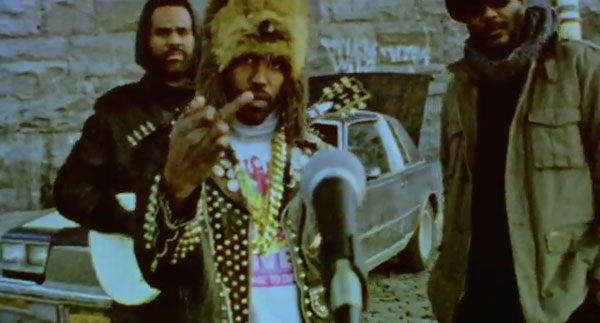 White Mandingos, The – “Ghetto Is Tryna KIll Me, The” – [Fat Beats]

Rap and Punk???? It???s Happened before, check out DeeDee King! Murs, Darryl Jenifer (Bad Brain???s Bassist), and Sacha Jenkins (former Rolling Stone journalist and VH1/MTV Producer) hit the ground running with this ???Fuck You??? to the music industry. Comprised into a concept album about a man named,Tyrone White. Who is a black man that is looked down upon in the Black Communtiy for loving Punk Rock and White Women. He starts a band and gets a deal, falls in love, battles the evil racism of the major record labels, and learning to except what you are/never bowing down to what other want of you. Kind of has the ???Tommy??? or ???Lola Verses Powerman??? vibe going. A lot of this album feels like filler, but the gems on here shine very bright. Nice mix of Hip Hop, Punk, Classic Rock & Reggae. Samples from harDCore Washington DC bands (Bad Brains and Minor Threat)! This was a pleasant surprise! 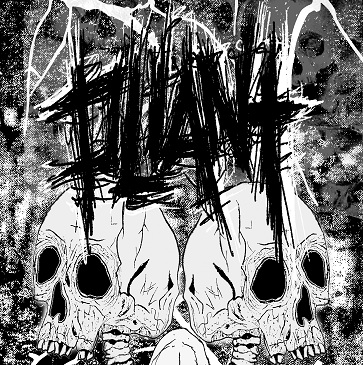 I bet These are some really nice people, but they sound like they want to punch me in the face. You’re About to get the aggressive blunt force of some of the best “Fuck You Punk” out now! All around twisted and fun! Pure Brilliance. 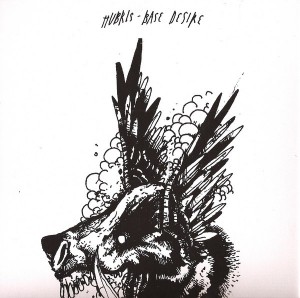 This is the soundtrack to someone pushing instruments and amps of a building. True grit, no glamor for the Hubris fellas. Nothing but raw, distorted, messy and chaotic hardcore punk. It sounds like they are playing to hard on their instruments and turned their amps up past 11 and their middle fingers are waving in the air. You are in for the tornado ride of blast beats, crashed out strings and screaming into a garbage can shrieks! This is for all the “real” angry people out there. 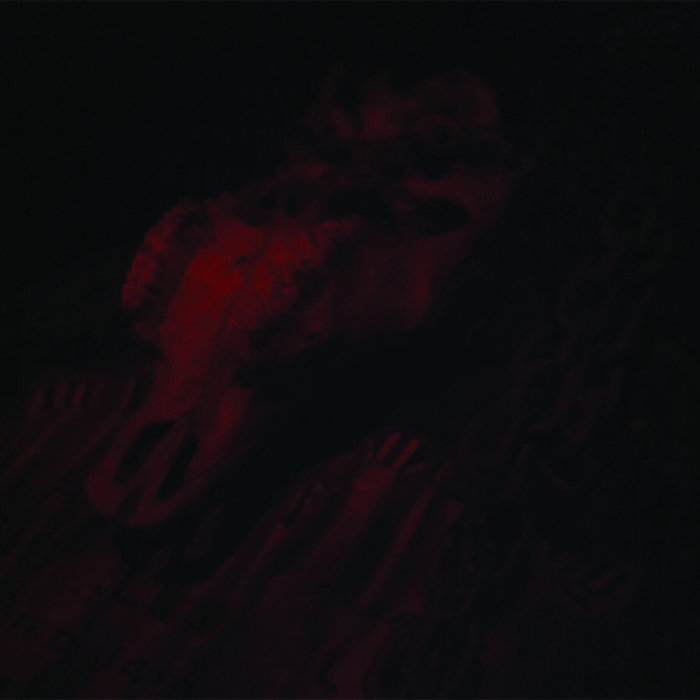 Inhuman death doom from Queensland’s most dark secret, Grave Upheavel. Cower before the blood curdling growls from a hell beast on the lost level of hell. The trainwrecking blasts of distortion and fuzz will leave your body limp and shacking. You know This behemoth will devour your carcass into the black void of the doombringer’s belly. He’s made up of gavestones and the bones of the damned. Repent for your demise will be merciless and slow. 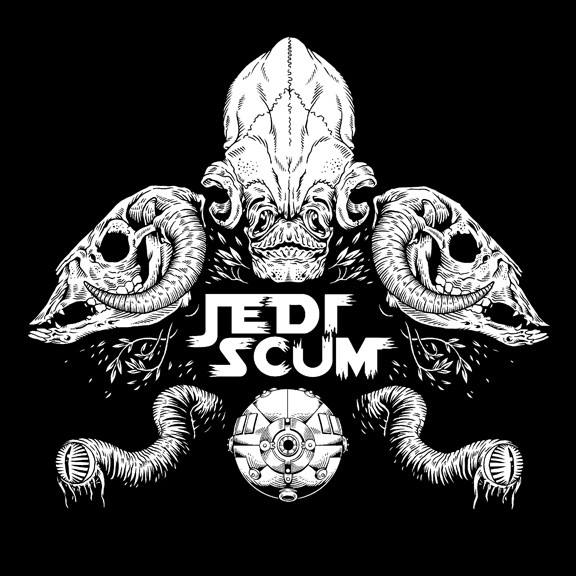 Dirtier then a wookie after a pod race. The sludge-nerds, Jedi Scum, bring us what can only be called “a New Hope” in the genre. You’re about to fall into the sarlacc pit of Sludge, Powerviolence, & Episode four samples. All around great head banging geek fun on here! Blast this while you’re bulls eyeing womp rats in Beggar’s Canyon, in your T-16! 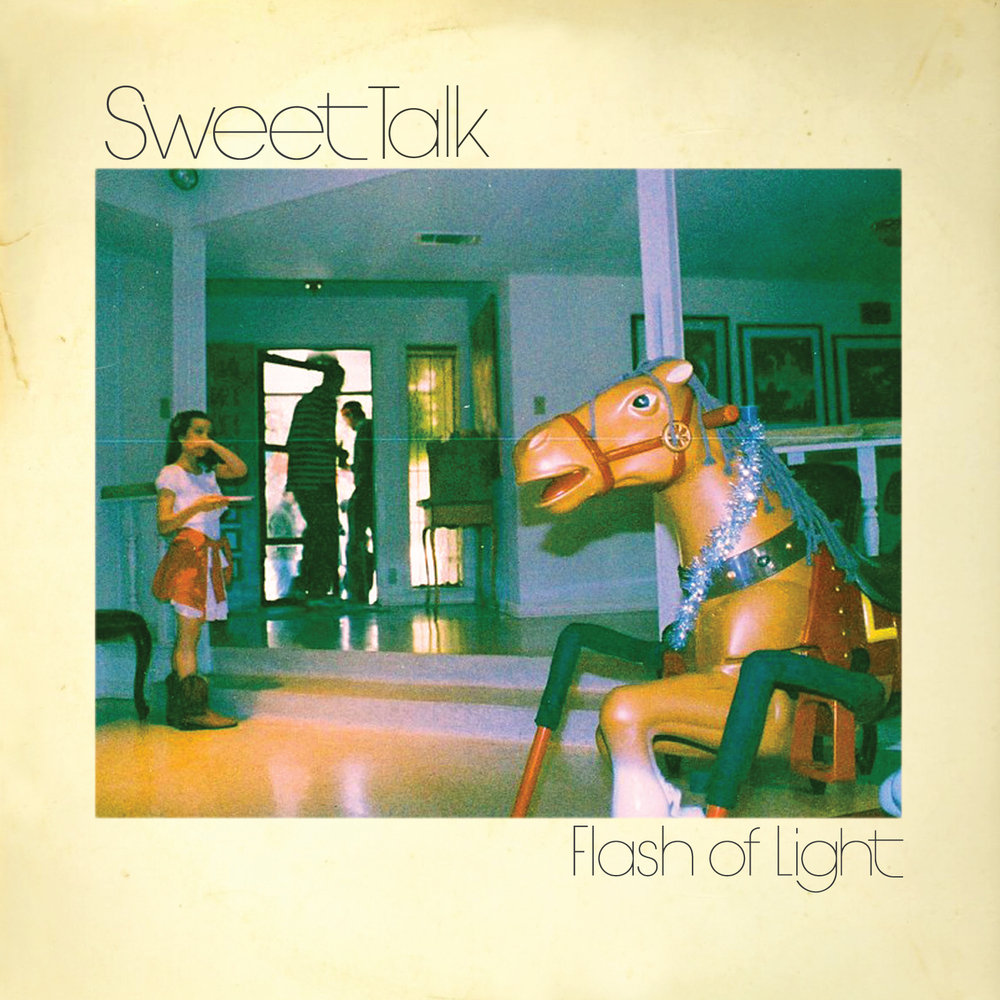 Sweet power pop from Austin, TX. It’s a playful mix of The Replacements, Lemon Heads, & Squeeze, but a little more garage-y. Fun three chord fast pace songs about love and life (classic topics, yeah?). Don’t over look this if you think it might be too mellow. Nothing but up beat rhythms and splashy reverb solos. Try to not get these songs stuck in your head… 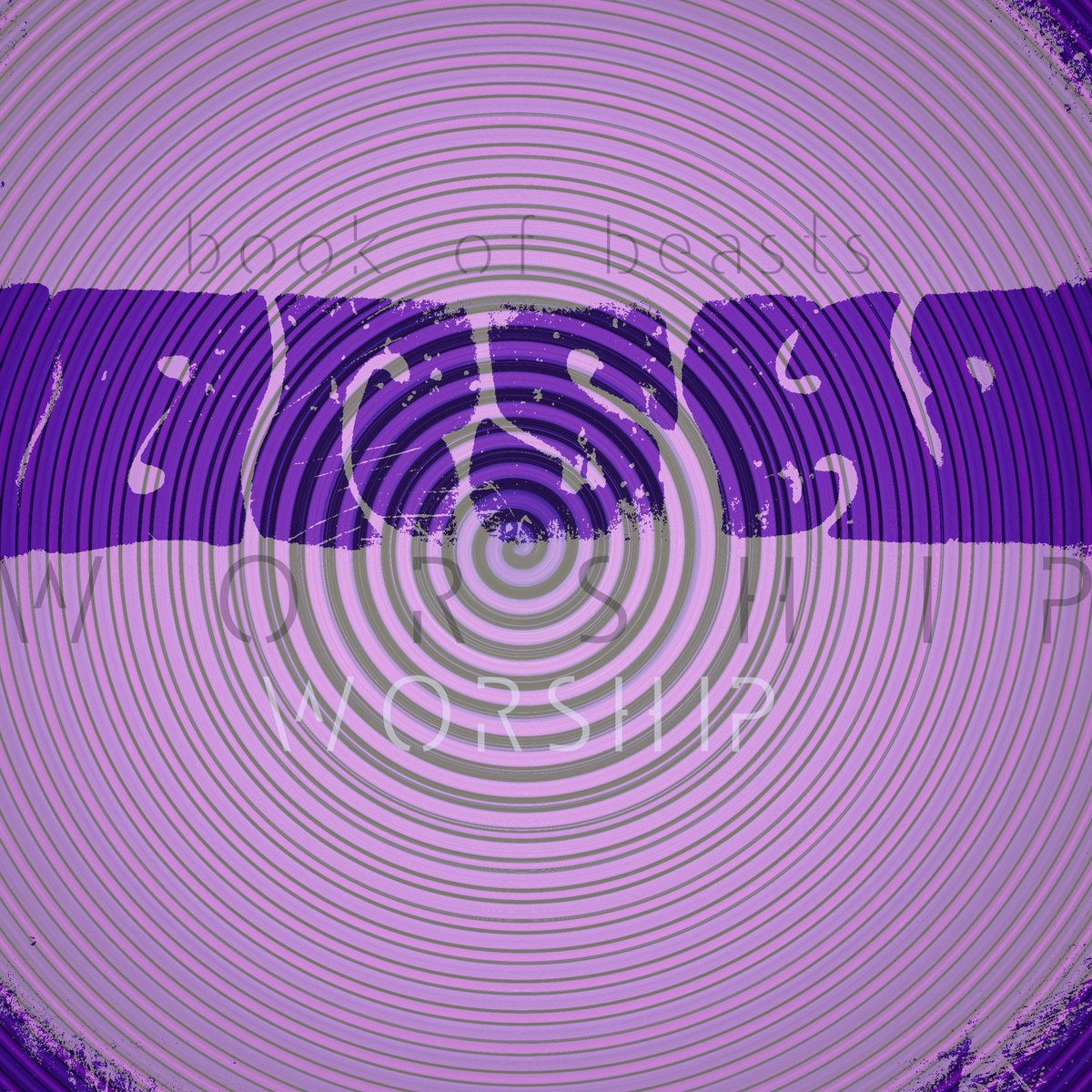 Worship – “Book of Beasts” – [Self Released]

3 tracks that will run you over like freight train on fire. Crunchy, heart popping, bone rattling sludge metal from this Salinas 3some. Thick as syrup ooze bass chugs along with low end guitar and 5th gear drumming that creates a sonic blast to shatter your skull and evaporate your brain! 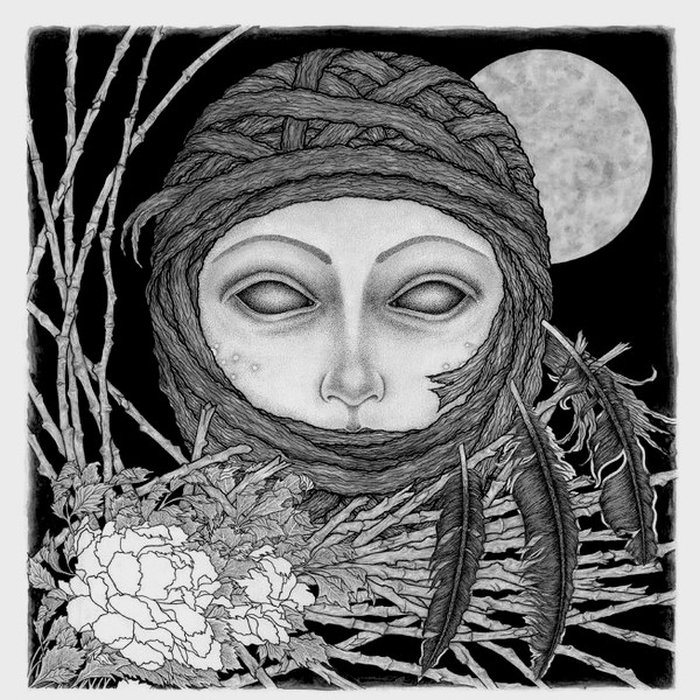 “WE WILL NEVER BE DEFINED BY OTHERS. NOISE FOREVER.” More truer words could not be spoken for these Maryland head throbbers. Blistering-dentist drill guitars washes over Thudding bass and drums. Screams from the unholiest pit you can muster from your bowels; garnish this lovely lovely lovely album. I get the aggressive feel of British hardcore/anarcho bands like Discharge, Doom, and a nice little bit of “Hatred Surge” Napalm Death on this LP. Side one is the rapid fire of songs. Nothing but scratchy, heavy anarcho-punk-noise. Side two is one long track. It starts with this pleasant piano based ballet song in what appears to be some sort of foreign language. Then crashed into heavy drum driven distorted as fuck punk. I love this album. There I said it. HAPPY!? 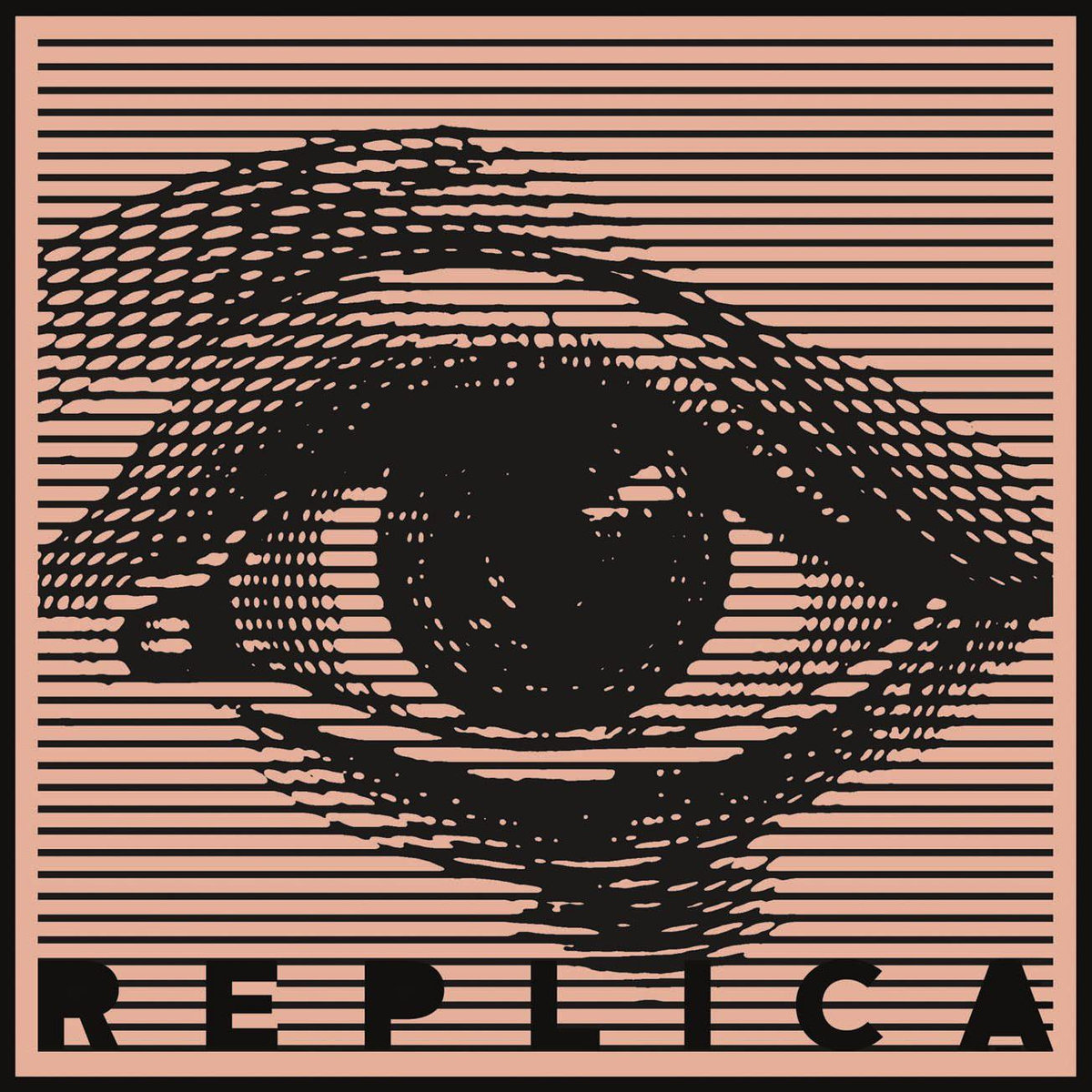 An unmerciful attack on the system with this straight to the point seven inch. Vicious ,as a pack of dogs, guitar riffs. Bloodthirsty bass madness. Blistering, blastering, nose bleed giving drums to balance out the mix. Top it all off with ravenous gutter vocals. Then you got yourself the making of a brute force to be wreckin’ with. This album will hurt you. It’ll push you around and body slam you in the pit! 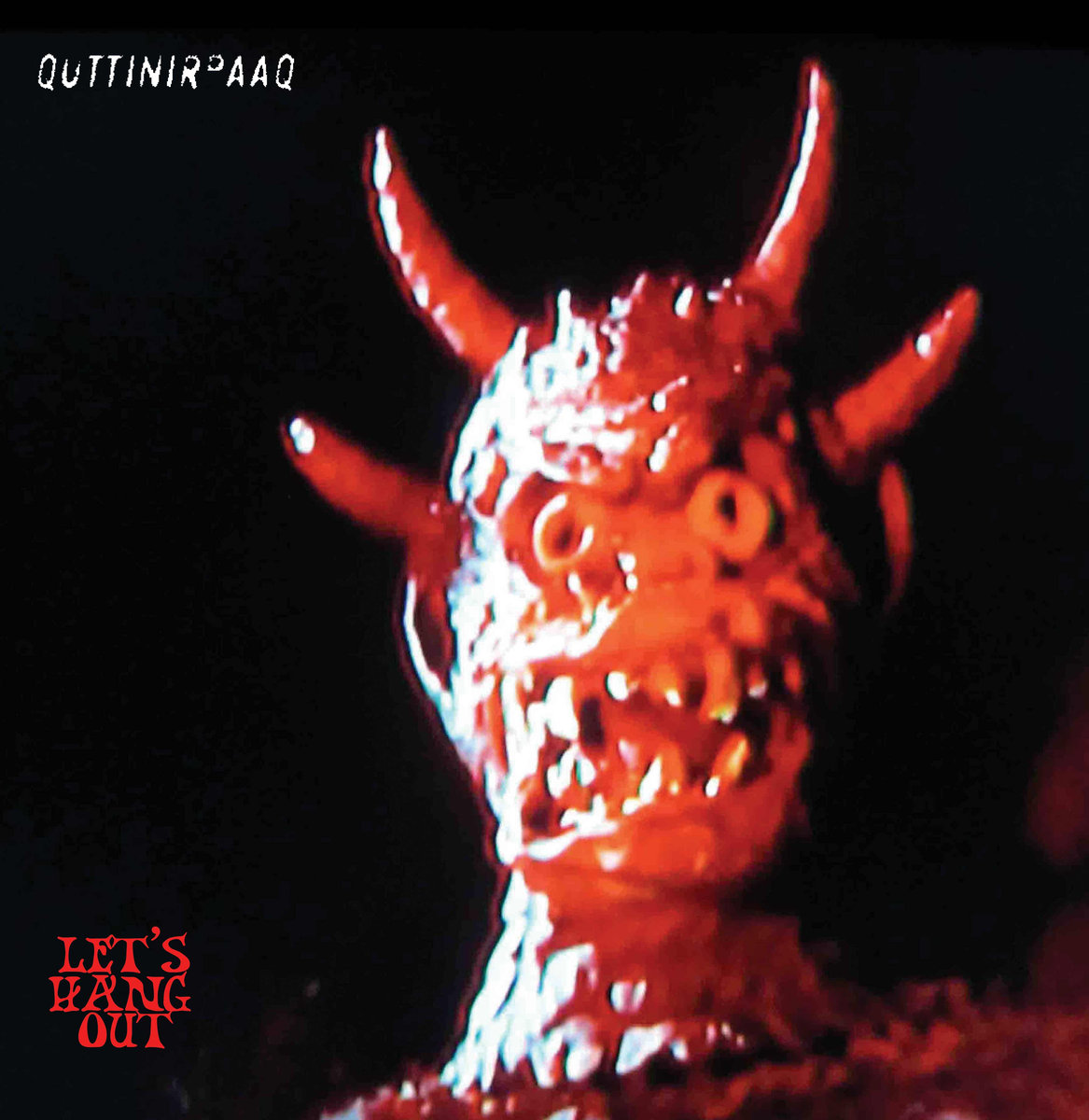 BRILLIANT! Thick as syrup bass licks running a muck. Fuzzed out space noises being cut with messy scratching and screeching effects. All being rounded off by the bash your brains in pounding of the drums. This is ugly, painful, and single handily the most whacked out bass sludge ever. Low vocals fade in and out. Some crazy “Industrial” esque filth end both sides. So much grit and so much grim! 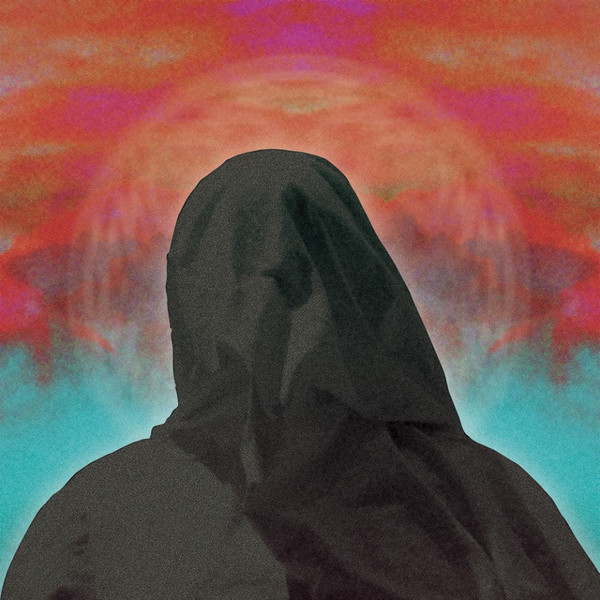 Imagine you are zooming across unknown space, smoking the finest intergalactic grass in a nuclear powered stoner Space Van! This would be the cassette tape stuck in your stereo. Two heavy 20+ minute riff soaked tracks on here. Glasgow’s “Cosmic Dead” gives you the grooved out bass and drum combo, swirled around with kraut rock esque synths in the back and then you’re trampled by a thick warm creamy guitar licks that’ll send fuzz up and down your spine. Think “Sleep” meets “Hawkwind” in a cloudy space mist. Then, you have Newcastle’s lovable “Pigs Pigs Pigs Pigs Pigs Pigs Pigs”. Their track is a throw back to the wild days of 70’s rockers. Take Gibby Haynes(of the Butthole Surfers) and add The MC5. Crank up the distortion and watch the shit fly! This is a bong rattling, bowl torching, smoke filled split. 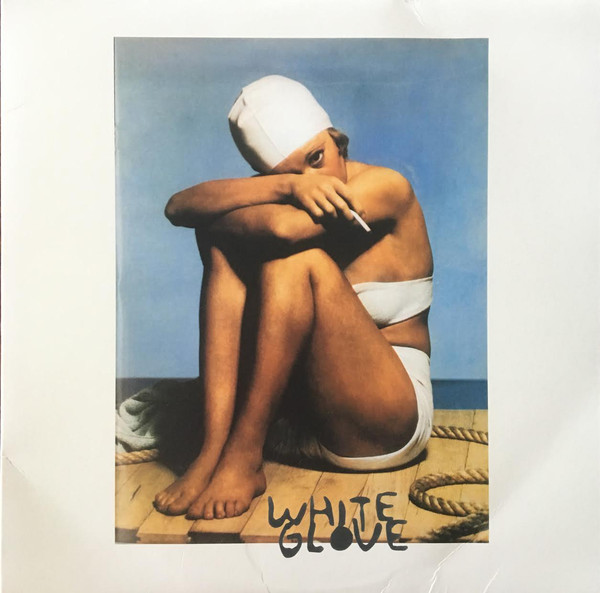 Those lo-fi acoustic punkers, White Glove, really know how to get a song stuck in your head. They remind me of a mix between Beat Happening, Super Chunk, and The Ramones. Duel snotty vocals about love, skateboarding, smoking weed, and being bummed out. I love the simple acoustic guitar and snare/ bass drum. Simple is better. Just listen to these guys! 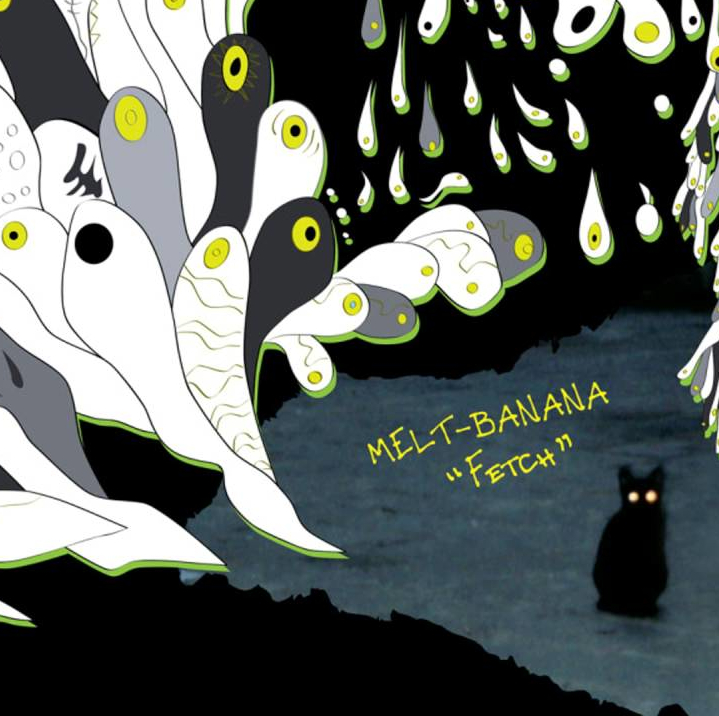 Melt Banana is back and they are going pedal to the metal on their newest effort! “Fetch” is the classic Melt Banana we fell in love with and respect. Hitting the ground running from the first track of pure power thrash bass lines, smoothed over with the 100 MPH drumming and the chaotic madness they call guitar riffs! SHUT UP! PLAY THIS! AND BOUNCE OFF THE WALLS! 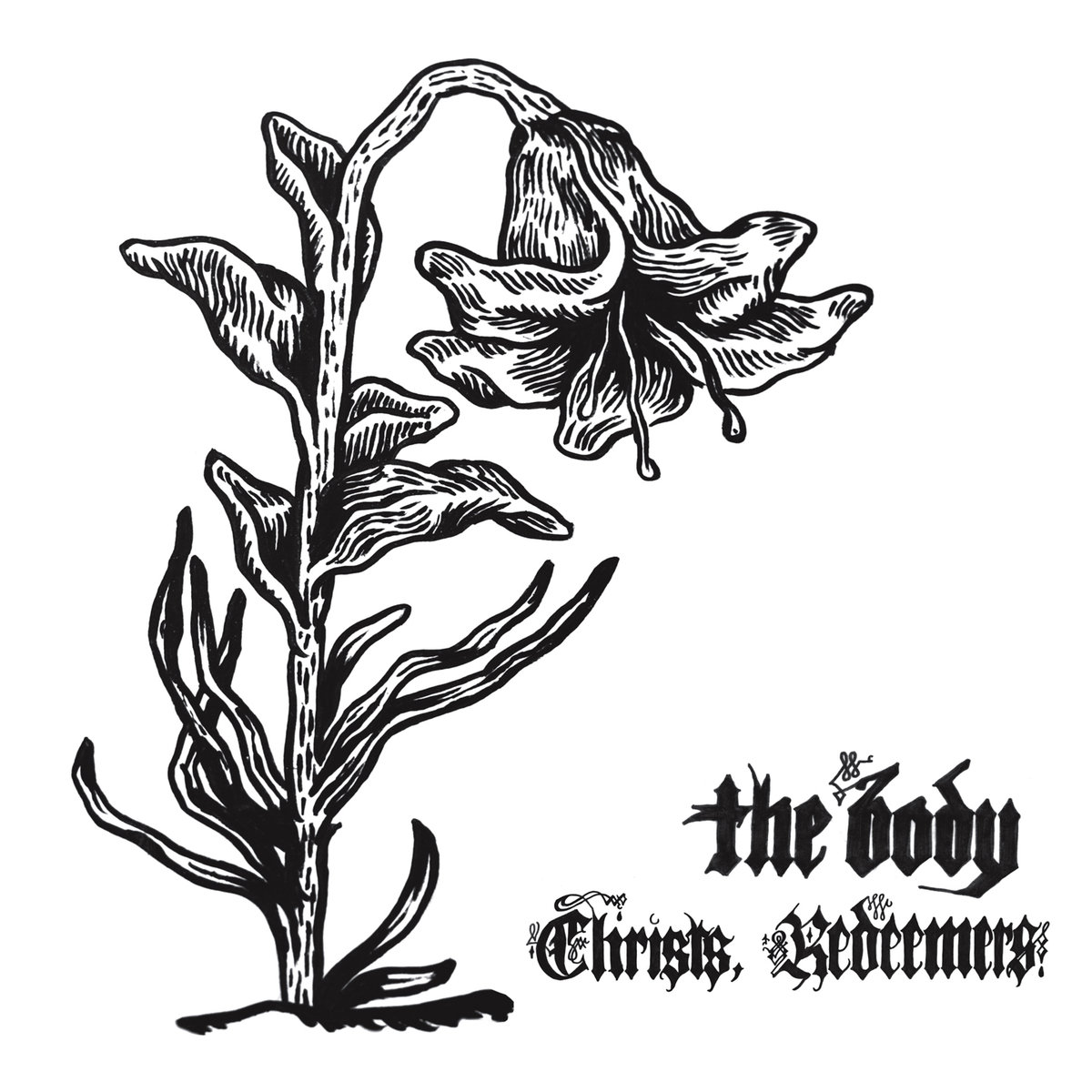 Holy Shit! This is one of the most brutal sludge records I’ve ever had the pleasure of listening to. This is light years away from where the current state of the genre is at. With solid as steel drums mixed with the most metallic crunchy guitar chugging next to it. Not all the tracks are sludge jems. Some harsh-ish noise tracks mixed with beautiful angelic croons that sound as though they are coming from a wailing mistress from the dark depths. Beautiful, Aggressive, and HEAVY! 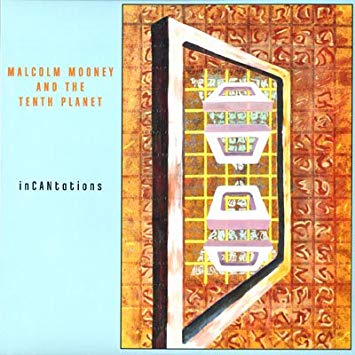 Psychedelic-Progressive Rock legend, Malcolm Mooney (of the band “Can”) and his gang of freak out blues men, give us a taste of velvet underground pyschedelic-folk mixed with delta blues. Mooney’s haunting howl soars high into the clouds. Playing with words and sounds unearthly at times. Tune in and turn out! 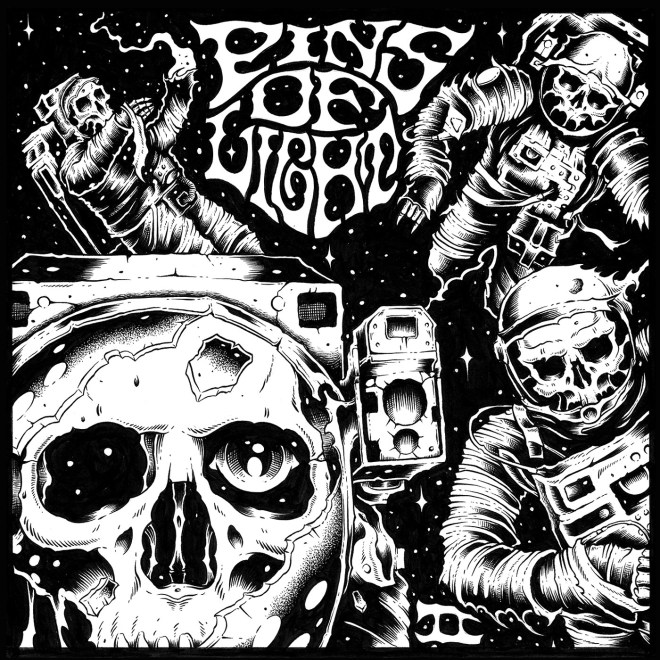 Aggressive, grinding, in your face punk-thrash. Chunky bass driving a million miles like Lemmy hitting the gas. Cut throat guitars wash over brain crushing drums and whiskey soaked vocals to bring you a adrenaline rush that will explode your heart. If you like Motorhead, Turbonegro, or just anything that’s all fuck you, Then look no further. 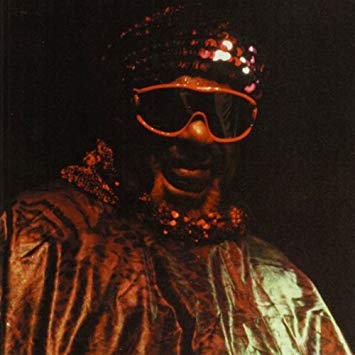 Spaced out Jazz Jams by extraterrestrial composer/pianist. This was recorded on March 28th, 1980. Freak out saxophones, dueling drums, and out of this world pianos swirl into a cosmic black hole of intergalactic wonder. 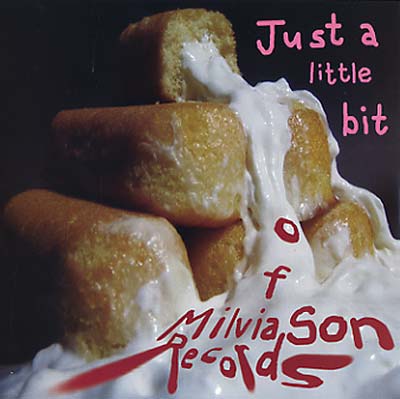 this is a seven inch sampler from Milvia Son Records. Wonderful weirdos from San Francisco, who really like their pop music on acid! This 4 song mix goes from Scott Walker style crooner pop of Bob Frankford into pitch shifting synth wobbles of Jaki Jakizawa on side A. Side B starts with a crash of guitar and drums from Bad Drumlin Grass. Which melts into a frantic beat with spacey guitar effects washing over it. The Track loops into a hypnotic sound scape. Fades in the echoed out folk styling of Petomane. His somber voice floating above, near the heavens asking for some tenderness in a mix that will have your head and your heart swirl.