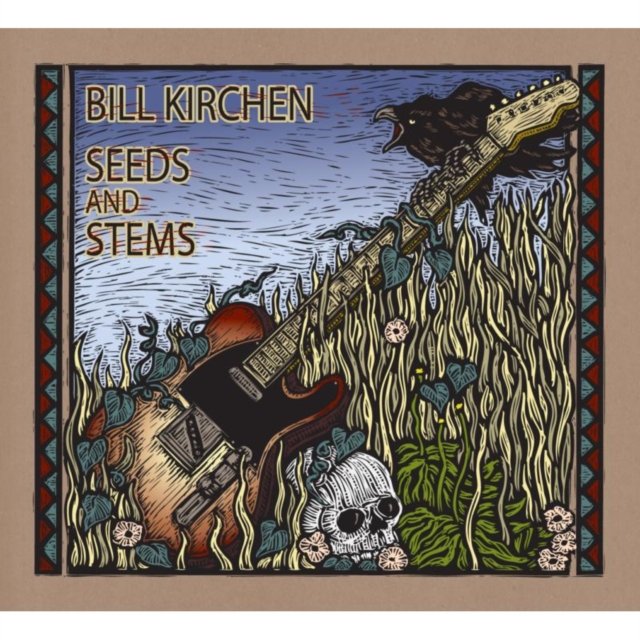 This release finds Kirchen working primarily with his road trio and a few friends. Nearly all of these songs have appeared on various earlier releases by Kirchen, or with the Lost Planet Airmen back in the ’70s, but these stripped-down renditions are pretty representative of how they sound at Kirchen’s current shows — a sort of a “greatest hits live in the studio” approach, easy on the overdubbing. This results in a perfect show souvenir for the merch table and a confirmation of what this group does well: truck driving songs, country weepers, substance abuse anthems, and in the case of “Hot Rod Lincoln”, the history of guitar as Kirchen salutes a parade of heroic axe-slingers both living and dead. Anyone who has seen Kirchen’s live show over the last 15 years or so has heard this routine, but it’s evolved over time to include a few piano players as well, with Austin DeLone adding the requisite riffs. Some may quibble with the recycling of so much old material, but these performances are tight and well-recorded. ((( crimes ))) 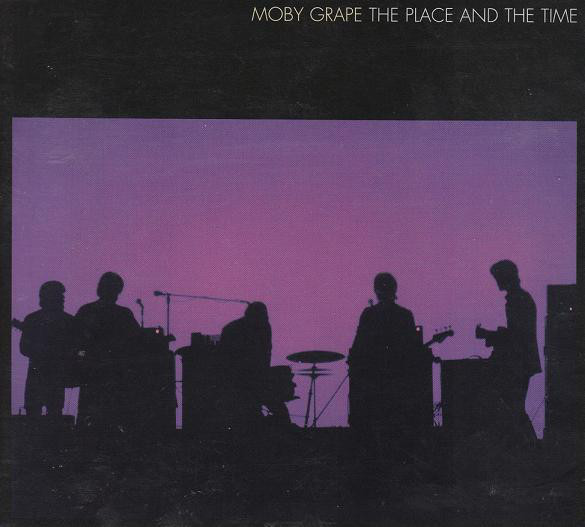 Moby Grape – “Place and The Time, The” – [Sundazed Records]

Sundazed Records had briefly reissued the Moby Grape Columbia catalog, a run of several LPs from 1967-1970, and added numerous bonus tracks to all of them. Shortly thereafter, one-time Moby Grape manager Matthew Katz, who remarkably still owns the name of the band, allegedly forced those reissues off the market by claiming rights to the album artwork that Sundazed used from the original releases. But the bonus tracks remain, as they were never actually part of the Moby Grape album catalog and they are now assembled by Sundazed into this 2 LP set. These range from their auditions prior to their first LP, demos, alternates of tracks released in other forms on the original Columbia releases, and live versions of songs previously released in studio form only. Some tracks are here in multiple forms. Moby Grape was the odd duck in the SF scene, being a group that had multiple singers and songwriters rather than a single charismatic front person. Their three-guitar front line shared similarities with the equally talented Buffalo Springfield down in Hollywood, with both bands favoring short, dynamic songs with a bit of country flavor, although they could also churn out psychedelia as needed. Sadly, the Grape never really topped their first LP, and some say they were never the same after acid casualty Skip Spence left the group for some jail time and a spell in Bellevue Hospital. There’s another Sundazed release that simulates a live Moby Grape set comprised of a number of different gigs, but the tracks here are more a demonstration of their songwriting and craftsmanship. 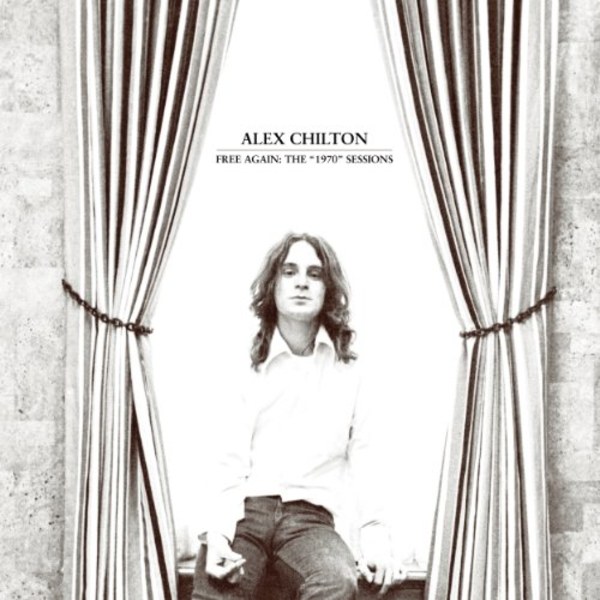 Alex Chilton’s first solo LP was briefly released in 1996 on Ardent and Revola but it was actually recorded in 1969-1970 at the end of his Box Tops career and the formation of Big Star. This newly assembled LP uses some different mixes and adds one track not included on the Ardent version. Chilton had burned out on the Box Tops after tiring of being used only as the lead vocalist but not as a writer. His early songs got recorded for this album while he was still in the Box Tops but his own songs weren’t so hit conscious as the Box Top’s assembly-line material had been. The styles run the range from Beatlish to Nuggets-style garage, Southern white trash R and B, and onwards to introspective melancholia. There’s a distinct country thread here with pedal steel and a bit of banjo. Viewed from the remoteness of 2013, it’s not far from the R and B infused version of country that we associate with some of Solomon Burke’s work and other soul artists who dabbled in country arrangements. Vocally, Chilton can do it all, but there’s a certain exaggeration to the rockier numbers that point towards the sloppy cover songs lurking ahead in his later career. It was probably best that this was not released back in 1970 as heads would have been scratched over his inability to commit to a specific approach. ((( crimes ))) 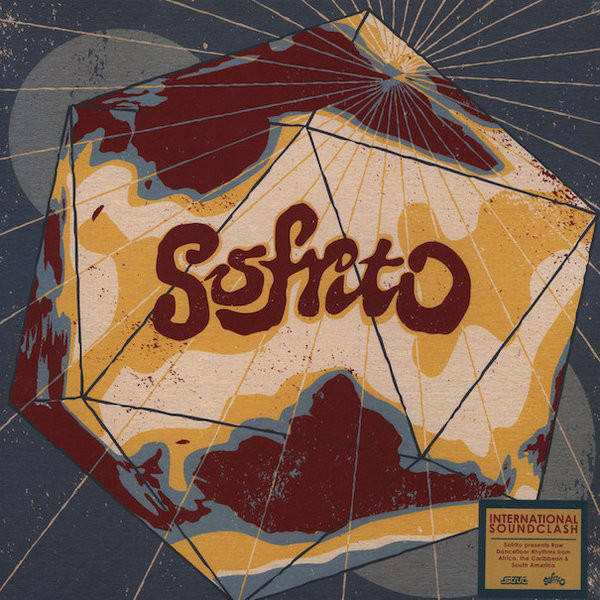 Another collection of dance-tested tracks from the crates of DJs Hugo Mendez and Frankie Francis (this follows up on their “Tropical Discotheque” release). By labeling this “International Soundclash”, they essentially open the doors to anything from anywhere as long as it meets the needs of their clientele. So it’s not so much a themed collection but rather tracks that simply have the right sort of groove from all points of the world, whether it’s plinky-plunky traditional Kenyan sounds (Owiny Sigoma Band), calypso-infused soca (Lord Shorty), carnaval rhythms (Mas Ka Kle), or cumbia (La Pesada). The notes in the insert explain who, what and where. ((( crimes ))) 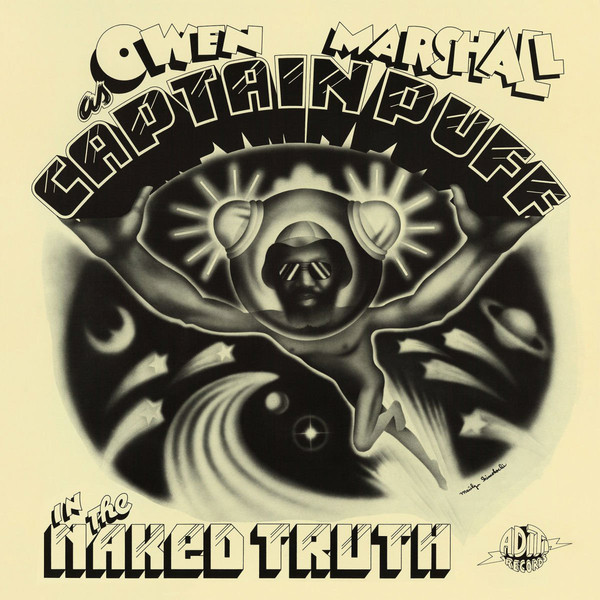 This is a private pressing from 1975 exhumed by some crate diggers. Owen Marshall had played on sessions (primarily trumpet) for Blue Note in the 50s and had seen his compositions done by Horqce Silver, Chet Baker and others. This release found him working at home (apparently with nothing on, if we are to believe the LP jacket photos) overdubbing brass, winds, keyboards and “narration” as well as working with some basic tracks done with a group at gigs in Southern California. The mid-70s had often found jazz acts messing with synths, with mixed results; the synths here are mostly used for atmosphere and effects, not as a lead instrument. In addition, Marshall invented instruments of his own like the “hose-o-phone”. The general sound here is a contrast between the home recordings that have a one-man-band vibe with space effects and spoken word evoking Sun Ra’s outer space journeys layered with the sort of squeaky synth sounds Todd Rundgren favored in his rainbow hair days, and live tracks that are generic mid-70s jazz funk with Rhodes and flute that have a bit of a CTI groove. The single added on at the end is more funk oriented. ((( crimes ))) 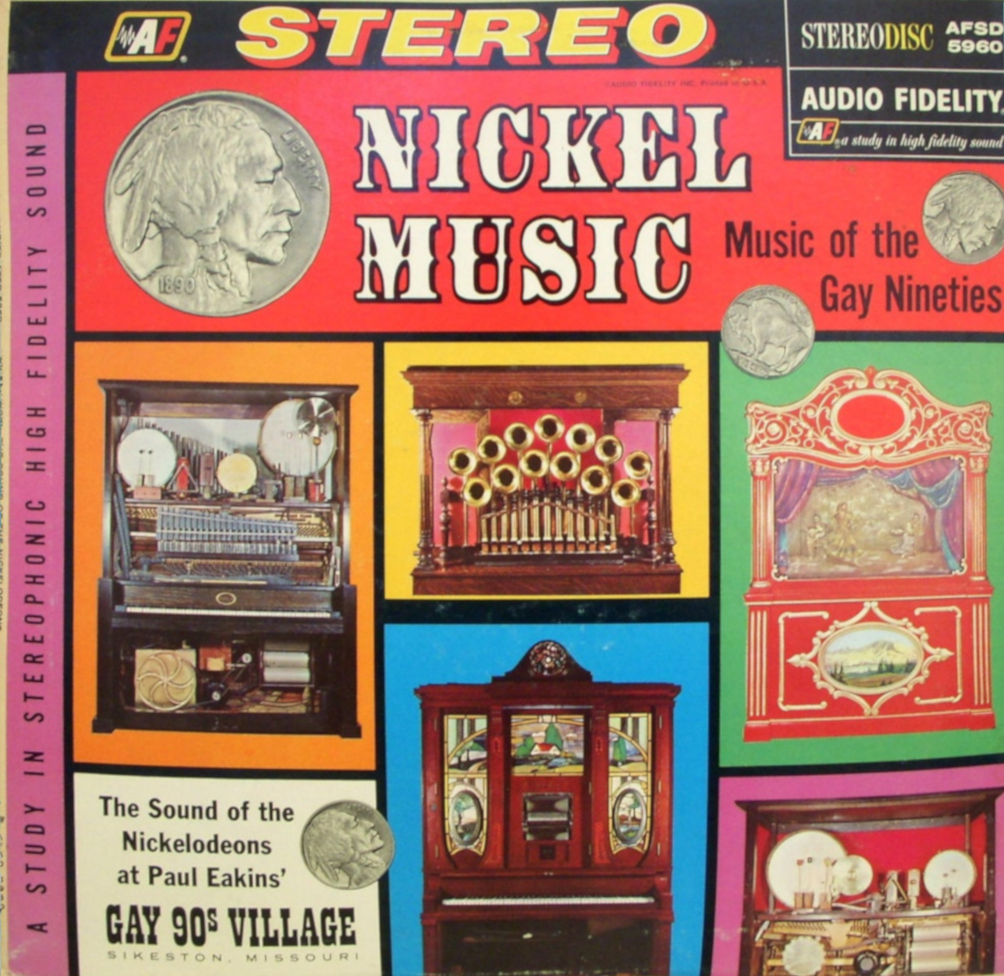 Bringing back visions of monkeys bashing cymbals, music to eat pizza by, bad dates at the Santa Cruz boardwalk arcade, pre-digital ice cream vendors, and certain unsettling episodes of “The Twilight Zone”, this is the sound of machine music, pre-Kraftwerk. Like the Musee Mecanique LP (also in our library), the repertoire draws from popular song of “the good old days” and depending on how old your are, you’ll either recognize every tune here (although perhaps not by title) or walk away confused. Recorded in a “you are there” fashion that includes a coin being dropped into the slot to start some of the machines, these recordings each fly by in an instant. The variety of tones and devices is varied enough that each track has its own mood, and from time to time it would actually bring to mind “normal musicians” with pretty decent robot simulations of banjo playing and sounds evocative of Garth Hudson of The Band, who is old enough probably to have studied devices like these in his youth… maybe he still does. ((( crimes ))) 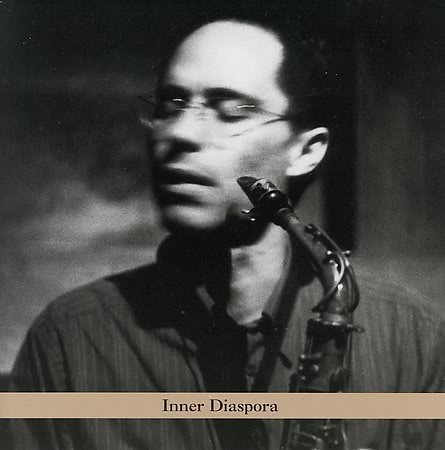 Beautifully arranged (and engineered) music for reeds, guitar, strings, and tabla. Leaning toward harmony and texture rather than some of the skronkier Tzadik releases, this could have snuck out on ECM had Zorn been too busy. Rothenberg wrote all the pieces here, but there’s plenty of room for all the players to make themselves heard. This breaks out of the klezmer ghetto in a big way, and into the wide open spaces with the tabla especially adding some propulsion to what could have been a little too laid back otherwise. ((( crimes ))) 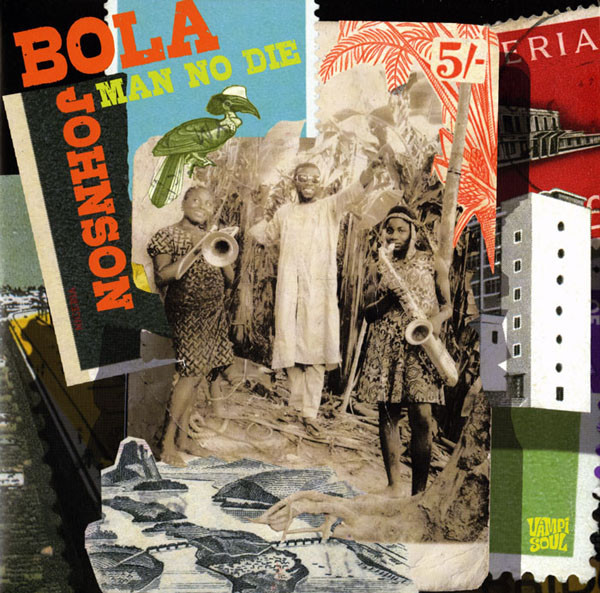 While Fela was refining politically-charged Afrobeat messages to the people and King Sunny was building a guitar army to play hypnotic grooves with his African Beats, Bola Johnson was happy to just play the fool with his grab bag of highlife, funk, calypso, proto-rap, vocal chants, and other styles — all delivered with high spirits and concise arrangements (most tracks about 5 minutes). Sung in a variety of African tribal languages plus English, these songs address decidedly non-political issues like relationships, dancing, and traffic safety (check out the last song, a public service announcement delivered in a calypso wrapper). The horn-driven backing band has much more of a Western flavor than the Nigerian acts I mentioned above, and as you can see by the cover, with Johnson flanked by two instrument-wielding cuties while he dons his Miles Davis shades, this is not terribly serious stuff. But Johnson does mine some legitimate funk quarries here, with wah-wah deployed as needed, and he’s not embarrassed to roll with classic highlife rhythms as well. PROGRAMMING: All tracks include vocals although some have extended intros. ((( crimes ))) 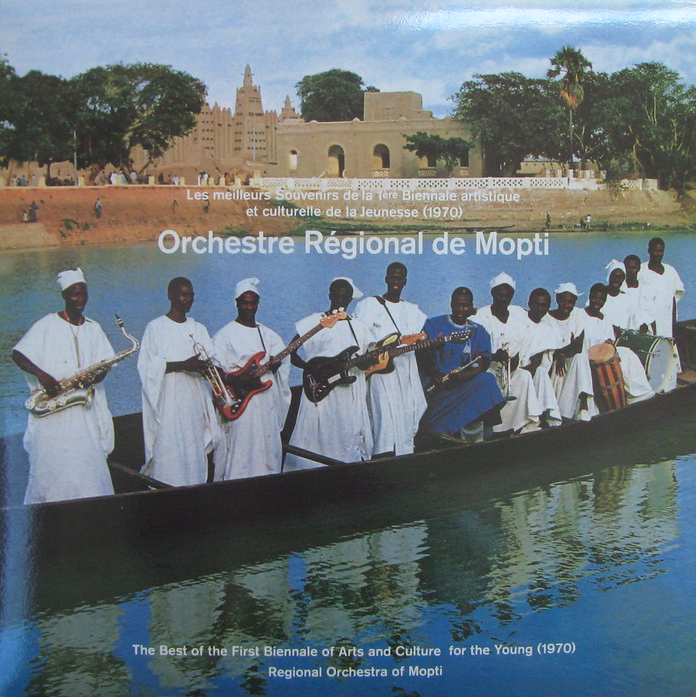 Orchestre Régional De Mopti – “Best of The First Bienniale of Arts and Culture for the Young (1970), The” – [Mississippi Records]

Although packaged and described in such a way as to suggest that the Orchestre Regional de Mopti was some sort of academic cultural exercise, what you actually hear is more along the lines of Orchestre Baobab: a large Malian dance band with some hints of Cuban rhythms (their earlier name, Bani Jazz, was perhaps more appropriate). The cover displays the group floating along Mopti in a lengthy boat, but they don’t just wear those instruments for the PR shot; there is pretty hypnotic guitar and bass work throughout the LP with horns and flute on top and a varied percussion section. All the tracks feature vocals (the last track features a female vocalist). The second track is a live recording. No band members are identified in the liner notes other than the bandleader Sorry Bamba, who would rename the group once again as the Kanaga Orchestra in the 1970s (KFJC also has Sorry Bamba’s LP “Volume One 1970-1979” which overlaps with this one slightly). ((( crimes ))) 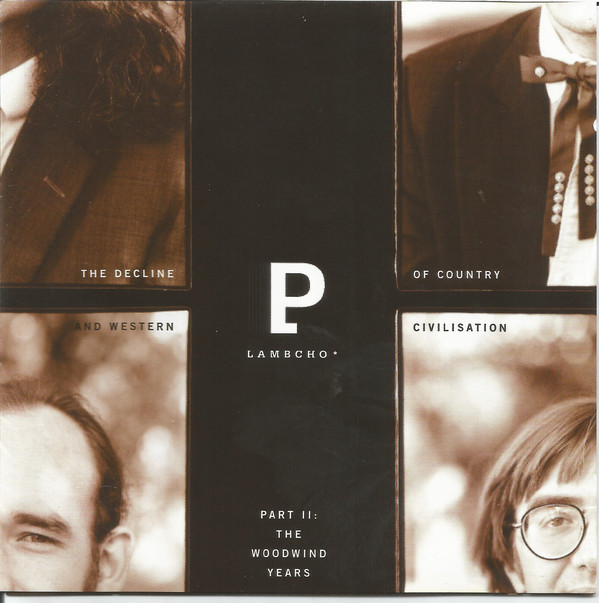 This release is actually the *third* such collection of Lambchop ephemera, this time drawing on singles, compilation tracks, alternate versions and unreleased songs from a five year period. Arranged chronologically, the earlier tracks are more experimental and charming, while the newer tracks show how the ‘Chop has refined their countrypolitain southern-dialect manifesto. Throughout it all, Kurt Wagner maintains his dry, almost whispered delivery, probably the only thing that will keep them from being booked at the Saddle Rack. It’s not always clear exactly what strange goings-on are being described in these songs, but there are moments of great beauty that speak volumes. 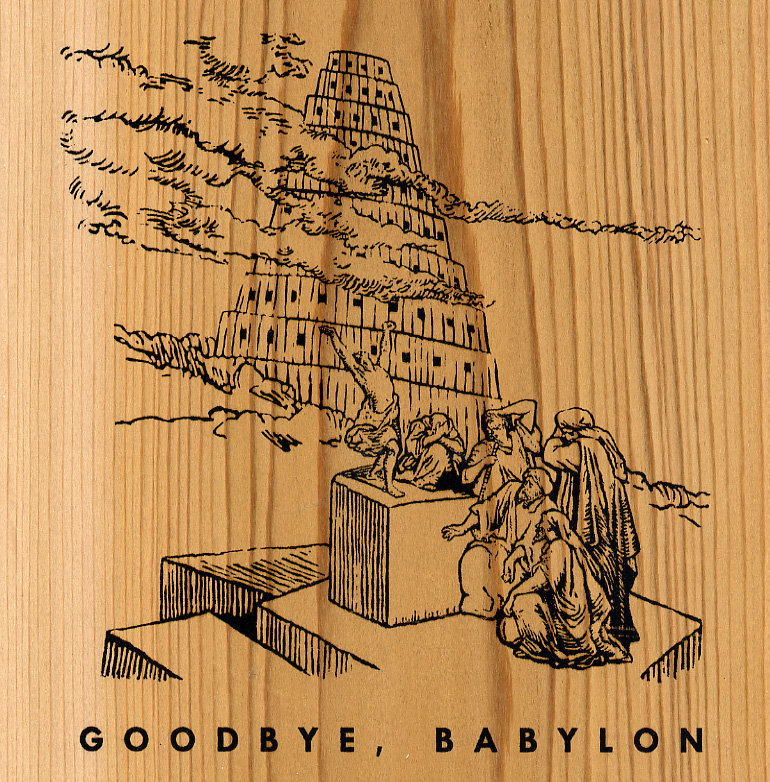 Probably the definitive collection of American religious-themed music since the dawn of recorded sound. Producer Lance Ledbetter founded the Dust-to-Digital label to release this project, calling on experts from the worlds of American music scholarship and record collecting to find the most idiosyncratic and heartfelt spiritual music drawn from all manner of styles, including gospel, folk, country, blues, and jazz, as well as fiery sermons delivered by ministers who often were just as popular as the musical artists of the time. Over 150 tracks span the 6 CDs here, mostly transferred from 78 rpm records, with the sermons taking up the entirety of the sixth CD. And drawing on his experience as a radio programmer, Mr. Ledbetter sequenced each disc by themes, rather than genre, resulting in a huge variety of styles on each disc, far more rewarding for extended listening than a purely chronological or genre-specific collection would have been. As if that wasn’t enough, the set is accompanied by a massive paperbound book that provides biographies of every artist, as well as useful historical and/or cultural information to give some context to each selection. It’s nearly impossible to single out any individual tracks as standouts, given the overall quality and quantity of the contents, but suffice to say that those who enjoy the full spectrum of American music forms will find plenty to get excited about here.