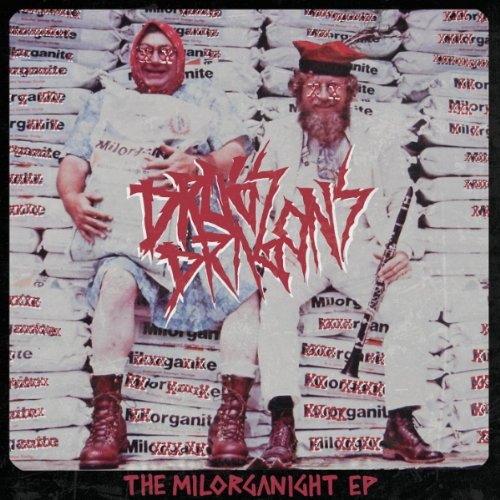 No connection to the children’s show. This Milwaukee four piece had
me at “Braingrave” on their first 7″ and this latest six song ep
keeps the toxic charm alive, concluding if not concussing, with a
cover of Brainbombs’ anthemic “Burning Hell.” Like the ‘bombs,
Drugs Dragons know the vital importance of big hanging power
chords, and tantrum redrum singing. The pace is urgent, the message
less so. But it is fun, like watching a friend on the floor close
to oblivion, somehow find the focus to rise up and juggle some
flaming swords. Those swords are the riffs, check out how
“Pestilence in the Flesh” builds and winks briefly at Devo.
Puke Drugs’ vocals carry the phlegm and distortion fitting his
nom du spume. The title track evidently is an homage to Milwaukee’s
*other* finest, some fetid fertilzer. In decay and death, the Dragons
thrive. “Icicle” in other hands could be power pop, with its
stagger rhythm, but they get right wretched (yet keep the
toy piano in the mix). God, I think they might have cussed at the
end of that track, but it’s hard to tell. I’m dizzy. Whereas they
mostly ride the pummel, “Staring Into the Blue Screen” has
fits of spaced out (for them) wandering psych before hammering
away again. And on the Brainbomb cover, looks like they forced
rotation of instruments to keep that sloppy stench strong.
Most songs track, giving this a live, off-the-cuff vibe which
is probably part of the Drugs Dragons credo. Oh, and it looks
like the children’s show is not released….yet