German band The 39 Clocks hit the scene in 1979, with their debut release “Pain it Dark” hitting shelves as an LP in 1981. Last year it was reissued in CD form, with an extra bonus track (“I Love a Girl”) included in the package.

Very much influenced by Velvet Underground and sounding similar to the VU-influenced band Felt, 39 Clocks give us some timeless beauty with simple orchestration, occasional sax, prominent keyboard, and dead-pan vocals. At times it’s psychedelic, mystical (particularly on the track “Psycho Beat”) and hazy. Referred to as originators of the “psycho beat” style of music, it’s definitely a satisfying listen that stands the test of time. 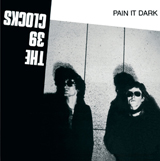 you heard it 71 times on kfjc! most recently: