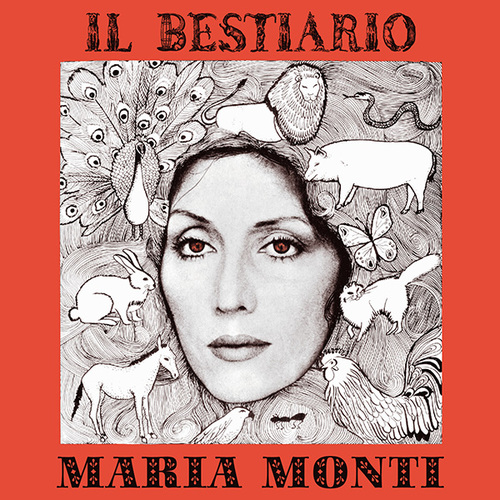 Italian singer and actress Maria Monti began her career singing traditional ballads in the cabarets of Milan in the 50s, and later appeared in several popular films in the 60s. But in the 70s, her musical work veered off into strange new directions that are on full display on this lost 1974 record, a jewel unearthed and reiussed in 2012 by Unseen Worlds. On these ten tracks, arranged by avant-garde composer Alvin Curran, Monti brings to life the lyrics penned by poet Aldo Braibanti, accompanied by Curran’s synths and Steve Lacy’s free jazz saxophone. Il Bestiario has as many wildly varied styles as creatures in a zoo, from the intimate jazz of “Dove” (T2), the rollicking chanson “No no no no” (T3), the smoldering piano ballad “Il Serpente Innamorato,” the wistful folk and birdsong of “L’Uomo” (T6), and the midwinter’s meditation “Il Letargo” (T9), but all are connected by Braibanti’s lyrics that evoke surreal images of animals. The one exception to this theme is the album’s finale, an expressive, borderline-New Age reflection on the four elements, “Aria Terra Acqua e Fuoco” (T10). Like the recently reissued albums of Brigitte Fontaine and Lena Platanos, this is another instance of work from an adventurous female artist finally getting the wide release it deserves.

you heard it 58 times on kfjc! most recently: