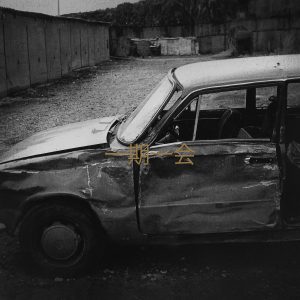 This post-metal band’s actual name, pronounced something like ‘Muyuubyousha’ consists of four Japanese characters and does indeed mean ‘Sleepwalker.’ Confusingly, there also exist both an American Black Metal band and a Japanese Jazz group of that name– and THIS Sleepwalker, unconnected to the other two BUT featuring Japanese and American members, might be described as a Black Metal/Jazz combo. The guitar/bass/percussion trio collaborate remotely, having never met: one from Japan, one Russia, one America. This 2018 LP is their second release. Its title translates as ‘For This Time Only, Never Again.’ The phrase is a Japanese proverb or cultural concept based on treasuring the ephemerality of one-time meetings with strangers, or so this gaijin believes after a quick Google search (is there any other kind).

Frequently surprising without being jarring, ‘Ichi-go Ichi-e’ manages not to sound stitched together even though it literally is — members improvise their parts and combine them via remote collaboration, following the melancholy dream logic of their collective vision where it takes them. The finished product seems to draw evenly upon Depressive Black Metal, Japanese Psych Rock, Avant-Jazz, Trip-Hop, Morris Minor’s Prog 8-tracks, and traditional Eastern musics of various kinds. While comparisons to certain other BM vivisectionists may be apt up to a point (Mamaleek, Diapsiquir, Oranssi Pazuzu, Clouds Collide) they have a pretty unique sound going on, exploring a vast breadth of style on this fairly brief album. I was nodding my head to a jaunty Jazz lick one moment, then splattered by nocturnal slashers the next; and that’s how people grow up. Vocals, like important thoughts, are mostly howls and whispers. Like a heroin addict’s last shot, this shit works much better than it ought to. I guess that must mean some amount of consideration went into it. Play it for everyone you’ll never get to know.