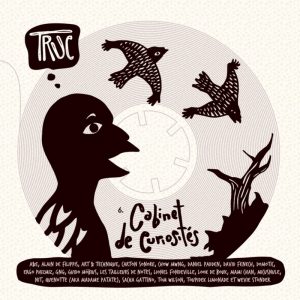 Hodge-podge from the white-lodge and a donation by our
chief engine-ear, salud Monsieur Earl Grey! We get a
French fried compilation of world-wide ingredients.
Some of them quite aged as the liner sheets indicate
1982 Look de Bouk with Martial Canterel on board. The
collection is a blast, with plenty of toy joys, cartoony
tunes, and audio oddities to keep you on your toes while
still keeping your toes tapping. It’s often peppy in the
most charming, infectious way. Several artists summon
choirs, Daniel Padden (Volcano the Bear) and lead-off
Lionel Fondeville, so the album feels larger than a lot
of tinkerers tailoring their keys to your quirky needs.
Some faves, Sacha Gattino was sorta a what if Arvo Part
was happy but then he adds in bleepy ping pong. #12 A&E
has a japanese folk chant while playing Operation and
turns a wrenched ankle into Cibo Matto-esque rap-ture.
Tracks cover a lot in a short time, with speed traps
from De Felippis and magic monkeys with Wevie Stonder.
Wevie’s one of the few projects KFJC has connected with
in the past, several artists on here make their debuts
ANY where. Tres cool. Art Brut toot suite case.
Really a do not miss release! -Thurston Hunger