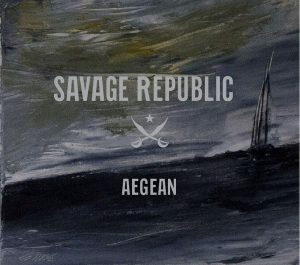 Continuity is king in this Republic. They lost
their founder some time ago, but the band marches
on in this their most recent (2014) full length.
Literally marches, that heavy martial beat remains a
staple (opening track hits with huge cinematic action).
Slashing, reverby guitars with trace elements of
almost shoedive Lots of intros, voice shouted from the
ranks of rebellion. And this once upon an LA art
scene band return to their Grecian formula/friction
for this, with former Tuxedomoon-man Blaine
Reininger providing violin worthy of an oracle.
Emad Gabra’s oud slithers in on two others. Stella
Papanyydreopoulou sing soothes on the title track,
that’s really part of a song cycle from tracks 7-9.
The whole album is very well sequenced, a polished
flow to it. Themes appear and are reprised. “Omonia”
offers a brief different angle, hustle and funk with
a No-Wave verve, and cool male chant vox!! And right
before it short, sweet backwards “Exarchia.” If this
album is a riot, it is a well-structured one ;>
-Thurston Hunger