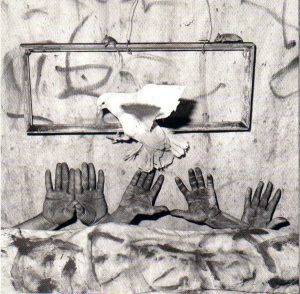 Clevelad Matthew Wascovich fronts a pretty snazzy revolving
door. Borbetomagicians and Sun City gargoyles have visited
at times past. On this release the crew includes Minuteman
Mike Watt, Weasel Walter wreaking drum punishment and
stealing the show, Steve Mackay. Steve’s sax really stands
out on his work during side C of this gatefold grinder.
When he first shows up on the shutdown breaks in “Us Pushy”
things sizzle a little differently. Wascally Wascovich
looks to pump up Stooge energy, and the abstract lyrics
professed over punk does connect back to Watt’s early
ways. Maybe a hint of “Camper van Beefheart” in the mix
too, but mostly the song are choogling guitar 4 by 4, with
rhythm guitar (Doug Gillard of GBV?) up front, and then
other guest guitarists kinda noodling around the chords.
Gets a little airtight at times, that’s where Mackay (RIP)
was so crucial for me. Wascovich kinda punches his poetic
pontifications, with a heavy right hook on the chosen
title/repeated mantra. Double-tracking his speaksong,
especially through effects early on in the record thickens
things. “Everything Zenith” is an outlier with its Paris,
Texas slide while a blindman cuts hair big scissors.
“Dunedin Signal” is also a little different as the chord
heavy distortion thins out some, still plenty o’ noodleage.
I wonder if he didn’t publish his lyrics to focus just on
the rock core? Been marching to the beat of his latest
favorite drummer for a decade straight in his Scarred City,
while we were sleeping on this, SoT released a new album.
-Thurston Hunger