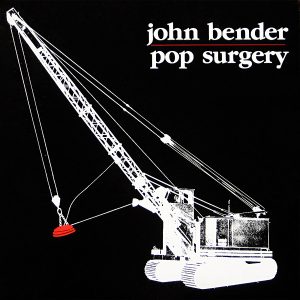 The original CB? Circuit Bender? 1983 was when Bender’s
third and then final release came out, reissued right on
time 35 years later by Superior Viaduct. Well there was
some Record Slut and also mighty Vinyl-on-Demand action,
but the notion that Bender was ahead of this time is
pretty clear. Synthesized Cincinnati eclectic electronics
in the attic. Calling it “Pop Surgery” was a nice slice
of genius, as the tracks have a catchy wave to them,
it’s not a series of knob goblin spins. The percussion
too is almost cute and precise like a wind-up toy. The
music reminds me for some reason of the old Mattel
Merlin. More Cabaret Voltaire than Barnes and Barnes.
But the speak-sing, repetition of vocals and post
processing of them as well (see the end of “Blue”
or alien-tweaking voices on “Cows” where Bender’s
then-young song Max sneaks in) adds a spoonful of
sugar to the Surgery. His vocals can sometimes feel
like an old instructional video (“Dance” which you
can crossover to Detroit beats no problem).
Apparently the numbers with the song titles
indicate tapes from his bedroom/sonic laboratory
work. And he clearly likes having fun with the
tape itself, as on “Dance” and Amalgamelon.”
“Glass” is sharp, and a fave, just great sound
construction and a little disarming. “Meat” too
tastes sweet with a hint of cognitive dissonace with
a killer hook, well a meathook. Tracks come fast,
Faust and furious, but biting off two in a row in
a set is alright since it too 3+ decades for KFJC
to connect. -Thurston Hunger