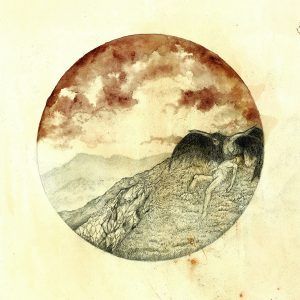 The brand new CD from Boston’s Funeral Doom frontrunners, whose legendary show at the Sutro Baths in 2014 (alongside Akatharsia and Badr Vogu) won them many admirers around these parts.

There’s a LOT of shitty ‘Hipster Doom’ out there these days–I’m not going to name names– BUT Forn absolutely is the genuine article. Take it from someone who’s picky about his Sludge/Doom (as Encyclopedia Metallum so authoritatively describes them). I googled ‘Hipster Funeral Doom’ and the only thing that came up was a 4chan thread where the term was deployed against Ahab, a band I actually love, and not a bad touchstone in this case, really.

Given their city of origin I think everyone half-expects this band to start sounding like Grief at any second, but there’s truly not much Sludge to be found on this release (except maybe the incredible grooving riff on t.5, one of the best songs). The largely creeping pace, echoey psychedelic guitar work and profusion of delicate interludes impart a certain thoughtfulness to this forward-thinking champ of an album, and here the band have earned the right to be mentioned in the same sentence as American Funeral Doom saints like Asunder and Evoken.

Accomplishing so seamless a merger of tenderness and brutality is no easy task for any metal band, much less one formed a mere 6 years ago; having two guitarists is of course an integral part of their complex sound, as is their fondness for sudden shifts from soft to loud. Tasteful Death Metal touches, including quite surprising ones on t.s 6 + 11, do not detract from the sense that Forn are a Doom band first and foremost, in love with stupidly big, slow, heavy riffs. Growler Chris Pinto, who once came over for some reason to the house in Boston where I lived for a time, is a versatile extreme metal vocalist and his spirited performance is also integral to this band’s sound, much in the way that the Bay Area’s own Swamp Witch couldn’t exist without Jimmy’s distinctively guttural interjections.

Speaking of the Bay Area, look for KFJC pit veteran Jessica Way (Worm Ouroborous, Barren Harvest) delivering an emotive, Current-93-esque performance on t.10, in what seems to herald the emotional climax of the album. This track, along with t.s 1, 4 + 7, is among the aforementioned delicate interludes and may appeal to non-metalheads also.

No track listing or lyrics included with the sleeve, but it’s safe to say ‘Rites of Despair’ is not coming from a happy place. Oh yeah, and Forn is Old Norse/Icelandic (same thing lol) for ‘sacrifice.’