Sophia – “This Year Give a Share to Sophia” – [Lichterklang] 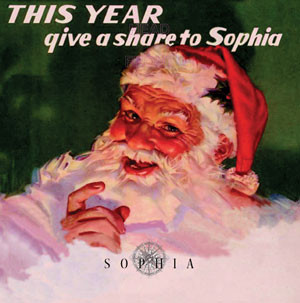 Just in time for the holydaze, here is the 2017 Christless single from Sweden’s masters of hopeless, gothic Martial Industrial. Bring it back again for this year’s meretricious airwave revelries. Hit the killswitch and be better than human as you learn to fail with members of Cold Meat Industry superstars Arcana, who bring you two hammering battlefield ballads of holiday blues resignation and distinctly Scandinavian moroseness. This material is more song-based than some of their earlier work, and perhaps even more so than the lyrically-driven compositions on 2016’s devastating ‘Unclean’ album. Peter Bjargo, the head Sophian, is also married to Arcana/Sophia siren Cecilia Bjargo. Continuing the 50s theme, hear Him on side A and Her on side B, both in full bah-humbug mode. More of an elegant Martial Pop sound on side A that gets into Allerseelen territory. Side B is the lurching, too-drunk-at-the-Christmas-party spiteful (Lina?) Barbie doll. Both sides are genius because this band can do no wrong. Plays at 45.