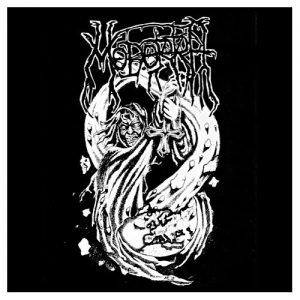 Modorra (Spanish for ‘Drowsiness’) is a Death Metal project from the Islamic Republic of Sweden, boasting strong patinae of grindcore and punk. Coming from Gothenberg, they have a very particular sound looming over them in a historical sense, but this is absolutely not melodic DM: the closest they get to Entombed is in occasionally sounding like Nihilist– and is that not just the recording quality? I might as well say they sound like Hellhammer in that case (they kind of do).

Ultra-low-fi, scratchy, crackly shit pressed to 300 copies of 45rpm 12″ made from harvested gender-neutral cartilage instead of vinyl. Decked with D-beats and splattery grind blasts. The mad and jaundiced rickety rush for the end is in line with the kangpunk bands for which Sweden is also known, e.g. Mob 47. Thankfully no politics here, just decay and violence. Singer sounds like he’s about to throw up throughout. Lyrics are actually semi-intelligible. Have seen them described as Grindcore, but this is encrusted old-school DEATH worship appealing to KFJC’s extensive collection of Necrot, Abscess, and Repulsion releases. I think this was recorded drunk. I hope so.