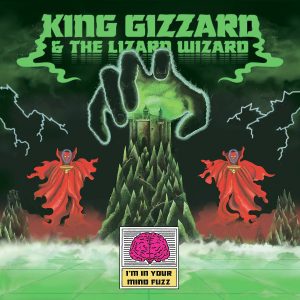 Fuzz from Ozzz. 2014 release from his hard-working septet from Melbourne. They roll with two drummers in case one of them has to go to the bathroom or have a heart attack, right when a guitarist is hitting his groove. Side A pretty much tracks straight on through, some kind of funky tape edits and manipulation at times, but the jams aren’t going to kick themselves out. How much do they love their 1-4-5 drive to stay alive on this release, they pay a guy to play harmonica. Paying their rhythm and dues! Stu Mackenzie is the guiding force, on this album he’s got the boys on a journey to the center of the pysch earth. He pens some killer hooks and is not afraid to bust out the flute when needed. Other albums (they release 3 every
15 days or somesuch) go for more prog moves, or more chipper pop (at other times his voice and songs remind me of Game Theory).
But this 12″ released in conjunction with Thee Oh Sees’ label is a solid modern hippy trip (they even borrow John Dwyer’s Boss effect that gives guitars and vocal yelps electronic quick hiccups).
B side offers a more mellow shade of fuzz. Fans of the Liverpool Psych fests, should enjoy the riff wrath.