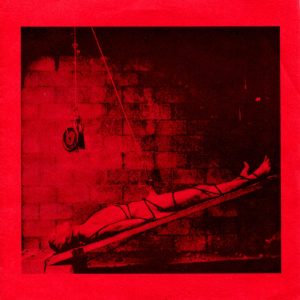 With this addition, KFJC now owns the complete back catalog of Worldmadeflesh recordings. (There is only one other release, a split 7″ entitled Japanese Torture Comedy Hour, also featuring Autoerotichrist.)

Autoerotichrist is Russell Mason of Enemy Soil (also well-represented in the KFJC library). His side is more dynamic and full of abrupt changes. It almost has a call-and-response structure at times, like being pummeled by alternating fists. The blows come harder and heavier, as you bleed out your ears.