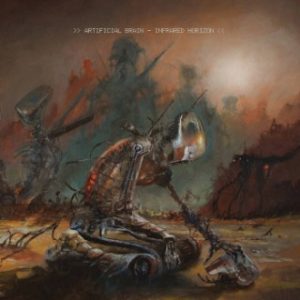 Artifical Brain, Technical Death Metal from The Big Bagel. Some members are also involved in the post-Hardcore scene out there.

Now I’m reading about Tech-Death online and I guess I don’t really know shit about it. I do like early Nile quite a bit (bite me!) but this doesn’t really sound like early Nile, at all. Portal meets Krallice might be a better reference point— and as we will see, I mean this as a compliment!

If I say I’m picky about Tech-Death I mostly just mean that I don’t like Gorguts all that much. My eternal Prog-metal nemesis Colin Marston, who plays in Gorguts (and Krallice), actually co-produced (with the band) this 2017 sophomore effort, as well as recording and engineering. It isn’t really a surprise because Marston is all over the NYC metal scene. I like to give the gentleman shit in my reviews here, but his touch on ‘Infrared Horizon’ probably did have a positive impact (as it did on Mastery’s ‘Valis’ BTW).

All the music is composed by their guitarist. Dense, layered, psychotic, claustrophobic, but also kind of glittery and robotic. What sounds like utter chaos soon reveals itself to be well-structured and in some cases almost catchy Death Metal.

I think this is a rare case of a popular Death Metal band that doesn’t suck, but I haven’t seen them live yet so maybe I’ll end up eating crow. Good sound on the CD, anyway… In all seriousness, I’ve been a supporter of Artifical Brain since their first album and I’m happy for them. And the album art doesn’t remind me of the movie ‘Wall-E’ at all.