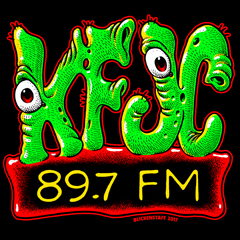 Our popular series of T-Shirts featuring designs by some of today’s top underground artists continues.

Stephen Blickenstaff has been creating graphics and illustrations for bands since the early 80’s. Inspired by the 60’s monster culture, Steve’s work is often described as a twisted blend of horror and comedy. His work has appeared on album covers, T-shirts and posters for bands such as The Cramps, Los Straitjackets, Southern Culture On The Skids, The Fleshtones and They Might Be Giants. Steve is also personally involved in the music scene.
He currently plays theremin with the instro surf band the Atomic Mosquitos.

The KFJC Artist Series T-Shirt is available on a black, 100% cotton shirt as our thanks for your generous donation of $45 or more.