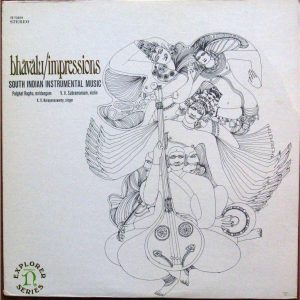 South Indian (Carnatic) instrumental music played by an ensemble featuring Palghat Raghu on mrindagam, the Indian barrel drum, and V.V. Subramaniam on violin. The violin was introduced to India in the late 1700s, and it’s fascinating to hear its sound was radically transformed through the use of ‘alternate’ tunings and modified techniques (including the use of oiled fingers to facilitate slides.) The mrindagam has a sharper and more powerful sound than the tabla, and it often takes the lead, for example on side A. The music of the north and south are both based on ragas, or modes, but in the south these are supplemented by composed, and often intricate, melodies upon which further improvisations are built. As a result, the music on this album requires a little bit of focus on the part of the listener, but it’s well worth it!