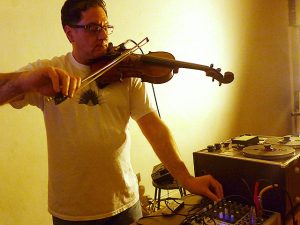 A set of three pieces for solo violin, with and without electronics, all composed to accompany the dances of Leyya Tawil. On the first track, Tawil’s footfalls share sonic space with Mike Khoury’s barely there harmonic flutters. There’s a lot of space in this piece, and you’re left to imagine the visual element. The second track opens with a slow, repeated chime, but quickly grows into a sprawling morass of wailing drones as Khoury utilizes electronics to double and triple up on himself. Eventually, everything fades away, and the piece ends on the same note it started. The last track is similar to the first one, with Khoury upper harmonic explorations mingling with the suggestive sounds of bodily motion, both dissipating into the reverberant space. This limited edition CD-R was released on Khoury’s own Detroit Improvisation label, founded in order to document his personal journey as an improviser.