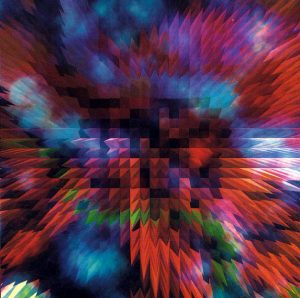 Coil seem to be legitimately famous now– posthumously of course, and is that not always the way? Every record store with a separate ‘Gothic and Industrial’ section seems to have a bunch of their records now. The erstwhile lovers and longtime counterparts Jhonn Balance and Peter ‘Sleazy’ Christopherson were legends long before they were legendary and the exposure probably would have irritated them.

Originally released in 1995, this is a reissue from this year of what may be Coil’s most abstract recording. Taking a page from Brian Eno’s book (or a card from his deck?), the Industrial mad scientists/ritual magick practitioners employed aleatory (that is, chance-based) methods of composition, subjecting their own minimal session recordings to a variety of software-driven manipulations. Balance and Sleazy dubbed the incorporeal third member whose collaborative intentions emerged from the randomised manipulations ‘ELpH.’ I’m not clear on the exact details of the methods the band employed, but it seems likely that drugs were involved, possibly MDMA, as contrary to popular belief the diagnosed schizophrenic Balance was not a real-life fan of ‘Love’s Secret Domain’ (I’m not so sure about Sleazy).

This is not ‘glitch’ in the Techno sense. Whispy, spectral, often barely musical, sometimes quite queasy and frequently possessed of an otherworldly beauty, this looks back to the BBC Radiophonic Workshop, Tangerine Dream and “honorary member” K. Stockhausen but doesn’t really sound like them and gosh, I guess nothing that’s come out since really sounds like this either. Coming from a band who so defined the ‘song-based’ quadrant of Industrial music, this is challenging listening indeed, calming and maddening all at once.

It’s all over the place. T.2 is like getting smacked in the face with the pixelated alarm clock. T.8 might be singing. T.9 sounds like an aviary. T.12 is kind of fucked-up minimal techno, with hyper-sped-up voices. T.13 alleges to be an instrumental cover of ‘These Boots are Made for Walking.’ T.16, the most overtly musical piece, is a manipulated recording of Aleister Crowley’s wife Leah Hirsig singing part of ‘For All We Know.’ Most of the tracks are pretty short.

It makes no sense, and although vaguely in line with Coil’s other ‘drone’ works from the mid-90s, it’s quite atypical for a Coil album. If you play it for dogs or infants, they may attain samadhi.

At the end of the day, I think Coil was the best of the three groups formed out of the ashes of Throbbing Gristle. A truly singular pair of sound manipulators. RIP.

you heard it 53 times on kfjc! most recently: