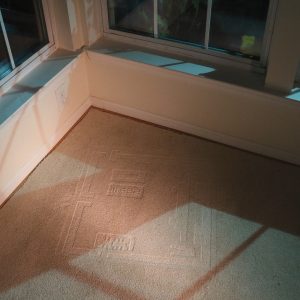 A science fiction narrative told through sound from SEF III, a trio composed of Duncan Moore, Max Eilbacher, and Alex Moskos. Composed in a barn in rural Virgina and recorded in Montreal, Selling SEF III tells the electro-synthetic saga of Phil and the SEF III computer.

Introductory Remarks (T-1) is an instrumental preview of the sounds and structures that will be on display through the rest of the piece. Meticulously unorchestrated glitch, floaty musique concret, and slooowwly tuned radio dials.  Layers of bugs and buzz-saws.  Lots of attention to static and its subtleties.

Most of the vocals are are dispassionate descriptions of scenery, stage direction, and monologues. The very notable exception are the two Machine Themes (T-2, T-11), which feature deep perfectly pitched harmonies and smooth melodies.

What I assume is the climactic battle between Phil and Sef III takes place in T-10. It’s a dizzying 6+ minute instrumental of mechanical tapping, blasting ray guns, crickets, horns, and eerie metal-machine wails. The return to the Machine’s Theme in the following and final track suggests that things do not work out well for poor Phil.