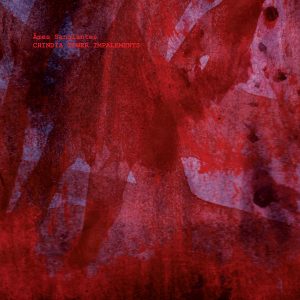 Quebecois Pierre-Marc Tremblay is internationally recognised as half of the Black Metal project Akitsa, founded in the late ’90s. What perhaps fewer fans may know is that he has been equally renowned in Noise circles for about the same span of time under the name Ames Sanglantes, trans. Bloody Souls. A.S., long a member of the Hospital Productions inner circle alongside like minds such as Prurient and Alberich, is genuinely one of the harshest and most difficult Power Electronics/Noise projects your reviewer has ever encountered.

The project’s releases often seem to be intended as abstract representations of physical violence – in KFJC’s library already are albums called ‘Street Violence’ and ‘Le Cri du Pendu’ (‘The Hangman’s Cry’). This 2018 reissue of a 2015 cassette release is in a similar vein, as it were…

Inspired by European folk hero, whoops I mean infamous sadist and tyrant Vlad The Impaler, this is Slow Execution Electronics, or as the artist would have it, “Ancient Blood Soaked Architectural Column Noise,” a nod to Vlad’s starkly fortified Chindia Tower, which stands to this day. Each of the 3 CDs in this attractive edition houses two basically endless Harsh Noise tracks reminiscent of Vomir, Richard Ramirez, Maurizio Bianchi, and Whorebutcher among others.

What’s so fascinating about this album is how it manages to create the impression of a continuous, crushing wall of noise, when in fact it has many changes happening all the time, just not obviously. To a casual listener it may create the impression of Harsh Noise Wall, but up close, the very gradual variations in the pulsing electronic tones, buried samples and crumbling distortion create an incredible sense of slow, agonizing progress, rather akin to an iron stake gradually working its way up along the spine.

Play this if Brighter Death Now’s ‘May All Be Dead’ or Will Over Matter’s ‘Power Dances’ had just a little too much going on for you. Layers upon layers of ravaged electronics create maniacal nightscapes where you’ll encounter screams and sadistic laughter (1.1), night birds ousting day birds (1.2), thunderstorms (2.1), hissing dungeons (2.2), wolves, some of which may be human (3.1), and full-on burning, twisting synth impalement (3.2). Each track is a mystifying gem of the deepest blood red. Most will drive a certain kind of KFJC listener absolutely nuts; if you’re dumb enough to pick up the studio phone please remind them that they are not actually being impaled on an iron spike and that it’ll be OK. Also recite the following: “Hail Dracul! Hail Wallachia! Hail the Underground! Hail Darkness and Oppression!”

Each track is about 30 minutes long, but you can always play part of one.