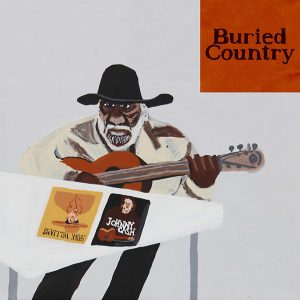 Outsider sounds from the Outback? Nah, this’ll fit just
dandy in your Country Music set (Australia *is* a country
after all). Note the Cash and Hank refs on the cover art.
The album pretty much begins and ends in the Dreamtime.
Black Allan Barker leads it off with a stirring hypnotic
spiral of a song, and Harry Williams summons Dreamtime on
the penultimate cut as well. Williams’ wife and musical
partner mentioned that Harry was buried with his guitar,
the Dreamtime Allstars band is surely legendary. Several
artists on this have died, recordings here span the years,
all the way back to 1958. The song at the very end of this
collection aptly is called “The Resurrection” recorded by
Bobby McLeod in 1987 having been reborn from his time in
jail. He and his bandmates The Kooriers also close the
first side. Prison time, literal and emotional, is a
recurrent theme. Civil wrongs and rights keep on spinning
beyond the confines of these grooves. Didgeridoo pokes
through on “Gurindji Blues”, spoons cut in on the instro
“Black and White Cat.” The Warumpi Band inject electric
boomerang boogie into the mix. Maisie Kelly’s a cappela
number is captivating, and a stellar example of song as
historical oracle. Timeless. The photos/interviews put
together by Clinton Walker for Flippin Yeah in conjunction
with Mississipi is the real gift here, even the precision
of Walker’s track ordering is striving to tell this story.
He has revived memories and music that would have otherwise
been lost. -Thurston Hunger