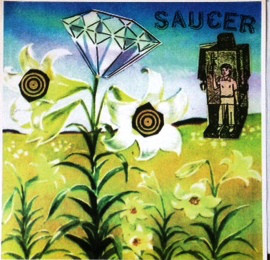 Another one for KFJC’s 7″ sanctuary of singles, 1993
Minny tinny shimmy pop (no clear Kramer involvement
though). Four piece band a la mode (two guitars).
Title track is a feedback drenched ditty which loses
its way in my ears. But you may appreciate any form of
psych flashback (or an extra two minutes to cue up some
US Saucer.) “Orange Pants” fit a lot better ’round my
head and hits a kind of Blake Babies freeze frame on the
time line. I like the dizzy guitar interplay on the verses,
and Pamela Valfer’s voice rising above them high ringing
notes to boot. Her singing also was nice on “Spoonerism”
just got engulfed. “Half Man, Half Jerk” closes our
time capsule, Jed Kersten taking over the mic with a
Lee Ranaldo-esque talk-it-while-I-rock-it, on a song for
all the brother-in-flaws. Drummer Peter Anderson gets some
nice tom aplomb and hi-hat cooking. Is this what people
did before tweeting, record short songs with hooks as
emojis? Uhayunno? Mebbe….
-Thurston Hunger