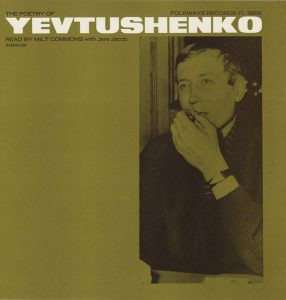 Release in 1967, and translated out of Yevgeny’s mother
tongue into our bastard English (if not pure ‘Murrican).
Recitation split into male and female, read by Milt
Commons and Jere Jacobs, they join forces to close out
side A, with Jacobs leaving her soothing style for a
more sinister one. That track, “Murder” will likely be
the hit at KFJC but I’d give “People” a chance with
its closing lines
“And every time again and again
I make my lament against destruction”
Also on here, closing out the album his “Babi Yar”
a tribute to the Holocaust victims as well as a
reported slap to Soviet authorities and rising
anti-semitism in 1961.
When I first heard about Yevtushenko it was in terms
of how Russia treats poetry and its poets, with accolades
and arenas contrasted with US (do you know our poet
laureate?) Yevtushenko died on April 1st 2017, in Tulsa
where he had been teaching, and still fighting for human
rights.
-Thurston Thurstonovich