Jesse (from folk band Fern Knight) plays the Lever Harp, which is those gorgeous tall harps that consist of 27-38 strings usually. The classical “goddess” style harp that creates the gorgeous mellow tones. Eric plays the Upright Chaturangui, which is a guitar with a super thick neck and 22 strings and usually played in the lap with a slide. A sound that’s heard a lot in Indian music, it has the higher zen like trance-drone enduring sounds. The ones that cascade over like waterfalls of shooting stars. This album is two 17 minute tracks, both incredible. Lots of finger picking, electric and acoustic strings, a tone always floating. An ethnic flair. The intensity is raised on the second track, with addition of a snare drum. Drum cadence, party of one. 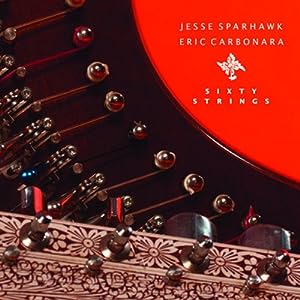